UFC 269 Oliveira vs Poirier Picks: Strike Strong Like a Diamond

Charles Oliveira defends his UFC lightweight championship for the first time on December 11 against Dustin Poirier. Poirier's strikes should give him the advantage to end Oliveira's reign before it begins. See more in our UFC Fight Night betting picks. 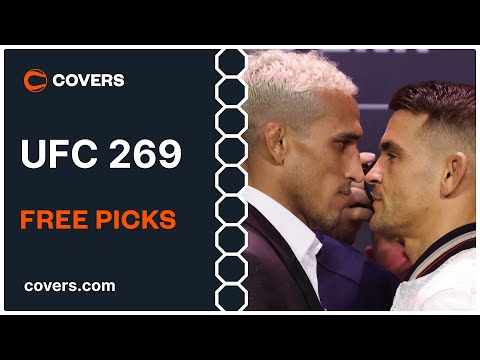 Charles Oliveira vs. Dustin Poirier is the main event for an action-packed card of UFC 269 betting on December 11.

Oliveira will be making his first defense of the lightweight championship against Poirier, who is fresh off back-to-back finishes of Conor McGregor. UFC betting lines opened with the challenger Poirier installed as a -160 favorite while Oliveira comes back at +130.

Here are our best free UFC 269: Oliveira vs. Poirier picks and predictions for Saturday, December 11 from T-Mobile Arena in Las Vegas, Nevada.

Odds courtesy of FanDuel Sportsbook as of December 1, 2021.

Canada: Get 100/1 odds on Dustin Poirier to win ($1 max) vs. Charles Oliveira at BetVictor. Claim Now

Charles "Do Bronx" Oliveira claimed the vacant UFC lightweight title with a second-round knockout of Michael Chandler in May. It's been a long climb to the top for the 32-year-old who was finished four times in six fights between 2015 and 2017. Since then, he has found his groove in the 155-pound division, reeling off nine wins in a row.

With an extensive background in BJJ, "Charlie Olives" is one of the best grapplers in the world and holds the UFC record for submission wins with 14. However, he has vastly improved as a striker with three of his last five wins coming by way of KO/TKO.

It isn't often that the challenger is the betting favorite in a title fight, but Dustin "The Diamond" Poirier turned down his chance at the vacant belt for a couple of big paydays (and revenge) versus Conor McGregor. Poirier knocked out McGregor as a +265 underdog in January and then picked up another TKO win in July after Notorious suffered a broken tibia in the first round.

Poirier is 8-1 in his last nine fights with big wins against Justin Gaethje, Max Holloway, Eddie Alvarez, and Anthony Pettis. His lone loss during that span came in his first title shot against Khabib Nurmagomedov two years ago.

The 32-year-old is a very strong all-around fighter who combines some of the best technical boxing in the promotion with good grappling ability.

Oliveira vs Poirier tale of the tape

One of the biggest criticisms of Oliveira prior to his bout against Chandler was that he didn't have the mettle to recover from early adversity in a fight. He proved that wrong by almost getting floored by Chandler in the opening round before bouncing back with a finish of his own early in the second. That said, the fact that he was tagged so much by Chandler in the early exchanges does not bode well for his chances against Poirier.

Poirier doesn't load up on his strikes like Chandler but he's the better technical boxer, and his superior defense and patience will make it far tougher for Oliveira to find openings. Oliveira's path to victory lies in taking this fight to the mat, but even there Poirier has the tactical ability and resilience to get out of tough spots.

When the fight stays standing up, Poirier will be able to land his hands. And if he can drag Oliveira into the deep water of later rounds, he will have the advantage there as well.

Oliveira hasn't been troubled too much on his feet during his winning streak, but he didn't face any strikers on Poirier's level during that span and Chandler almost dropped him with a big right hand. Charlie Olives was knocked out four times earlier in his career against Paul Felder, Max Holloway, Donald Cerrone, and Cub Swanson, so he can be put down by strikes.

Poirier has plenty of power and four of his last six wins have come by KO/TKO. The two victories that didn't were against Dan Hooker and Holloway in a pair of 25-minute battles where Poirier landed 131 significant strikes to Hooker's head and 153 to Holloway's. I'm not calling Oliveira chinny, but I don't see him withstanding that sort of punishment.

While I expect Poirier will eventually get the finish, I don't see it happening early. Oliveira tends to be a fast starter, but he will be wary of Poirier's striking and utilize a similar gameplan to what he used against Tony Ferguson last December: slow down the pace with grappling and control.

Poirier will be cautious of Oliveira's submission skills and will attempt to feel him out with distance management in the opening rounds before using his cardio to take over.

UFC 269 Oliveira vs Poirier Picks: Strike Strong Like a Diamond
Provided by

UFC Fight Night Holm vs Vieira Picks and Predictions: Holly Proves Too Much For Vieira
Rohit Ponnaiya | May 21, 2022

UFC 274 Namajunas vs Esparza Picks and Predictions: Cookie Monster Too Tough to Crack
Rohit Ponnaiya | May 7, 2022

UFC 274 Oliveira vs Gaethje Picks and Predictions: Saturday's Weigh-Ins Have Changed the Narrative
Rohit Ponnaiya | May 7, 2022

UFC 274 Cerrone vs Lauzon Picks and Predictions: Cowboy Goes The Distance
Danny Howard | May 7, 2022
About Us
Contact Us
Careers
Our Team
Brand
Testimonials