UFC Fight Night heads back to the Apex in Las Vegas for this weekend's card, headlined by two bantamweight fighters with serious strength. Our UFC betting picks break down which fighter we think will win between Sandhagen and Yadong. 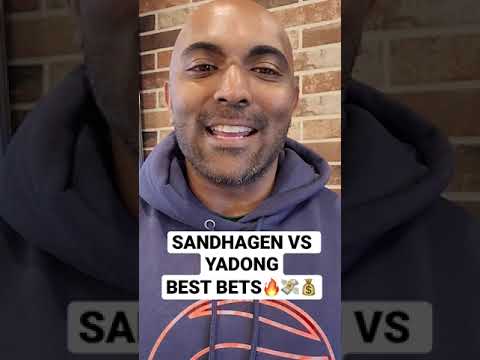 Cory Sandhagen vs. Song Yadong is the main event for UFC Fight Night betting on Saturday at the UFC Apex in Las Vegas.

This should be a banger between a pair of Top-10 bantamweights that prefer to stand and strike. UFC odds opened with Sandhagen as a -200 favorite with Song coming back at +170.

Here are my best free picks and predictions for UFC Fight Night: Sandhagen vs. Song on September 17.

Cory "The Sandman" Sandhagen is the No. 4-ranked bantamweight contender and is fresh off a unanimous decision loss to Petr Yan for the interim title.

Sandhagen is just 2-3 in his last five fights, but his other two defeats during that span came against current champ Aljamain Sterling, and No. 2 contender T.J. Dillashaw — who claimed a split decision despite 17 of 23 media outlets grading Sandhagen as the winner.

The 30-year-old is a long and athletic fighter that combines dynamic striking on his feet with dangerous ground and pound.

Song Yadong made his UFC debut as a teenager in 2017 and has since compiled an 8-1-1 record in the octagon. He's on a three-fight winning streak, most recently knocking out Marlon Moraes in the first round in March to claim his fourth Performance of the Night Bonus.

The 24-year-old has some of the cleanest boxing in the division with lightning-fast hands and good footwork.

Sandhagen vs Yadong tale of the tape

Song has very good hands and we have seen Sandhagen a bit exposed against stocky boxers like Yan and John Lineker before.

That said, Sandhagen has more diverse tools as a striker with a longer reach and better kicking ability than Song. He also has underrated offensive wrestling ability which he tried to implement against Yan and should have more success with against Song's weaker takedown defense.

Sandhagen might be coming off back-to-back defeats, but he earned a Fight of the Night bonus for his clash with Yan and arguably should have won against Dillashaw, both of whom are a level above anybody Song.

Sandhagen should be able to get the win on Saturday, especially with the pace that we have seen him keep up for 25 minutes against a guy in Song who has never fought more than three rounds in the promotion.

While the bantamweight division doesn't typically feature as many knockouts as the higher weight classes, both Sandhagen and Song have stopping power which we've seen in highlight-reel performances.

They also both prefer to stand and strike which should mean plenty of action inside the smaller octagon at the UFC Apex in Vegas. With this fight scheduled for 25 minutes, the chance that one of them ends this early is better than oddsmakers predict.

Song hasn't been knocked out since he was just 19 years old, but Sandman's last two wins have come by KO/TKO inside of the first seven minutes and he's the most explosive striker that Song has ever faced. At better than a 4-to-1 payout, that gives plenty of value on this prop play.