UFC Fight Night Holm vs Vieira Picks and Predictions: Holly Proves Too Much For Vieira

Despite her age and having not fought since October 2020, Holly Holm still has what it takes to dominate fights inside the bantamweight division. Our UFC betting picks are backing her to prove it once again — this time against Ketlen Vieira.

Holly Holm vs. Ketlen Vieira is the main event for UFC Fight Night betting on May 21.

These Top-5 women's bantamweight contenders will look to line up an eventual title shot. The former champion Holm is currently installed as a -250 favorite after opening at -200 when UFC odds hit the board for the event.

Here are our best free UFC Fight Night: Holm vs. Vieira picks and predictions for Saturday, May 21 from the UFC Apex in Las Vegas.

Holm is the No. 2-ranked women's bantamweight contender and is coming off back-to-back wins against Irene Aldana and Racquel Pennington. The 40-year-old has won four of her last six fights, with those losses coming against elite fighters in Amanda Nunes and Chris Cyborg.

"The Preacher's Daughter" is a fantastic striker with excellent boxing and vicious kicks. As a matter of fact, she was a multiple-time world champion in boxing and was named the Ring Magazine fighter of the year in 2005 and 2006.

Ketlen "Fenomeno" Vieira is No. 5 in the bantamweight rankings. She's fresh off a unanimous decision victory against Miesha Tate last November bouncing back from a decision loss to Yana Kunitskaya earlier in the year.

The 30-year-old has split her last four fights and is 6-2 in the UFC. Fenomeno has a background in BJJ and Judo and prefers to take things to the mat where she can control the fight with her grappling ability.

Holm vs Vieira tale of the tape

Holm is 40 years old and hasn't fought in nearly 600 days but she hasn't been reliant on speed or athleticism in recent years so she still has the tools to win this fight. Although Vieira looked much improved in the striking department against Tate, Holm is on a completely different level.

Holm's terrific movement, technical kickboxing ability, and striking defense should give her a sizable advantage against Fenomeno.

Vieira's best chance of victory will come with taking this fight to the mat, but Holm defends takedowns well and is very comfortable in the clinch position. Look for Holm to show that she still has what it takes to gatekeep the top of this division.

Holm is probably best known for her head-kick knockout of Rhonda Rousey in 2015, but five of her seven wins in the UFC have been via points, including each of her last three.

Vieira was knocked out by Aldana three years ago but that's the only time she's been finished in her MMA career and the only time she has even been knocked down in eight trips to the octagon.

Expect Holm to pick up the win but Vieira should be able to slow down the pace of the fight and drag it the distance with her grappling ability and durability. 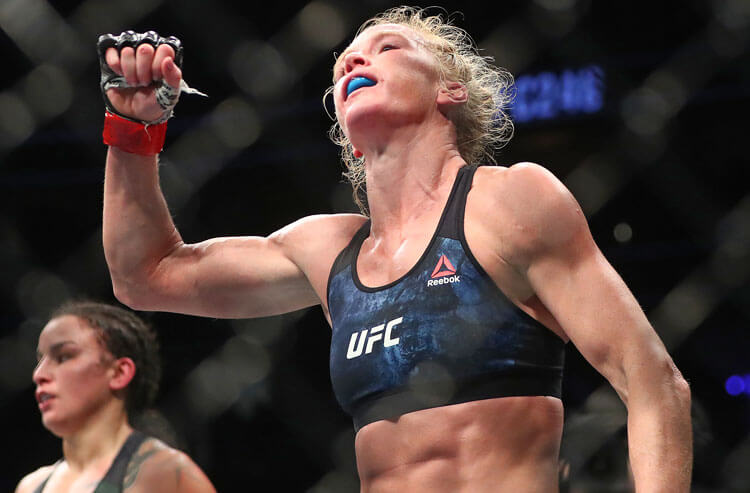 UFC Fight Night Holm vs Vieira Picks and Predictions: Holly Proves Too Much For Vieira
Provided by

UFC 276 Volkanovski vs Holloway Picks and Predictions: Revenge to the Max
Rohit Ponnaiya | Jun 30, 2022
About Us
Contact Us
Careers
Our Team
Brand
Testimonials