In a fight between two middling opponents with contrasting styles and slim margins, we're siding with the momentum and impetus of Bill Algeo — see why with our UFC Fight Night betting picks.

Andre Fili vs. Bill Algeo is scheduled for three rounds in the featherweight division as a featured attraction on the Saturday, September 17 edition of UFC Fight Night from the APEX Center in Las Vegas. Fili has gone winless in his last three fights, and Algeo is hoping to add further misery to his veteran opponent.

Though he hasn’t scored a win in two years, Fili is a narrow -130 UFC odds favorite to return to his winning form. Algeo steps in on short notice to face Fili, and he’s at +110 to score the upset.

See how our Fili vs. Algeo picks see this bout going down.

Fili has always been a reliable journeyman at featherweight, but his recent struggles and performances suggest that he’s starting to feel the strain of a long career. With only one win in his last five tries, Fili cannot afford another loss here. Algeo is the one coming into the fight with momentum as he’s won his last two fights, with a notable win over Fili conqueror Joanderson Brito last January.

Algeo has a fundamentally balanced offense in striking and on the ground. He lands 5.73 significant strikes per minute at 54% accuracy and averages 0.92 takedowns per 15 minutes. 10 of his 16 wins have been finishes, almost split evenly with six submissions and four stoppages. This is a step-up fight for Algeo in a sense, but he’s facing an opponent in the midst of a downturn.

Fili has faced the best at featherweight for nearly a decade in the UFC. The Washington native is best up close, scoring 2.49 takedowns per 15 minutes at 50% accuracy, though “Touchy” is a solid striker. That being said, he’s been outstruck in his last five fights and has to take advantage of Algeo’s limited takedown defense to snap out of his losing streak.

With all that Fili has seen, a late sub is not going to shake him with everything else that’s on the line here. He’s potentially fighting for his UFC career, and oddsmakers see this as a winnable fight for him due to Algeo’s lack of quality opponents thus far. Algeo isn’t going to win a tactical contest here — he needs to push the action right away and aggressively hunt for a stoppage.

The longer the fight goes, the more it’ll favor Fili. Then again, it might just come down to how much he really has left.

Algeo vs Fili tale of the tape

While most of Fili’s losses can be forgiven, his hard luck lately is evident that there’s not a lot left for him to offer. He’s been outworked in strikes 160-210 over his last five fights, going 1-3 with a no-contest. He does have a clear path to victory against Algeo, mostly due to the fact that Algeo is incapable of defending takedowns.

Recent form favors Algeo, and he needs to get off to a hot start to ensure he doesn’t hit the mat. We can’t stress enough how bad Algeo is at takedown defense, being that he's been hitting the mat roughly four times a night over the last four years. Though a rushdown-heavy offense could leave him open for such takedowns, it's more likely to pay off than to let his veteran opponent dictate the pace.

Fili has been past his best to the point where a predictable win is now a toss-up. We’re liking the underdog to come up big at the expense of his declining foe.

Time may have left Fili behind, and as such, we’re thinking that he’ll be slow enough out the gate for Algeo to build a strong early lead. Once the fight begins to slow down, he’ll claw back, but the underdog’s crisper striking and energy will produce better scoring opportunities. As long as Algeo can avoid the mat, he’s going to go the rounds.

It might be close, but neither guy hits as hard as the other to draw a stoppage or is cagey enough to submit the other. From what we’ve seen, taking Algeo by decision is the best bet here at +180.

Pick: Algeo to Win by decision or technical decision (+180 at DraftKings) 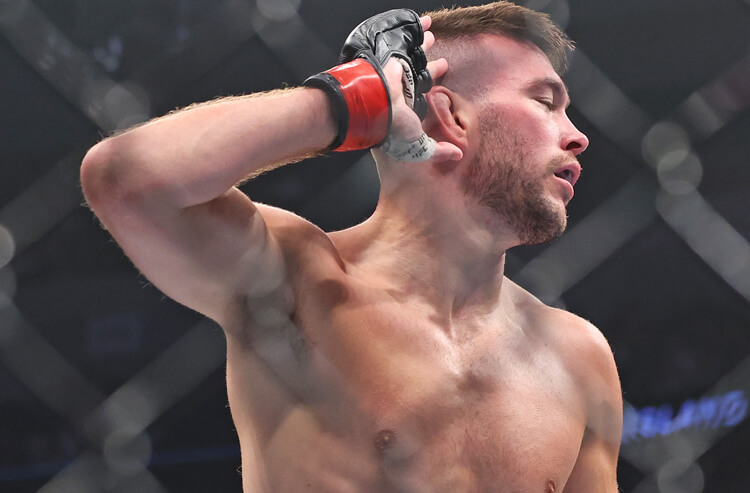