UFC 282 Morono vs Ponzinibbio Picks and Predictions: Morono Comes in at a Disadvantage

Brandon Moreno is Santiago Ponzinibbio's new opponent for UFC 282 on Saturday. Although Ponzinibbio is on the wrong side of 30, he should have the advantage against a fighter who has had little time to prepare for this bout. Read more in our betting picks.

Alex Morono vs. Santiago Ponzinibbio is scheduled for three rounds in the welterweight division as a featured undercard attraction on the UFC 282 card from T-Mobile Arena in Las Vegas.

While Ponzinibbio was expecting to face Robbie Lawler in this crossroads clash, he will need to keep that sense of urgency if he wants to beat the opportunistic Morono.

Though looking like a shell of his former self, UFC odds have Ponzinibbio as a slight -180 favorite. Morono is an improved opponent and an attractive underdog at +155.

Here are our picks and predictions for Morono vs. Ponzinibbio at UFC 282 on December 10.

It wasn’t too long ago that Ponzinibbio was on the verge of a major fight at welterweight, but a string of tough defeats has him on the verge of irrelevance. Many thought he was going to get a soft touch versus Lawler, but instead, he’s going to have to pack a lunch and get to work against Morono. Morono has won his last four in a row, and a win here with less than a week's notice will do wonders for the refined fighter.

A staph infection kept Ponzinibbio out at the peak of his powers, and he returned a shadow of his former self. Having lost three of his last four fights since resuming his career, the Argentine went from being a fight away from a world title shot to showing up at the Last Chance Saloon. While he was expected to handle Lawler, his performance against Morono ultimately will be a better indicator of where he is at this stage of his career.

“The Argentine Dagger” lands 5.00 significant strikes per minute at 41% accuracy and keeps the fight standing with a respectable 60% takedown rate. He has 21 finishes in his 28 wins, with an average fight time of 10:46. Ponzinibbio also benefits from having a complete training camp and will have slight advantages in both height and reach.

Morono comes on short notice and is trying to make a name for himself in the division. A winner of four straight since losing to a badly-faded Anthony Pettis, Morono is working behind a busy Muay Thai offense and is looking decent along the way.

“The Great White” lands 5.36 significant strikes per minute at 43% accuracy and seldom takes the fight to the ground. He has 15 finishes over his 22 wins with an average fight time of 11:37 and has increased his offensive output since falling apart late to Pettis in 2020. Since then, he’s outstruck his opponents 321-242.

We’ve seen Morono get rocked and worked over in fights he was handily winning, forcing him to hang on to survive. While that gives Ponzinbbio a better chance to win, recent form is heavily in the underdog’s favor. Either way, this should be an intriguing fight.

Morono vs Ponzinibbio tale of the tape

The catchweight of 180 pounds isn't giving Morono that much of a boost here. He’s coming off the couch to face off against a desperate fighter trying to recapture his fading glory. Because he’s relatively easy to hit, Ponzinibbio is in a great position to score a win here.

Losing to Pettis doesn’t give much hope to Morono backers. Yet, he could try and get Ponzinibbio out early by testing his questionable chin. Even if Ponzinibbio is a shell of his former self, he still has enough left in the tank to pull this off relatively easily.

If Morono had a full training camp, he could have stolen this fight. On five days' notice? We’re taking Ponzinibbio to get his career back on track.

Though we’re taking Ponizibbio, it isn’t an endorsement that he’ll return to form. Even with little notice, Morono could pull off an upset. Because of the rushed nature of the fight, it’s likely these two take their time, resulting in a slower-paced fight.

Things might heat up late or go the scorecards. That’s why we feel the best bet is the bout going over 2.5 rounds. 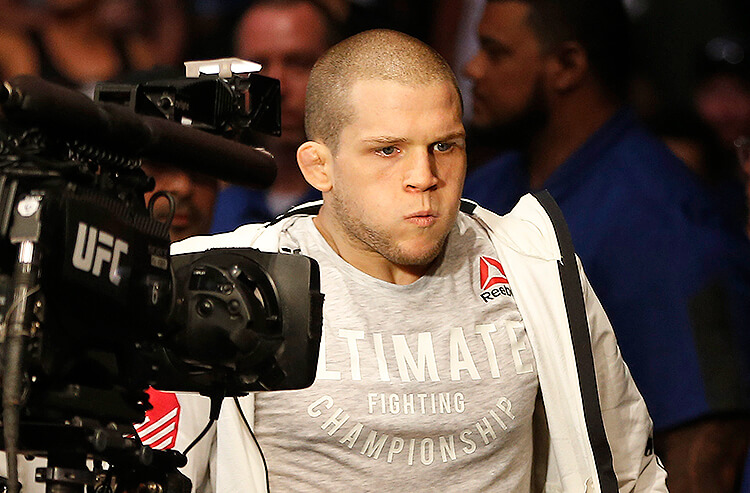 UFC 282 Morono vs Ponzinibbio Picks and Predictions: Morono Comes in at a Disadvantage
Provided by