Ilia Topiura and Bryce Mitchell are set to square off in a battle of two featherweights who have both yet to lose a match in the octagon. Find out whose record will stay perfect in our Mitchell vs. Topuria betting picks.

Bryce Mitchell vs. Ilia Topuria is scheduled for three rounds in the featherweight division as a featured undercard attraction at UFC 282 from T-Mobile Arena in Las Vegas.

This clash between two undefeated featherweights will go a long way to crown the next potential star in the deep division, and only one will be left standing.

UFC odds currently have Topuria as a narrow favorite at -135. Mitchell is hot on his heels as a live +115 betting underdog.

Here are our picks and predictions for Mitchell vs. Topuria on Saturday, December 6.

Topuria has turned a lot of heads since joining the UFC, and he can really make some noise in toppling Mitchell and breaking into the featherweight Top 10. The Pride of Arkansas has been written off before, only to come out on top and get closer to a title shot. While Mitchell is arguably closer to a major fight in the division, Topuria can just as easily overtake him in the rankings with a decisive win in this fight.

The Georgian sensation has fought four times since joining the UFC in 2020 and has scored three finishes. Each time he steps into the octagon, there’s a poise and flow of offense that has many convinced he could become the next big thing in the featherweight division. We last saw Topuria step in on short notice to face Jai Herbert last March, and he nearly blasted his head clean off with a beauty of a right hand in the second round.

Topuria gets his best work done when he can grapple, but he is also a capable striker. He averages 2.87 significant strikes per minute at 48% accuracy and scores 3.15 takedowns per 15 minutes at a 46% clip, to go along with 2.6 submission attempts per 15 minutes. Topuria's average fight time comes at 7:08, and he has 11 finishes in 12 wins with a near-even split between knockouts and submissions.

With a background in BJJ and wrestling, Mitchell can do a lot of damage on the ground and is creative with his submissions, including a rare twister he locked in on Matt Sayles in 2019. Recently, he’s beaten veterans Edson Barboza and Andre Fili to establish his presence as a top featherweight.

An excellent defender and dangerous grappler, Mitchell is a relentless grinder who can be a nightmare on the mat. He averages 2.28 significant strikes per minute at 63% accuracy, 3.40 takedowns per 15 minutes at a 52% rate, and 1.9 submission attempts per 15 minutes. Nine of Mitchell's 15 wins have come by submission, and he has scored 18 takedowns in his last six fights.

Though we have two grapplers facing off, Topuria is the better striker and has the better takedown defense. Fighters normally won’t shoot in on Mitchell, but he only stuffs 33% of his takedowns and doesn’t have considerable striking power if he can’t take the fight to the ground. Because these two are both so good at getting fighters to the mat, it’s no surprise this is a toss-up, with Topuria’s striking being the only measurable difference.

Mitchell vs Topuria tale of the tape

The striking advantage might be all Topuria needs. If Mitchell can’t break Topuria’s takedown defense, he’s outgunned up top and isn’t strong enough to deliver the type of power shots to swing momentum back in his favor. Of course, this could get interesting if Mitchell uses his small height and reach advantages to force Topuria down, but these two are likely to cancel each other out when it comes to fighting on the ground.

One thing about Topuria is that he is an aggressive finisher. Should he get Mitchell in any trouble, he can work off that momentum to dish out some serious damage and put Mitchell in jeopardy of a stoppage. As good as Mitchell has looked, his grappling might not look as solid against someone with solid takedown defense.

The fight is as close as the odds make it out to be, but Topuria has the slight edge in power, and that’s enough to pick him to win this one.

Topuria’s last three wins have come by stoppage. That doesn’t bode well for Mitchell, who really won’t have much of a choice but to go for takedowns and eat shots for his troubles. There is the chance they hit the mat, but it’ll probably be Mitchell going down from a flurry of strikes.

These two should spend some time in the first round trying to test the other’s ability in grappling, but by the second, Topuria is going to let his hands go and catch Mitchell with a savage shot. We’re rolling with Topuria to score a second round stoppage at +900. 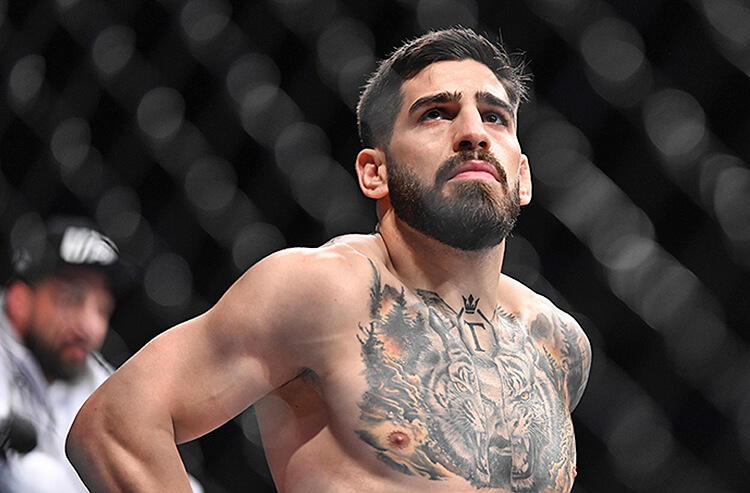