UFC 279 certainly has an interesting main event when the veteran fighter Nate Diaz will face off against the undefeated Khamzat Chimaev. Our UFC betting picks and predictions see "Borz" making quick work of Diaz to continue his win streak. 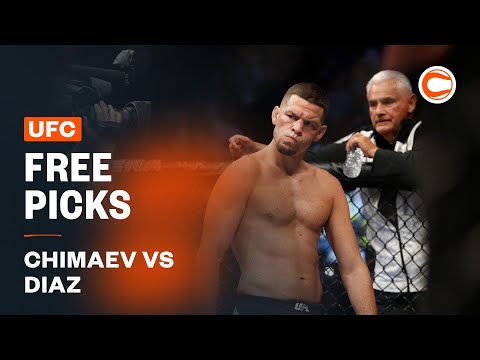 (Editors Note: Preview was published before fight was cancelled).

Khamzat Chimaev vs. Nate Diaz is the main event for UFC 279 on September 10 from the T-Mobile Arena in Las Vegas, Nevada.

This is some strange matchmaking, with a legend well past his prime in Diaz taking on one of the most dangerous young fighters in the world in Chimaev. The UFC odds reflect that disparity with UFC betting lines opening with Chimaev as a massive -1,000 favorite and Diaz coming back at +600.

With the odds so lopsided we find you the best betting angle for this fight with our best free UFC 279: Chimaev vs. Diaz picks and predictions.

Khamzat "Borz" Chimaev has surged up to No. 3 in the welterweight rankings after defeating Gilbert Burns by unanimous decision in one of the most thrilling fights of the year in April.

That back-and-forth battle against the former No. 2 contender in Burns was the first real test of Chimaev's career after he finished his first four UFC opponents with ease by landing a total of 112 significant strikes and absorbing just one.

Chimaev is a perfect 11-0 in his MMA career, and has racked up five wins and five Performance of the Night or Fight of Night bonuses since joining the UFC. Also competing at middleweight, the 28-year-old has incredible strength for this division and is an elite wrestler with heavy hands and brutal ground-and-pound.

Diaz is an MMA legend who has been competing in the UFC since 2007 and holds the promotion record for post-fight award bonuses with 15.

However, the 37-year-old is clearly well past his prime and has only fought once since the start of 2020, a lopsided decision loss to Leon Edwards last summer.

With a second-degree black belt in BJJ, Diaz is an excellent grappler with 11 career wins by submission. But he is more famous for his durability, cardio, and ability to wage an all-out war with his volume striking.

Chimaev vs Diaz tale of the tape

As a massive favorite at anywhere between -1,000 and -1,250, it's not exactly a surprise to say that Chimaev should easily win. These odds are still a bit out of whack when you consider that Chimaev was clearly overrated as -500 chalk against Burns. Meanwhile, Diaz was a tad underrated at +410 against Edwards and managed to go the distance against the current champ — and even took the fifth round.

Still, this is a bad matchup for plenty of reasons beyond the opposite career trajectories of both fighters. Even in his prime (which was a long time ago), Diaz had weak takedown defense and could get outmuscled by bigger fighters. Chimaev is a monster at welterweight and his offensive wrestling and top control are some of the best in the business.

Expect "Borz" to send Diaz out on his shield in what will likely be the last UFC fight of his career.

Diaz is as tough as they come and has been finished just twice in 26 UFC fights (once by doctor stoppage after 15 minutes). That said, he has taken a ton of damage in his career and it doesn't take many strikes for that scar tissue to rip open.

Sure he managed to go the distance in his last fight, but let's be honest, Edwards isn't exactly known for his power regardless of his recent KO win against Kamaru Usman.

On the other hand, Chimaev is brutally strong with plenty of power in his hands, and once he takes down foes, he doesn't give them any room to defensively grapple.

I expect "Borz" to quickly take down Diaz and then pound on him until the ref waves off the fight.