UFC 274 Namajunas vs Esparza Picks and Predictions: Cookie Monster Too Tough to Crack

The UFC strawweight title is on the line at UFC 274, as "Thug" Rose Namajunas defends her belt against Carla "The Cookie Monster" Esparza. The challenger is on a five-fight winning streak and our picks like the UFC betting underdog to surprise. 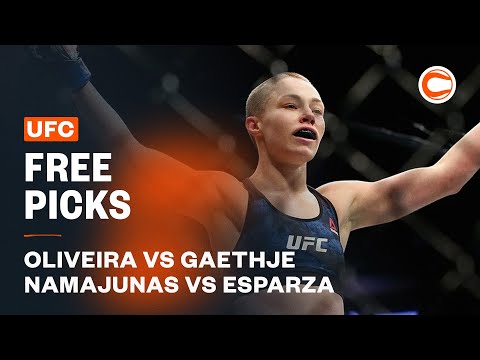 Rose Namajunas vs. Carla Esparza 2 is on the main card for UFC 274 betting on May 7.

Namajunas will be putting her strawweight championship on the line as she looks to even the score after losing the inaugural 115-pound title to Esparza eight years ago. UFC odds suggest a different result in the rematch with UFC betting lines opening with Thug Rose as a -170 favorite before shifting to -210, with the challenger Esparza coming back at +175.

Here are our best free Namajunas vs. Esparza 2 picks and predictions for Saturday, May 7 from the Footprint Center in Phoenix, Arizona.

Odds courtesy of FanDuel Sportsbook on May 4, 2022.

A) Carla Esparza and Justin Gaethje both to win BOOSTED to +600 at Caesars! Claim Now

"Thug" Rose Namajunas is fresh off a split decision victory against Zhang Weili in November. That was the first successful title defense for Namajunas who claimed the belt for the second time after knocking out Weili in the first round last April.

Namajunas is now 6-1 in her last seven fights, with her only loss during that span coming to Jessica Andrade in her first title defense back in 2019 when she was slammed on her head and knocked unconscious.

The 29-year-old is a very well-rounded fighter that combines dynamic submissions with excellent footwork and crisp boxing ability.

Carla "The Cookie Monster" Esparza is on a five-fight winning streak, most recently defeating Yan Xiaonan by TKO in the second round last April. That earned a Performance of the Night bonus for Esparza who had three takedowns, more than seven minutes of control time, and battered Xiaonan in the mounted crucifix position before the referee called a stop to the fight.

The Cookie Monster won the inaugural UFC women's strawweight championship in 2014 when she dominated a young Namajunas with wrestling and submitted her in the third round.

With a background as an NAIA All-American wrestler and a brown belt in BJJ, the 34-year-old prefers to take things to the mat where she can rely on her wrestling and top pressure to grind out wins.

Namajunas vs Esparza tale of the tape

A lot has changed since Namajunas first faced off against Esparza as a 22-year-old but her defensive wrestling ability is still suspect. Thug Rose has made strides in her kickboxing while her jiu-jitsu makes her dangerous off her back, but she was taken down five times by Esparza in their first matchup and was also taken down five times in her previous fight against Weili.

Esparza is a bit one-dimensional as a wrestling specialist but she has shown improvement as a striker. While she has often been criticized for a lack of action on the mat, she proved against Xiaonan that she is more than capable of unleashing brutal ground-and-pound.

Namajunas should have the edge standing up but Esparza's wrestling and control will make this messy and could win her some rounds. Interestingly enough, this will be the fifth high-profile rematch of Namjunas' career and all of the other four went the distance.

Esparza has been caught by a striker before (getting knocked out by Joanna Jedrzejczyk in 2015) but for the most part, she is able to drag fights the distance with decisions making up nine of her last 11 bouts. Her most recent loss came against the only fighter in the division who can outwrestle her in Tatiana Suarez (who finished her on the ground) and she has racked up plenty of wins versus superior strikers.

Styles make fights and Esparza's wrestling-heavy approach could be tough for Namajunas to overcome.

This fight should be closer than the odds suggest, which is why we like Esparza in this spot. The odds seemed more accurate when they first hit the board but with public money coming in on the popular "Thug" Rose, the live dog is the play here. 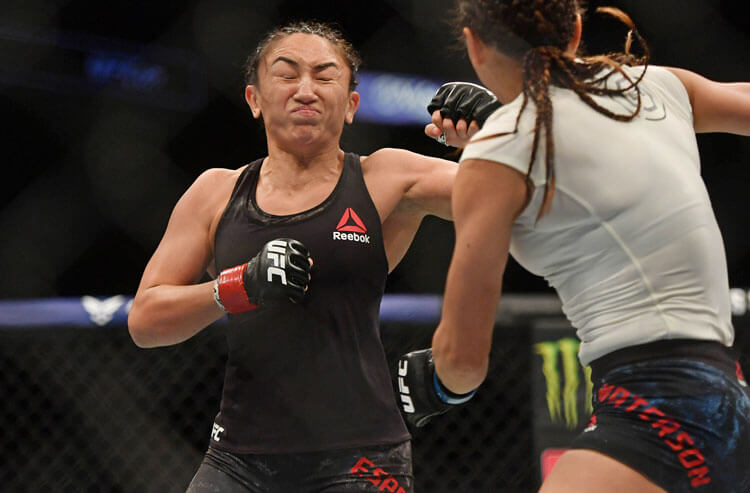 UFC 274 Namajunas vs Esparza Picks and Predictions: Cookie Monster Too Tough to Crack
Provided by