Wolves' defense has been stout, but their scoring has lacked, which is especially harmful against Erling Haaland and Man City. See why — and how — we're backing City to an easy victory with our EPL picks for Saturday's matchup.

Last week the Premier League was postponed at the last minute due to the passing of Queen Elizabeth II, but this weekend it’s back, even though some fixtures have been postponed due to policing issues around the funeral.

Saturday’s early kickoff sees Wolves welcoming Man City to Molineaux and it’s going to give us a great chance to see just how effective this Man City attack really is.

Bruno Lage has built a strange team at Wolves — they’re not the most fashionable and, in truth, they’re not always the most watchable, but they are very effective. Lage sets out his team in a 4-3-3 formation, which has evolved from last season, and they are very tough to beat.

Wolves entered this weekend 14th in the Premier League, eight points behind Man City, however nobody has conceded fewer goals than Wolves, as they’ve allowed just four in six games. The flip side of that is that they have also scored fewer goals than everybody else, just three — an average of one every two games.

Defense has really been key to Wolves’ performances and Englishman Max Kilman has been integral to that. The 25-year-old had a unique route to the Premier League having played at non-league level and also representing England at futsal. Kilman and Nathan Collins will be playing at the heart of the Wolves backline and tasked with stopped the formidable Erling Haaland.

Unless you’re reading these picks from Mars then you probably don’t need to be told about Haaland, but it really can’t be overstated how impressive his start to life in the Premier League has been. The Norwegian, often described as a robotic Viking, has been mechanical in his goalscoring, using his unique blend of speed, strength and finishing to score 10 goals in six Premier League games, adding another three in Europe too.

With Wolves setting up to keep City out, this will be a rear-guard action from the hosts who’ll put men behind the ball and look to frustrate Pep Guardiola’s team. City will need their attack to find through balls and intricate passes to bypass the Wolves backline. While Haaland is the main man, it’ll be the imagination of Phil Foden, Kevin De Bruyne, and Bernardo Silva that’ll win City this game.

This Man City team have the hallmarks of great champions: they don’t know when they’re beaten and that resolve will come in handy against the defensive strength of Wolves. City will win this but the -300 odds aren’t worth backing, instead, we’ll bet on City to win to nil, a great price at +120 given that Wolves have the worst goalscoring record in the Premier League.

As mentioned this should be an easy win for Man City with Wolves unlikely to put up much of a threat in front of City’s goal. The injury to striker Sasa Kalajdzic robbed Wolves of their new signing and their man goal threat, bad news for a team who are struggling to find the back of the net.

The club went out and signed free agent Diego Costa, with the former Chelsea and Atletico Madrid striker a welcome addition to the Premier League. The truth is that the best days of Costa are behind him and it’s unlikely we’ll see much, if anything, of the Spanish striker this weekend. He hasn’t played a competitive match in nine months which means it would be a risk to play him here. That means we should see Raul Jimenez lead the line with Pedro Neto and Goncalo Guedes either side. The all-Portuguese midfield three of Joao Moutinho, Ruben Neves and Matheus Nunes rights itself, but it’ll be a tough game for them up against City who’ll likely lineup with De Bruyne, Ilkay Gundogan and Rodri.

The main question marks for City are based around whether we’ll see Aymeric Laporte and Kyle Walker play, in addition to Jack Grealish who has just returned from injury. This is the sort of game that could suit Grealish if he were to be fit, so it wouldn’t be a shock to see him play a part here.

City should win this but the odds of -300 aren’t worth betting.

The sportsbooks are expecting goals, and who can blame them given Man City’s recent performances, but I’m not sure there’s great value on Over 2.5 goals which is -175. Given that this Wolves team have been so strong defensively, you’d think that the +137 on the Under is offering slightly more value.

That said, with Haaland in incredible goalscoring form there’s every chance that he could have another strong day. I’d probably avoid betting on this market, especially when you can get +120 on our best bet of City to win to nil, which feels safer and allows for either the Over or Under to come in.

Saturday will be dry but cloudy with temperatures in the mid-50s at the time of kickoff. 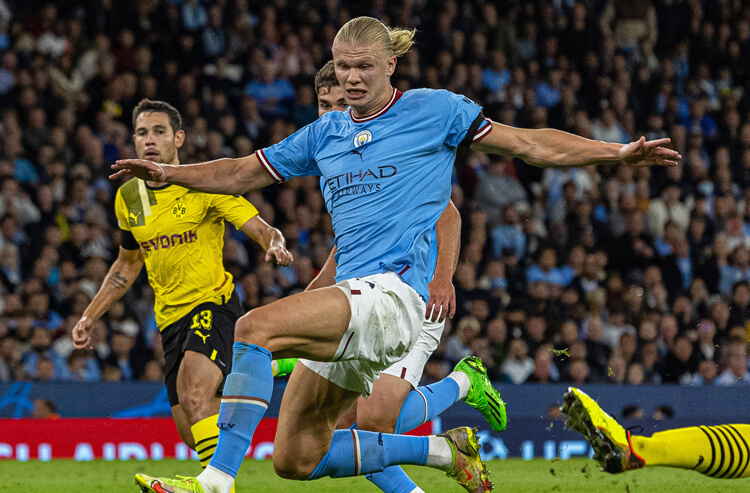