West Ham vs Wolverhampton Picks and Predictions: Wolves Can't Do Much Hunting

West Ham and Wolves have both gotten off to putrid starts this season, but injuries to the away side may prevent them from gaining any momentum. See why we're predicting an ugly, low-scoring affair with our EPL picks.

It’s not where either team expected to be seven matches into the 2022-23 campaign. Wolves are in slightly better form entering the contest, losing just one of their previous four: a 3-0 home setback to Manchester City last outing.

Meanwhile, West Ham has lost two on the bounce, both on enemy turf. Falling at Everton and Chelsea, the Hammers look forward to returning home for the first time since drawing Spurs 1-1 on Aug. 31.

Here are our EPL picks and predictions for West Ham vs. Wolves on Saturday, October 1.

The Hammers have shown glimpses of recent improvement. They won both Europa Conference League matches and sit atop Group B. While the overall inferiority of that competition dilutes the significance of consecutive wins, West Ham should still take some confidence from their unbeaten start.

David Moyes’ side has played better of late in the Premier League, too. West Ham deserved at least a point in their 1-0 loss at Goodison Park, but were yet again snake bitten.

Saïd Benrahma struck the woodwork from a brilliantly swerving long-range effort that would have leveled the encounter. That moment was a microcosm of West Ham’s start to the campaign. The Hammers lost all three opening encounters, failing to score a single goal. Moyes’ side was defeated 2-0 by Manchester City and Brighton in both opening home contests.

West Ham has scored three goals, the joint-fewest in the top flight. Only their opponents on Saturday haven’t scored more. Moyes will be the first to admit that such a paltry goal return is a sure-fire way of being dragged into the relegation dogfight.

Michail Antonio, whose lone goal of the season came against Tottenham, needs to significantly ramp up production for West Ham to climb the table. Much more is also expected from recent signing Maxwel Cornet, who is yet to get off the mark in four cameo appearances.

Moyes might grant Cornet his first start in an attempt to conjure more offense. At least West Ham’s players avoided injury and made it through the international break unscathed, a rare piece of good news for Moyes and his coaching staff.

Wolves aren’t in the same injury-free boat, with a few key personnel unavailable for Saturday’s all-important tilt. Bruno Lage’s most formidable offensive threat, Raul Jimenez, has a niggling groin problem that will prevent him from featuring.

While the Brazilian has an undisputed nose for goal, his absence of first-team action should concern Lage. Unfortunately, that’s not the end of Wolves’ personnel woes, with first-choice center back Nathan Collins suspended after being sent off against City.

Key injuries to Wolves’ primary attacking options, combined with Collins’ absence at the heart of defense spells trouble for a side that has taken a single point from three away encounters.

West Ham’s six-game winless streak at London Stadium should finally end on Saturday, though don’t expect it to be pretty. Wolves’ offensive woes will continue, but the Hammers should prevail, probably by the narrowest of margins (1-0).

West Ham vs Wolverhampton side analysis

Neither team can afford any mistakes in a meaningful clash between two sides reeling at the bottom of the table. So, expect a cagey affair, with both teams making sure they don’t concede early.

However, the impetus will be on the home side to push the tempo and dictate proceedings, as Hammers’ faithful won’t accept another listless performance. With the stakes so high, West Ham should find a way to take all three points against a resilient, well-organized defensive side.

A draw would have been in the offing if losses to key players didn’t severely impact Wolves. The pressure will intensify substantially for the losing team, with both managers’ positions at their respective clubs turning precarious.

Winning just one of their previous 14 matches dating back to last season, Wolves have failed to score in two of their first three road contests.

For all their offensive struggles, Lage’s side look good defensively. They had conceded just four goals in six matches before allowing three against City.

Even after allowing three against the Cityzens, Wolves still has the joint-fifth-best defense.

Collins is a massive loss for Wolves, who don’t have the defensive depth – especially after losing former captain Conor Coady on loan to Everton – to replace one of their most important players.

However, West Ham’s lackluster attack shouldn’t cause the undermanned Wolves bundles of issues. The Hammers have scored just one goal in three matches at London Stadium — the Premier League’s worst home goal return.

All three West Ham home matches have resulted in the Under, while two of three Wolves road contests also ended with less than three goals.

Expect much of the same from London Stadium, as these two fragile sides will do everything they can to shore up things defensively.

The temperature will be 64 Fahrenheit for the afternoon kickoff. Winds will be a moderate 12 mph, and humidity is expected to be 57%. There is a 10% chance of precipitation, and cloud cover should pervade throughout. 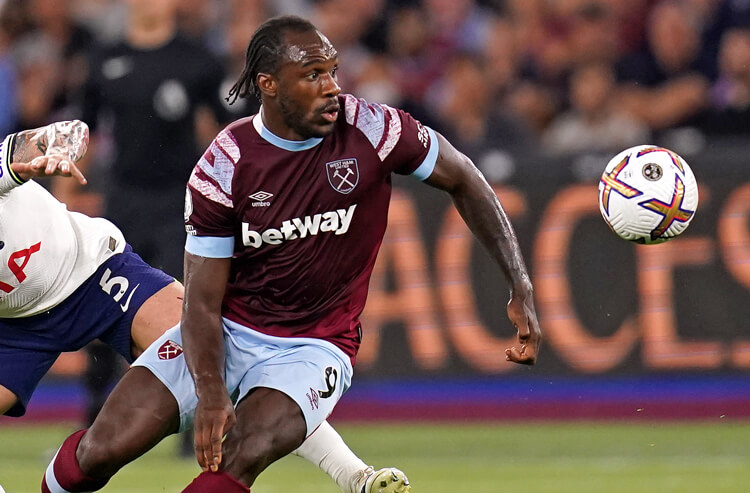 West Ham vs Wolverhampton Picks and Predictions: Wolves Can't Do Much Hunting
Provided by