It's a new chapter for Newcastle United and their home support will be as vocal as ever as Tottenham pay a visit to St. James' Park. Can Newcastle, still in search of their first win, get a result vs. Spurs? Find out in our Premier League betting picks.

One of the loudest sounds of the Premier League weekend will emanate from St. James' Park in Newcastle on Sunday, as 52,000 of the country's most faithful supporters welcome their team and a new era.

Sunday's match between Newcastle United and Spurs will mark the first game for Newcastle under new ownership, after a pointless 14-years under previous ownership. Despite all the issues on the pitch and the touchline, it will be an afternoon of hope and excitement on Tyneside.

Can Newcastle turn the momentous occasion into a badly needed result? Find out with our free Newcastle vs. Tottenham picks and predictions.

After a rainy morning on Tyneside, rain clouds will dissipate and the sun will break through, with some clouds forecast in otherwise good conditions at kickoff. Temperatures are expected around 60 degrees Fahrenheit.

For all the hoopla surrounding the takeover of Newcastle United, and what it means for the future of a once-proud club, there are still serious concerns around this season's team.

They are one of four winless teams remaining in the Premier League, with just three points from seven games. They sit second-bottom, in the thick of the early-season relegation battle. Their defensive record is shambolic and performances at the back have gotten worse with every week. And, due to the rapid fashion in which their takeover was concluded, they have a lame duck (and inept) manager remaining in place, for now, in Steve Bruce.

However, there are reasons for optimism on Sunday, too. Newcastle have been fairly consistent in attack this season, sitting mid-table in goals and expected goals, and they'll now get striker Callum Wilson back after the clinical finisher recovered from injury over the international break. Sunday will also mark the return of captain and key center-back Jamaal Lascelles, as the Magpies are nearing full health at every spot on the field, except for in goal, for the first time this season.

The healthy Newcastle team will be coming up against a Spurs team stuck in the mud, led by a manager not wanted by the club nor the fans, and a wantaway striker in Harry Kane who is in the worst form of his career for both club and country. Tottenham's undefeated start to the season is already a distant memory, as they have lost three of their previous four games in the Premier League.

While three wins in a row to begin the year has Spurs eighth in the table, underlying numbers provide a more accurate picture of their standing and underwhelming play in attack and defense. Currently 18th in xG and 12th in expected goals against, Spurs' expected goal differential (-2.8) is 15th in the league and just 1.7 above 17th place Newcastle's.

Spurs' previous two away matches have both seen them concede three goals, first in a 3-0 loss to Crystal Palace then a terrible 3-1 loss to Arsenal in the North London derby, while two of Newcastle's three points have come via home draws. Over the last four seasons, 102 of Newcastle's 178 points in the league have come at home, as even when the club existed in a toxic atmosphere and were going nowhere, the support at St. James' gave their team an advantage.

Sunday's celebratory and boisterous atmosphere will do the same, as Newcastle United mark the start of a new era with a point.

Throughout the week, as Newcastle's players have spoken to media about the ownership change and this game, they've spoken of the excitement they feel about walking onto the pitch at St. James' Park on Sunday and the wall of sound that will greet them. There will be a renewed energy at the stadium against Spurs and it will no doubt have an impact on the players.

Even during the worst moments, Newcastle's home support has buoyed the team and has been absolutely deafening to start games (before unrest and anti-ownership and management chants began). While the Newcastle team of this season haven't had much of an identity at all, they have often been quick starters. Five of the team's eight goals this season have come in the first half of games and the last highly anticipated home game, the season-opener against West Ham, saw them go ahead five minutes in.

The moment and the team so far this season are both indicators an early goal will come on Sunday, but so too is Wilson's return. The striker is far-and-away Newcastle's best finisher and his presence has consistently helped to get the best out of talisman Allan Saint-Maximin and allowed record signing Joelinton to be played out wide, rather than through the middle, where he is most effective. Newcastle's attack will be full-go on Sunday and the home support will be with them from the start. 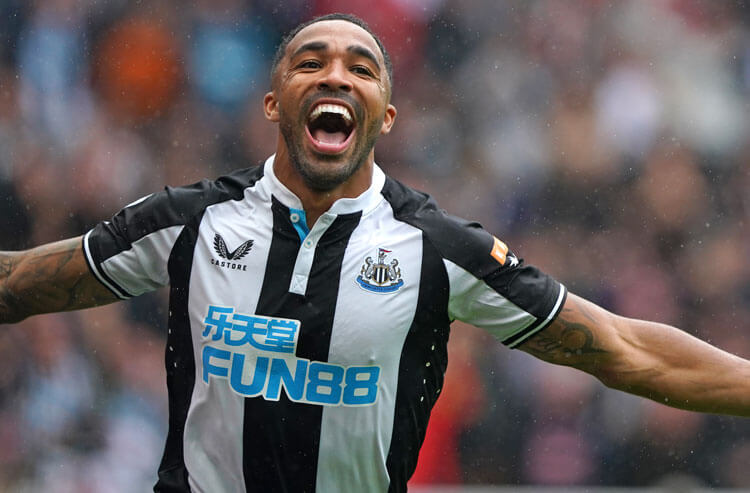