Arsenal vs Crystal Palace Picks and Predictions: Closer Than They Appear

Arsenal are a global brand and one of the Premier League's biggest clubs but have been mediocre early this season. Crystal Palace, meanwhile, have taken points off better teams than Arsenal already — can they get a result Monday? Find out with our picks.

The Premier League betting weekend comes to a close in North London, where Arsenal will host Crystal Palace.

Arsenal, who entered the weekend 11th in the table, were able to briefly dismiss their demons with a win over rival Spurs before the international break, but issues are still aplenty for the Gunners. Palace, meanwhile, have started fairly brightly for a club that entered the season with questions on the field and on the touchline.

Find out how we like this one to play out with our free Arsenal vs. Crystal Palace picks and predictions.

Showers are forecast throughout Monday in London, with 70 percent precipitation at kickoff and temperatures around 60 degrees Fahrenheit.

Arsenal's 3-1 win over Spurs to end September was massive for the Gunners, after three losses in five games to begin the year soured the mood further at a club that exists under a dark cloud. However, even that was not a great sign of things to come. They took advantage of a terribly set up Spurs team with underperforming stars, and were still outproduced in xG, 1.0 to 0.8.

The following week was further proof of Arsenal's mediocrity, as they went to the South Coast and drew with Brighton, 0-0. They were roundly outplayed and would have lost had Brighton not reverted to their old selves, creating at a high rate while holding their opponents out but unable to find a goal. In xG, Arsenal were outdone 1.4 to 0.5, the fifth time in seven matches they have been outproduced in the metric.

All told, while Arsenal entered the weekend in 11th, they were second-bottom in expected goal differential, at -5.0, below even three winless teams.

Crystal Palace have a great chance to continue their run of good results to begin Patrick Viera's time as manager. They have taken points off of Brentford, West Ham, Brighton, and Leicester City, and all four of those clubs have been better than Arsenal this season.

The 4-3-3 Viera has settled on works well, as Chelsea loanee Conor Gallagher is free to carry the ball forward from midfield with the stability of veterans James McArthur and Luka Milivojevic alongside him. Gallagher and Odsonne Edouard are two of the most equally skilled teammates talisman Wilfried Zaha has had at Palace, and certainly since Eberechi Eze suffered a long-term injury.

Arsenal's reputation seemingly precedes them but these two clubs are much closer than their respective sizes suggest. The result on Monday will show just that.

The heart of Arsenal's problems this season (besides their manager) is in defense. Aside from new signing Ben White beginning to find his footing and goalkeeper Aaron Ramsdale showing signs of being a true match-stealer, there have been no bright spots at the back. They've allowed 10 goals and 12.4 in xG, ahead of just three teams.

The Gunners have been frustrated going forward quite a bit this season, as they have been held out by their opponents four times in seven matches. However, an xG of 7.4 (compared to five goals scored) does suggest some positive regression, and striker Pierre-Emerick Aubameyang appears to be rounding into form in the new season.

Crystal Palace, meanwhile, have been surprisingly feisty after a slow start. They scored two against West Ham, three against Tottenham, and two against Leicester City, playing with more intent against bigger teams under Viera than they did under Roy Hodgson.

They are averaging over a goal a game and produce more than a goal a game in xG, and between Zaha, Gallagher, Edouard, and Jordan Ayew, they have enough going forward to create chances and punish Arsenal's poor defending.

The two clubs are nearly level in goals scored and xG, and on Monday they'll both be on the scoresheet. 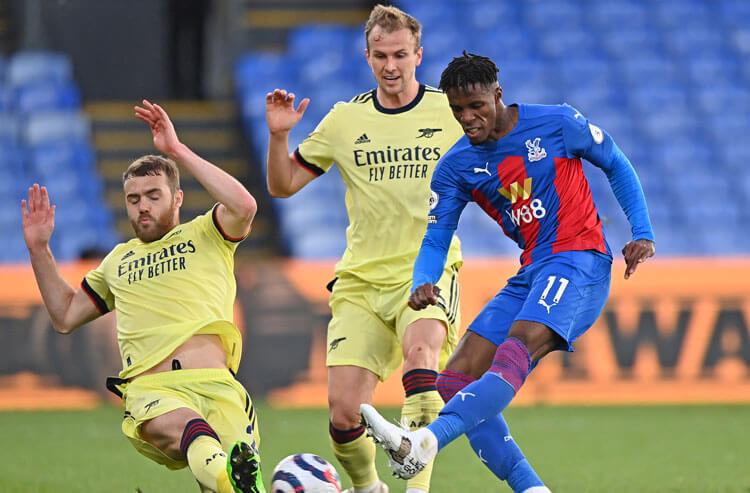 Arsenal vs Crystal Palace Picks and Predictions: Closer Than They Appear
Provided by

Tottenham vs Leeds Picks and Predictions: A New Beginning for Spurs Starts Brightly
Alistair Corp | Nov 19, 2021
About Us
Contact Us
Careers
Our Team
Brand
Testimonials