The Manchester Derby has been all City in recent years, with Pep & Co. running riot over a dysfunctional Manchester United. With the Red Devils back to respectability, our EPL picks don't expect an easy 90 minutes for Man City.

Manchester United will play host to bitter rivals Manchester City at Old Trafford to decide whether the city shall be red or blue after the latest iteration of the Manchester Derby.

Man United will look to win their 10th consecutive match across all competitions in front of home supporters, including four straight in the league. But the Citizens will be buoyed by their 6-3 thrashing of the Red Devils earlier this season, as they seek their fourth straight win over their rivals.

Can Man United continue their impressive run of form under new manager Erik ten Hag, or will the noisy neighbors pick up the win in Pep Guardiola’s 500th career league outing? Find out in our Manchester United vs. Man City picks and predictions for Saturday, January 14.

Manchester United have lost just four of their 17 Premier League matches this season, but they were outscored 15-5 in those outings. That includes a pair of defeats to start the campaign. Since those losses to Brighton and Brentford, no team has taken more points than Man United, as they’ve won 11 and drawn two in that span.

Ten Hag’s leadership has turned Man United into a team again, one that likes to press and put pressure on teams. They tried to do that against City at the Etihad in early October, and it blew up in their faces. Scott McTominay was out of position and out of his depth, as the Citizens scored four before halftime and routed United behind a pair of hat tricks from Erling Haaland and Phil Foden.

McTominay won’t be there for the Citizens to exploit on Saturday. Casemiro has become a rock at the base of Man United’s midfield, and he’s been in stellar form of late. He’s a key reason the Red Devils have won three straight in the league since the restart without conceding, and eight straight in all competitions.

Casemiro will hope to stifle a Manchester City attack that isn’t clicking of late. Since their last match before the break — a 2-1 defeat at home to Brentford — City have looked a bit vulnerable. While they’ve won four of their last seven in all competitions, they drew 1-1 at home to Everton and had to squeak out a 1-0 win at Chelsea last week.

City were due for some regression, as their 6.4 goals above expected from open play is by far the most in the league. In their 2-0 loss to Southampton mid-week in the Carabao Cup, City failed to register a single effort on target — something a Pep side hadn’t done in nearly five years.

While much of that can be attributed to squad rotation, there has been a noticeable dip in form since the World Cup in key players. Joao Cancelo was a driving force in the team earlier in the season and has now been benched in multiple matches. Phil Foden hasn’t been the same creative spark he was early in the season, and Erling Haaland’s goal output has slowed down a bit from its record-setting pace.

Ten Hag has beaten some big clubs already at Old Trafford, getting wins over Liverpool and Arsenal, but defeating City would be a true statement to the league as to his ability to lead Manchester United back to the top.

If there’s ever a time for Man United to get a result against their noisy neighbors, it’s now — when Marcus Rashford is in world-class form and City have slipped a bit. The wet conditions on Saturday could also hinder City’s passing and negate a bit of Haaland’s pace.

Take Manchester United and the Asian handicap of +0.5 goals — if your book doesn’t offer that, then take the double chance at a slightly lower price.

Manchester United comes into the match having won four straight in the Premier League, with three consecutive clean sheets. They’ve also won four straight at home, and haven’t lost there since the 2-1 defeat to Brighton at the outset of the campaign.

Pep’s 4-3-3 setup should see his primary side out there, minus Ruben Dias who is still dealing with a hamstring issue. Riyad Mahrez and Julian Alvarez are likely to flank Haaland in attack, with Foden and Jack Grealish dropping to the bench.

There is strong value with the draw and the Manchester United win, as City are favored. That said, Man United have been a terrific side at home and are high in confidence while City’s reeling a tiny bit. This could be a great spot for profit if you’re brave enough to play an outright result versus the double chance or spread.

Given their nine-goal outing in October, money has quickly come in on the Over in this match. The line is now fairly juiced and some books have switched to 3.0 to encourage more wagering.

That said, Man United have not allowed a goal at Old Trafford in Premier League play in their last five matches, including outings against Newcastle and Tottenham. Three of those matches saw two or fewer goals scored.

As for City, three of their last four Premier League away matches have seen only one goal scored. This includes 1-0 wins over Leicester and Chelsea and a 1-0 defeat at Liverpool. Only their match with Leeds went Over, with four goals scored. Only one of their last four in all competitions went Over, their 4-0 win against a depleted Chelsea side in the FA Cup at the weekend.

The last six Manchester Derbies played at Old Trafford have ended in one of two ways: either a scoreless draw or a 2-0 win for one of the two teams. Only four of the last 12 meetings overall have seen more than two goals scored. Personally, I’ll be staying away from the total, as I could see this being wide-open just as much as I can see it being a cagey low-scoring affair.

Saturday’s lunchtime kickoff will likely be a dreary one. Temperatures will feel like they’re in the low 30s, while quite a bit of rain is expected, especially in the first half. 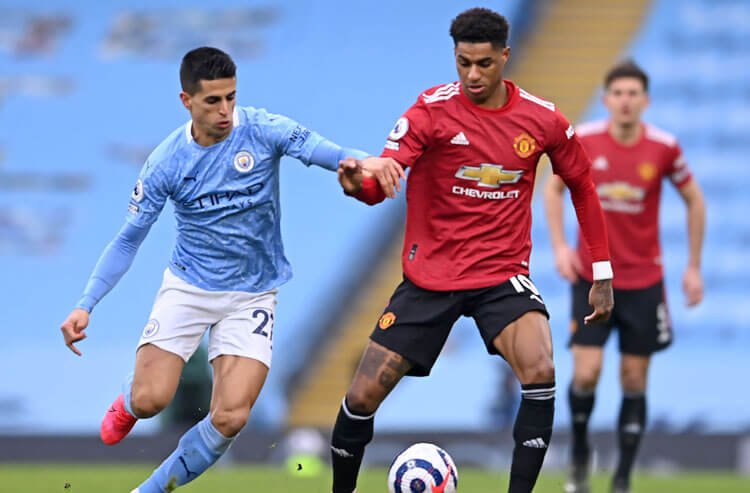