Leicester City vs Nottingham Forest Picks and Predictions: Foxes Get Swift on Monday

Leicester City are in dire need of a win, and fellow relegation fodder Nottingham Forest might be just the ticket. See why Jamie Vardy & Co. can make the right adjustments to build some momentum in our EPL picks.

To be provided a stay of execution, Brendan Rodgers must find a way for his Foxes to win their first match of the season when fellow relegation-dwellers Nottingham Forest visit King Power Stadium.

Monday’s encounter between the Premier League’s bottom two sides is replete with potential implications. It’s hard to conceive of Rodgers keeping his job if Leicester loses at home to newly-promoted Nottingham Forest.

See if he can cool his seat off a bit in our EPL picks and predictions for Leicester vs. Nottingham Forest on October 3.

It’s not just Leicester’s on-field issues that will concern supporters but also the shambolic mismanagement from the ownership group. The disarray in the ownership box has led to the Foxes being left short on the pitch, particularly in defense.

The Belgian center-back, along with the rest of his humiliated Foxes, will seek redemption against a side that has scored two goals in each of its previous two outings. Although Rodgers’ job hangs in the balance, it appears he still has his players’ trust, a vital variable for any potential resurgence.

Leicester has allowed 22 goals, the most of any Premier League team in the first seven matches of a season. While that outrageously high number makes for gross reading no matter how you perceive it, half of those goals were conceded in the previous two away matches.

At home, Leicester has conceded seven goals in three winless outings. While those numbers still don’t instill an abundance of confidence, they’re decisively better than Leicester’s away games, in which they’ve conceded 17 in four.

Through the first seven matches, Rodgers has employed a 4-1-4-1 formation on four occasions. However, don’t be surprised if you see an altered setup for Monday’s encounter. Too much space exists between the defensive central midfielder and the quartet supporting the No. 9 in the aforementioned formation. Short triangle passing becomes nearly impossible, putting too much pressure on the defensive midfielder, leaving vast gaps for the opposition to exploit.

Rodgers should make the necessary alterations, ensuring the Foxes are better equipped to dominate possession and nullify the counterattack.

Nottingham Forest enters the contest on the back of consecutive two-goal outputs. Both home tests ended in 3-2 losses against Fulham and Bournemouth, devastating results versus fellow promoted sides.

Forest mustered just two goals in the other five outings and was shut out three times. So, look for Leicester to kill two birds with one stone, finally getting in the win column while keeping their first clean sheet.

A) James Maddison 2+ shots on target and Brennan Johnson to get a shot on target BOOSTED to +550 at Betway! Bet Now

B) Leicester to win and Jamie Vardy to score a goal BOOSTED to +190 at BetRivers! Bet Now

After taking four points from their first three Premier League matches, Nottingham Forest has lost four on the bounce. Those four defeats saw Forest outscored 14-4, though Manchester City is responsible for six of those goals.

While there’s no shame in receiving a hiding from Pep Guardiola’s side, Cooper’s men also failed to shore things up defensively against Fulham and Bournemouth.

That should concern Cooper, whose side has shown a discernible inability to score and defend capably on either side of the opening seven games. Even more worrying, Nottingham Forest has been outscored 9-1 in three away encounters.

Even though both teams have recently been involved in high-scoring affairs, don’t expect that trend to persist on Monday.

Forest’s last three matches resulted in the Over, but the previous four saw less than three goals.

Thanks to their obscenely vulnerable defense, most of Leicester’s matches lately have been goal-fests. Six of their seven games resulted in the Over, with the lone Under a 1-0 home defeat to Manchester United.

However, scraps between relegation-embattled sides rarely see an outpouring of goals. And Leicester cannot afford another shocking defensive display, especially against a side that has celebrated just once in three matches on enemy terrain.

The temperature will be a cool 61 Fahrenheit for the evening kickoff. Winds will be 8 mph, and humidity is expected to be exceedingly high, at 88%. Currently, there is a 10% chance of precipitation. 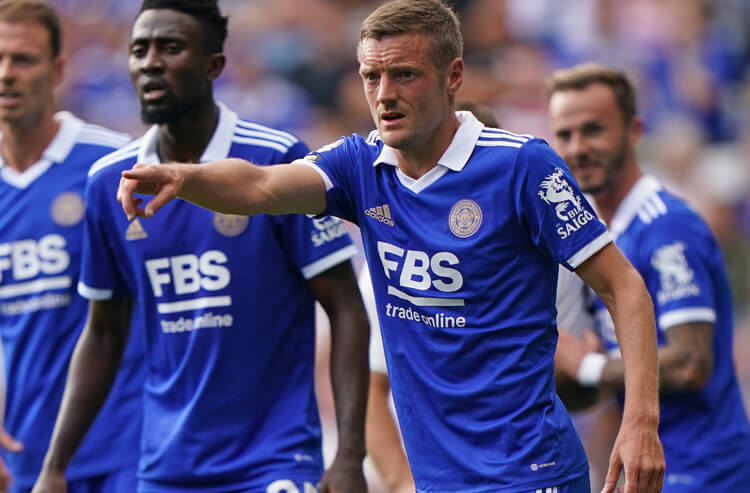 Leicester City vs Nottingham Forest Picks and Predictions: Foxes Get Swift on Monday
Provided by