Chelsea have been one of the EPL's most disappointing squads, and with Fulham also depleted, neither side will be primed to do much scoring when they meet Thursday. See why our EPL picks are predicting a low-scoring clash.

On Thursday, we see Fulham face Chelsea at Craven Cottage in a West London derby which could have big implications. Chelsea’s Graham Potter is already under pressure, and failure to get a result at Fulham could make that pressure even harder to bare.

Will Potter get the win? Or can Fulham cause another big upset? Don’t miss our Fulham vs. Chelsea EPL picks and predictions for January 12.

Fulham vs Chelsea picks and predictions

It’s always a great day when you get bonus Premier League action, and this Thursday, we have an extra EPL game to enjoy, as Fulham welcome Chelsea to Craven Cottage. Thursday’s game will go some way to finding out whether West London is white or blue, with Fulham and Chelsea’s stadiums just 1.4 miles from each other.

This isn’t one of England’s fiercest derbies, but when two clubs this close meet, there’s always an added atmosphere, and the right to call yourself the best team in the West of England’s capital is there to be grabbed.

For Chelsea’s manager Graham Potter, he won’t care at all about being the best team in West London — the only thing concerning him right now is survival. Potter arrived with much fanfare from Brighton, where he’d done a brilliant job in the past few years, but 18 games into his Chelsea career and there are already a lot of fans calling for him to be sacked.

We’ve seen from Todd Boehly’s tenure at the Dodgers that he isn’t one to make rash coaching decisions, and he’s right to avoid sacking Potter at this point — even if some of the fanbase are calling for it. Potter’s eight wins in 18 games isn’t good enough for a club like Chelsea, but he didn’t have a preseason to work with his team.

The current January window is also his first opportunity to sign the type of players for his style, with Chelsea’s squad currently a mixture of different buys from different coaches. Finally, there’s the injury issues Chelsea have had. There are 10 players missing for this game who might ordinarily be starting or on the bench, something no manager can deal well with.

This speculation over Potter’s future helps us as bettors though. Chelsea haven’t been good lately and look nervous when they take the field. They’ll come into this game looking to win, but they’ll also be mindful that they can’t take risks defensively. They’ve only scored in two of four games since the World Cup and there’s a chance that they may struggle again here, especially with so many forward players missing.

Then there’s Fulham, who are without their talisman Aleksandar Mitrovic, missing through suspension. That limits the chances of the home team scoring. Given that neither team is at optimal when it comes to scoring goals, I’d really recommend backing No on Both Teams To Score at +125, with this game likely to be a low-scoring game, regardless of result.

Fulham vs Chelsea side analysis

This is a really tough matchup to call. Given Chelsea’s issues, I would have backed Fulham to pull off a shock win if they had Mitrovic but the Serbian is a huge loss. It’ll be Vinicius taking his place at the top of the 4-2-3-1. Behind him will be former Chelsea player Willian, Andreas Pereira and Bobby Cordova-Reid, with the hard-working Joao Palhinha and Harrison Reed breaking up play behind them. The pace of Fulham’s fullbacks, Antonee Robinson and Kenny Tete, will be key when defending against Chelsea’s wide players.

The Chelsea lineup is hard to predict but we do know that they’re missing a huge amount of players. With Pierre-Emerick Aubameyang still carrying a knock and rumors of a new signing, we will probably see Kai Havertz play down the middle of the team’s forward line in their 4-3-3.

The midfield will likely see Jorginho, Kovacic, and Zakaria all together, with Zakaria having looked good in the team’s last Premier League game, a 1-0 loss to Man City. At the back, it’ll be

Thiago Silva and Kalidou Koulibaly in the heart of defense. Silva is still as good as he’s ever been, but Koulibaly hasn’t yet really gotten to grips with the Premier League and has looked a bit of a liability at times. It’s easier to get at Chelsea than it has been in previous years but without Mitrovic, it’s hard to imagine them causing much damage. For that reason, I’d lean towards this either being a 0-0 draw or a narrow Chelsea win.

The total goals line is pretty even, with this being a game that could easily fall either way if you believe the bookies. Certainly, if you look at trends, you’d probably back the Over. Chelsea’s games haven’t been that high-scoring this season but Fulham’s definitely have.

When you dig a little deeper, I’d argue it makes sense to go the other way and back this to be low-scoring. The home side, as mentioned, are without Mitrovic. Fulham’s number nine has scored 11 of the team’s 30 goals this season and is a crucial part of how they set up, bringing other people into play.

Chelsea, too, are missing some key players and again, Potter is having to make a starting lineup that doesn’t really suit his system and feels more like a collection of individuals. If you’ve watched their recent performances, it’s hard to see this group of players scoring a lot of goals. For those reasons, I’d lean towards backing the Under here.

It’ll be wet all day, but that should have subsided by the time of kickoff when temperatures will be in the low-50s. 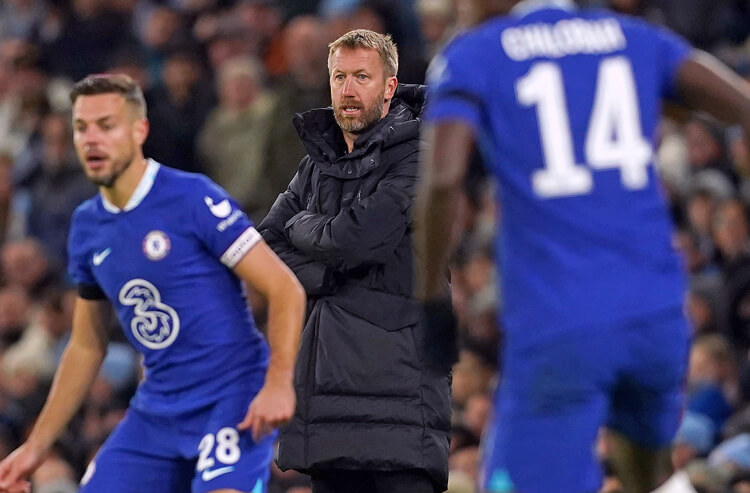 Fulham vs Chelsea Picks and Predictions: Fade Scoring From Tentative Squads
Provided by