Sweden vs Ukraine Euro 2020 Tips and Predictions: Just Enough for the Swedes

Sweden unapologetically ground out results to win their group and can advance to the quarterfinals by following that formula against Ukraine. Can Ukraine find a way through a tough Swedish side? Check out our tips and predictions.

The Round of 16 at Euro 2020 will come to an end on Tuesday, with Group E victors Sweden taking on Ukraine, who placed third in Group C.

Sweden are favored in this tie at +125, while Ukraine are +230 underdogs. Who will move onto the quarterfinals? Read on for our Sweden vs. Ukraine tips and predictions.

PointsBet USA opened this knockout match at Sweden +135/Ukraine +220/Draw +205, and the three-way moneyline has moved a bit toward the underdog. As of 12:45 p.m. ET on match day, it's Sweden +145/Ukraine +200/Draw +210, although the Swedes are attracting 75 percent of bets and 88 percent of money. Ukraine is taking 9 percent of tickets and money, while Draw is seeing 16 percent of bets/3 percent of money. The total is at 2.5 (Under -165), with ticket count dead even and the Over getting 65 percent of money. However: "Over 1.5 (-250) is taking significantly more bets/handle than any other totals bets," PointsBet's Wyatt Yearout said.

Sweden and Ukraine will have a clear, calm day in Glasgow for the Round of 16 matchup, with temperatures expected around 70 degrees Fahrenheit at kickoff.

After delivering a Swedish masterclass in their group stage opener, giving Spain 85 percent possession in a 0-0 draw they nearly stole, Sweden was up-and-down in a group they ended up topping. Against a very poor Slovakia side, Sweden cruised past them with ease in a 1-0 win.

However, their final group stage game against Poland was not without drama and really, Sweden got away with a stolen 3-2 victory. Poland out-played and out-created their opponents, with higher expected goals and a shocking miss from the best striker in the world, but it was Sweden who got the result, as they are so good at in tournament play.

Similarly, Ukraine went toe-to-toe in a hard-fought 3-2 loss against the Netherlands in their group stage opener, before cruising past North Macedonia then sleep-walking to a 1-0 loss to Austria. Despite a mediocre group stage on balance, Ukraine benefitted from the additional knockout places for third-place teams.

However, their trip to the knockout stage will be short-lived. While Sweden have remained defensively strong, the addition of Alexander Isak has given them a new dynamic going forward, as it gives talisman Emil Forsberg a player of similar technique and intelligence in attack to play off of. Sweden created at least 1.0 xG in every match of the group stage, while Ukraine allowed an xG of at least 1.4 in every match and only created more than 0.6 against North Macedonia.

Sweden moves onto the quarterfinals at two straight major tournaments.

A matchup between Ukraine and Sweden may not promise thrills, but one side of the field will be well worth watching. On Sweden's left is Emil Forsberg, their main creative force and scorer of three of his team's four goals at Euro 2020. Heading the other way, on Ukraine's right, is Andriy Yarmolenko, who has scored half his country's goals at the tournament and is always looking to cut inside onto his left.

However, while both sides have dynamic attackers, don't expect either to shine particularly bright in the Round of 16. Even against inferior opponents, Sweden is content to give their opponents possession and, as a result, Forsberg is very much a right-sided midfielder with defensive duties.

Ukraine will have the majority of the ball, but throughout the tournament, they've struggled to break teams down. Despite playing attacking soccer with a few creative players in the side, too often their attacks came to nothing — even against a lowly North Macedonia side.

In what will surely be a frustrating game for them, Ukraine will not be able to find a way through Sweden, with their opponents happy to grind out a result. 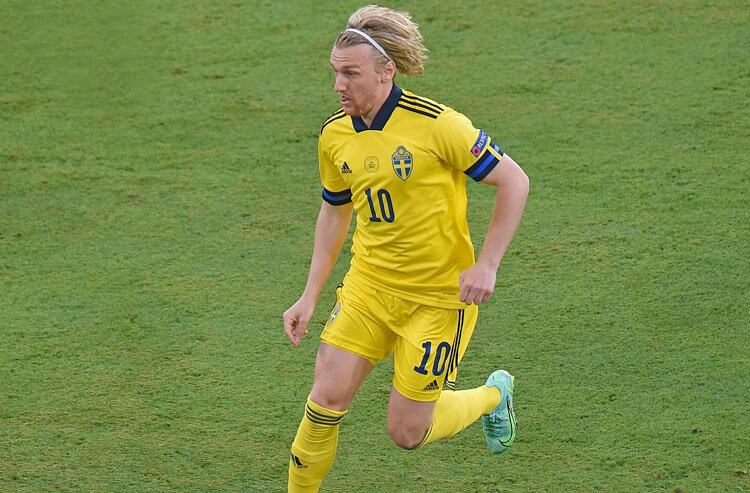 Sweden vs Ukraine Euro 2020 Tips and Predictions: Just Enough for the Swedes
Provided by