Chelsea vs Manchester City Picks and Predictions: The Champions Serve up a Reminder

Chelsea have enjoyed a string of success against Manchester City this year and currently sit on top of the Premier League, but the champions have reason to be confident heading to London. Find out how these title challengers will play out with our picks.

Fans in London will be treated to an absolutely mouth-watering contest on Saturday, as Chelsea host Manchester City in a game with potential Premier League title implications.

The two sides are No. 1 and 2 on the Premier League title odds board early in the season but Chelsea's undefeated start has them on top of the league on 13 points, while City sit fifth on 10 points.

Keep reading for our free soccer betting picks and predictions and find out how we think Chelsea vs. Manchester City will play out.

After a sunny Saturday morning in London, rain clouds will roll in prior to kickoff with showers expected in the hours leading up to kickoff and throughout the match. Temperatures are expected around 70 degrees Fahrenheit.

Chelsea manager Thomas Tuchel and City manager Pep Guardiola have a long history against one another, going back to lopsided battles between Tuchel's Mainz and Guardiola's Bayern Munich during the early part of last decade. The most recent chapter, played out in England since Tuchel's appointment in early 2021, has seen Tuchel enjoy an incredibly rare string of success against Guardiola.

The two teams have played three times since Tuchel took over at Chelsea, with the Blues coming away as winners in each of the three games. Even more impressive is that two of the three games were high stakes, as Chelsea knocked City out of the FA Cup in the semifinal and later defeated them in the Champions League final. The Chelsea squad that handled City so easily over three games last season is not the bona fide title contender they are now, either, with world-class striker Romelu Lukaku among the additions made since then.

However, while Chelsea have proven themselves as genuine title contenders this season with four emphatic wins and a hard-fought 0-0 draw at Anfield, underlying numbers suggest they aren't the Prem's top dogs quite yet. Though just Manchester United have scored more goals (13) than Chelsea's 12, the Blues' attack hasn't been as lethal as their total suggests. They are tied for fifth in expected goals, at 7.6, so some regression in attack can be expected despite having two absolutely clinical finishers in attack in Lukaku and Kai Havertz.

Similarly, on the other end of the pitch, Chelsea have allowed just a single goal this year (tied lowest in the Prem) but have an expected goals against mark of 5.5, which is tied for the fifth-lowest in the Premier League.

Conversely, Manchester City's 12.2 xG this season is a touch higher than their goal total of 11, while their expected goals against of 2.7 is nearly a full goal lower than the second-lowest in the league. We've seen glimpses of the City machine that has cruised to multiple titles under Pep this year, including back-to-back 5-0 wins, but their numbers suggest they could hit cruise control yet.

Though more difficult to quantify, the presence of Pep Guardiola weighs into this pick, too. Put simply, Guardiola is as obsessive of a manager as we have ever had, and after three straight defeats at the hands of Tuchel's Chelsea, one has to imagine he has been cooking up the tactics necessary to stop their skid. A draw at Stamford Bridge is feasible but we are putting our faith in the best manager in the world and the reigning champions, as City reaffirm their status with a win over Chelsea.

Prior to the season, all of the attention on Manchester City's attack went toward 100-million-pound signing Jack Grealish and how he would fit into such a loaded squad. However, upon the start of the season, another fascinating development had occurred. Ferran Torres, an absolutely rapid winger signed a year ago from Valencia, had become the latest player played out of their natural position and instead through the middle by Guardiola.

Most famously done with Lionel Messi at Barcelona, Guardiola has tried a number of wide or midfield players through the middle in attack at City as well, whether it was as a false No. 9 or an out-and-out striker, including Raheem Sterling, Bernardo Silva, Kevin De Bruyne, and Ilkay Gundogan. Torres, however, has immediately taken to the position brilliantly and appears to be a long-term solution there, especially with winger-turned-striker Gabriel Jesus thriving back out wide at his natural position on the wing.

Torres is capable of dropping deep or drifting wide in order to help cycle the ball but with his quickness, he is at his best playing off the shoulder of a center-back, a situation in which his ability to read the play and accelerate at a breakneck pace is rewarded with through balls and great goalscoring chances.

For as good as Chelsea's defensive performances have been under Tuchel, they do have a considerable lack of pace at the back. It's the perfect situation for Torres to find himself in on goal and when that happens, he'll make no mistake. 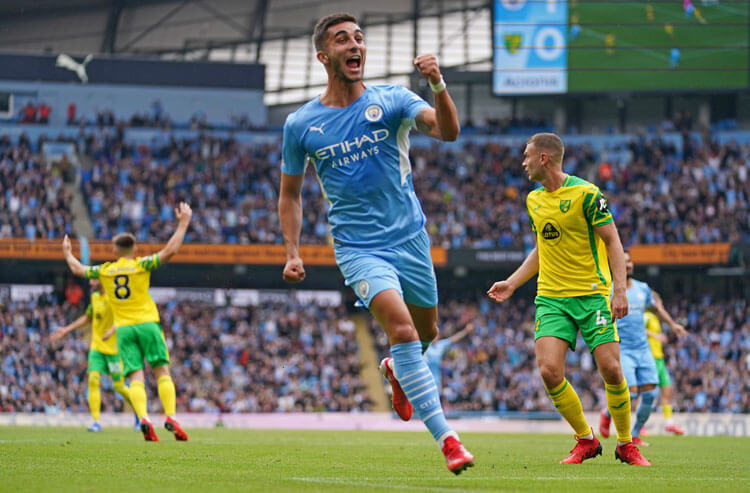 Chelsea vs Manchester City Picks and Predictions: The Champions Serve up a Reminder
Provided by

Liverpool vs Manchester City Picks and Predictions: Another Chapter in an Era-Defining Rivalry
Alistair Corp | Oct 1, 2021