It's a loaded slate in the EPL this weekend, with a London derby between Arsenal and Chelsea among the headliners. Both sides are in great form, even with Chelsea's loss last weekend — find out how we expect this one to play out in our picks.

London bragging rights are on the line as Chelsea and Arsenal collide at Stamford Bridge on Sunday, with the Gunners looking to keep up their title charge.

Mikel Arteta’s men are unbeaten in their last six Premier League games, headlined by a 5-0 masterclass against Nottingham Forest last weekend, and have taken 31 points from a possible 36 in the league this season.

For Chelsea, this is a big statement game after a shambolic 4-1 loss to Brighton last weekend — Graham Potter’s first defeat as Blues boss. A London derby should be ample motivation for the hosts, who enter the weekend 10 points behind Arsenal.

Check out our Chelsea vs. Arsenal picks and predictions for Sunday, November 6.

Chelsea vs Arsenal picks and predictions

Confidence is high in the Arsenal camp. Goals are coming from all over the pitch (who had Granit Xhaka pegged as a goalscorer?!) and last weekend’s slick passing and movement were too much for a Forest team that had beaten Liverpool last time out.

While I expect a wounded Chelsea team to be sharper and hungrier here, Arsenal are oozing class in the final third and bringing back memories of Arsene Wenger’s free-flowing sides. If the visitors can weather the early storm, there will be opportunities on the counter-attack.

Those Arsenal chances could come early too. The Gunners have been strong starters this season, scoring the first goal in 15 of their 17 games (and 14 of those came in the first half), including the 1-0 Europa League win over Zurich on Thursday.

Facing them is a Chelsea defense that looked lost against Brighton’s quality and intensity. Time and again, the Blues were out of position as their 3-4-2-1 formation came unstuck — and two own goals summed up the confusion. Their starts have generally been the opposite of Arsenal’s early success. Chelsea leaked the first goal in midweek against Dinamo Zagreb and conceded two first-half goals at Brighton.

That spells trouble with Gabriel Martinelli, Martin Odegaard, and Bukayo Saka in unstoppable form for the Gunners in the final third. This should be a tight battle, but I like Arsenal to make a fast start and bag the first goal.

Chelsea vs Arsenal side analysis

Recent form gives the edge to Arsenal but look for the Blues to raise their game against fierce rivals. Potter will have had his players’ full attention this week after the disastrous performance against Brighton — he will expect a response.

As good as the Gunners have looked in recent weeks, the hosts have the pace up front to mirror the way that Manchester United exploited space behind the Arsenal back four. Sterling, in particular, should be a threat, with Potter likely to abandon the head-scratching team selection from the weekend in which Sterling and Christian Pulisic started as wing-backs.

Losing Ben Chilwell to a hamstring injury hurts Chelsea’s depth, with Marc Cucurella likely to shift over to the left wing-back spot. This is the type of game where the hosts will especially miss the tireless N’Golo Kante as they try to match Arsenal’s intensity, but Conor Gallagher has shown a knack for well-timed runs from midfield.

Arteta had the luxury of resting key players for the midweek Europa League fixture, with Martinelli watching from the bench and Odegaard just making a late cameo. The visitor’s fresher legs could make all the difference, but don’t be surprised if both teams have to settle for a point.

The attacking talent on both teams suggests we’ll get scoring opportunities. Martinelli and Odegaard love to join the attack from deeper positions, and Arsenal should also be able to call on Saka, who came on as a sub in midweek, after his speedy recovery from a minor knee scare.

When assessing Arsenal’s recent form, keep in mind that Arteta’s men have been seeing off opponents despite a goal drought for Gabriel Jesus. The Brazilian has gone eight games without finding the net, though his work rate and link-up play remain top-class. This would be the perfect stage to find his shooting boots again.

Even in the loss to Brighton, Chelsea had chances, suggesting the Over is very much in play here. Sterling, Kai Havertz, and former Gunner Pierre-Emerick Aubameyang are proven goal threats, but Potter will be looking for more consistent service from midfield.

Arsenal won 4-2 at Stamford Bridge back in April, with two goals from Eddie Nketiah, and you have to go back to 2018 for the last 0-0 draw between these teams. The intensity of a London derby has to be factored in, of course, as does some fatigue from midweek action. It may fall short of a six-goal thriller, but both goalkeepers should be busy.

Light rain showers are expected on Sunday with a gentle breeze and temperatures in the mid-50s, both in the build-up to kickoff and during the game. 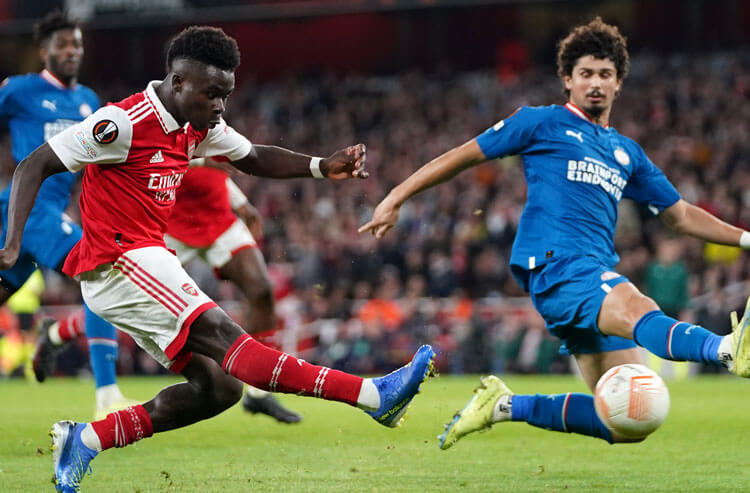