Brighton enjoyed a strong start but have since seen their goals dry up — a familiar story for the club — while Leeds are yet to get rolling in the new Premier League season. The two are trending toward a draw, as our EPL picks highlight.

Two favorites among neutrals a year ago, who have gone in opposite directions in the new Premier League season, will clash on the South Coast on Saturday as Leeds United make the trip south to face Brighton.

Leeds have been on a backslide all season and sit just one place above the relegation zone, while Brighton's excellent start has slowed recently, with the Gulls now seven games without a win.

Find out how this one will play out in Premier League betting with our Brighton vs. Leeds picks and predictions.

After a rainy morning in Brighton, there is just a 20 percent chance of precipitation at kickoff. Temperatures are forecast around 40 degrees Fahrenheit on a cloudy afternoon.

The mark of Brighton's early-season success was sudden potency in front of goal. Over the last couple of years, they had come to be known as "xG FC" for their habit of creating a high number of chances but failing to finish them with any kind of consistency.

The first five games of this season marked a change, as Brighton scored seven and outproduced their xG as they rose as high as the Top 4. The subsequent seven games have been a return to old form, however, as they have scored five while creating 7.3 expected goals.

As such, Brighton have slipped down to ninth in the table and haven't won a Premier League game in over two months. As has been the case over the last two seasons, during which they led the Prem in draws in both years, their quality keeps them in games but the lack of cutting edge leaves them in a deadlock.

While Brighton at least have a strong start to fall back on, Leeds have suffered through a slow start, as one of the last teams to pick up a win in the league, and injuries. They've missed key figures in attack, midfield, and defense, and are still without striker Patrick Bamford, as well as their two best defenders in Robin Koch and Luke Ayling.

The consistent need to juggle lineups has made Leeds poor in both directions as they've only kept one clean sheet all season, against Watford, while routinely being outproduced in xG against equal or lesser competition.

However, under Marcelo Bielsa, Leeds are too well managed to continue to be so lifeless, and they're slowly getting healthy again and showing an increase in attacking bite. A seriously depleted team at Spurs last week managed to create 1.1 xG in a 2-1 loss, and now both Raphina and Rodrigo will return.

Both teams are struggling to find a cutting edge at the moment, and fittingly they're level with five draws, the third-most in the league, while separated by two spots and 2.1 xG in expected goal differential. With little reason to believe either team will find a winner against the other, count on a sixth draw in 13 games for Leeds and Brighton.

As mentioned, Brighton's attack has left their fans wanting over the last several months. For all their quality and ability to create beautiful patterns which lead to chances, they simply don't finish with goals. And, for as long as Neal Maupay is leading the line, it's hard to imagine a major change.

Maupay has been among the most maddening strikers in Europe over the last several seasons. Among all forwards in the Top 5 European leagues, Maupay is in the 13th percentile in goals and 35th percentile in xG (penalties excluded). For as good as he is at pressing off the ball and helping in the build-up, he does not finish his chances.

Leeds, meanwhile, have suffered greatly with Bamford sidelined for the majority of the season. Not only has Bamford become a clinical finisher in recent seasons, scoring 17 times in his first full Premier League campaign a year ago, but his ability to hold the ball up and play through balls to marauding wingers is crucial to Leeds' attack.

Compared to last season, when Bamford played all 38 league games, Leeds' per game averages are down 0.63 in goals, 0.25 in xG, and 1.09 in goal-creating actions.

Both teams could find the back of net in this one but with a Brighton team back to their old selves and failing to finish chances, and Leeds without their No. 9, we have to take the Under.

Brighton's defense has been middling all season and are in a run of poor form, as they've conceded nine goals over their previous four Premier League games, including three against Newcastle and Aston Villa, two toothless attacks.

While their three-man backline provides numerical superiority through the middle, they can be had by attacks coming from out wide, especially with their wing-backs creeping forward and none of the three center-backs being particularly quick. That will be an issue against a Leeds team relying more and more on winger Raphina, who has broken into the Brazilian national team amid a great season.

The 24-year-old is off to his best start yet, with five goals and an average of 0.55 goals per 90 minutes. Raphina's efforts are all the more impressive due to Bamford's absence, as he has often been the only attacking player of any real concern to opponents. When he has been given time this season, he has punished teams with an ability to cleanly and powerfully strike the ball from anywhere across the penalty area.

Brighton's tactics will allow Raphina to receive the ball in space, and the Brazilian's talent will make Saturday's hosts regret it. 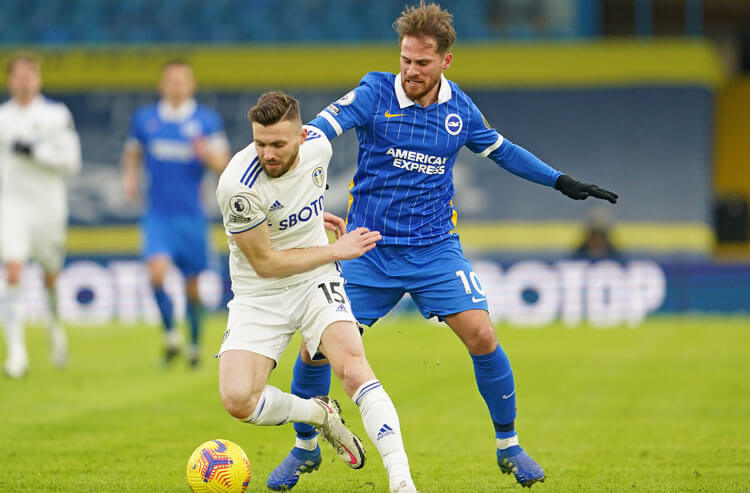 Brighton vs Chelsea Picks and Predictions: Tuchel’s Blues Bounce Back
Sam Farley | Jan 17, 2022
About Us
Contact Us
Careers
Our Team
Brand
Testimonials