Manchester United has a new manager on the touchline but it will be the same old mediocrity on the field in London Sunday, as they make the trip to face league leaders Chelsea. Find out where the Premier League betting value lies with our soccer picks.

A great weekend of Premier League games will come to a close in London on Sunday, when Michael Carrick's Manchester United make the trip to take on league leaders Chelsea.

Man United's visit to Stamford Bridge will mark the first league game since the club and former manager Ole Gunnar Solskjaer parted ways, with Carrick facing a stiff test in his interim period after a midweek win in the Champions League.

Here are our free soccer betting picks and predictions for Chelsea vs. Manchester United, with kickoff on November 28.

Clear skies and sunshine are forecast for London on Sunday, with temperatures expected to be around 40 degrees Fahrenheit on an otherwise perfect afternoon come kickoff.

Manchester United's Champions League win over Villareal during the week represented a (semi) fresh start, in that it was Carrick, not Solskjaer, at the helm. However, it was more of the same in that they were largely poor until Cristiano Ronaldo rescued them with a winner in the 78th minute. And really, that's the reality the club face at the moment: it will be more of the same, mediocre play for the foreseeable future.

The massively influential Ralf Rangnick will soon take the reins from Carrick as interim manager and in time, will certainly have his values reflected in the team's style of play, with high-pressing coming to a squad that does very little of it at the moment. However, that doesn't fix a team that currently is shambolic in defense and without cohesion going forward, and a squad that's terribly constructed and top-heavy.

Man United's collapse in Solskajaer's final game in charge last weekend, during which captain Harry Maguire was sent off and they conceded four goals to Watford, further sunk a terrible defensive record. They've allowed the third-most goals and fifth-most xG, and despite embarrassment after embarrassment this season, have saved their worst performances for the biggest games.

A 5-0 loss at home against Liverpool was followed by a 2-0 loss, also at home, to Manchester City — a derby loss in which City took pity and simply played keep away for the second half. There's absolutely no reason to think a meeting with Chelsea — this time, away from home — will result in anything different. The Blues' attack is stronger, their defense is in a different world, and the xG differential between the two, 12.5 (+9.9 vs. -2.6), perfectly represents the gulf in class.

Chelsea's defensive record is so outstanding that any game they are a part of will lean toward the Under. In 12 Premier League games so far this season, Chelsea have conceded just four goals (with an xG against of 11.9), as their backline continues to appear unbreakable and goalkeeper Edouard Mendy makes a stronger case as one of the world's best.

While Manchester United's goalscoring record is respectable this season, as they sit fifth in the league in goals and xG, it has largely come down to individual moments of brilliance rather than any clear plan of attack. The stability Chelsea's back three provides is an excellent match for a Manchester United attack that is often individualistic, and if not, incoherent. For as capable as Ronaldo is, still, at finding a goal from nowhere, Chelsea should be trusted to keep a ninth clean sheet on Sunday.

For as great as Chelsea are defensively, however, they haven't been an Under lock this year — because they are so potent in attack. They've scored three on six occasions and put seven past Norwich City, proving they can top a goal total on their own.

Though Chelsea are likely to put multiple goals past Man U, expectations of another three-goal day should be tempered. They will be without Kai Havertz and Romelu Lukaku up top, as well as second-leading scorer Ben Chilwell. With the likely front three of Mason Mount, Callum Hudson-Odoi, and Timo Werner having combined to score just five goals (including one penalty) so far this season, the attack may be more limited than in recent matches.

At this point, nearly a year on from Thomas Tuchel's appointment as Chelsea manager, the Blues' place as a world-class elite squad is unassailable. We've seen that proven in Europe and domestically for 10 months straight, with very few bumps along the way.

Besides Chelsea's meetings with fellow title contenders Liverpool and Manchester City this year, Chelsea have rarely been challenged by anyone in the Premier League. Of their nine wins in the league so far, eight have come by multiple goals, as the Blues' combination of fantastic defensive stability and game-breaking talent in attack has seen them devastate teams as matches progress and their opposition is forced to push higher up the pitch.

This is sure to be the case against a Manchester United team woeful in defense. Man U's season hit rock bottom in their previous league game, allowing four goals to Watford, to drag their defensive record to 18th in goals allowed and 16th in expected goals allowed. They'll be without first-choice center-backs Harry Maguire and Raphael Varane, and as always will be defending a man down with Ronaldo utterly helpless out of possession.

Chelsea are sure to win by multiple goals and Manchester United are lucky their opponents are shorthanded in attack, as otherwise, they would be facing another complete embarrassment. 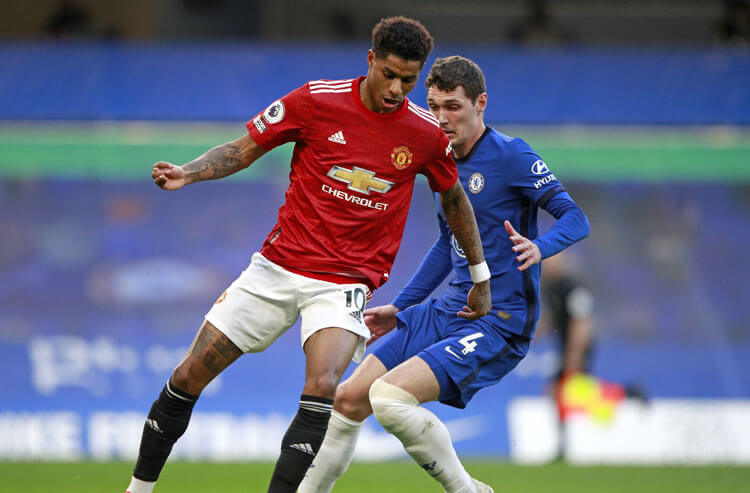 Manchester City vs Chelsea Picks and Predictions: Chelsea Foiled by Sterling & Co. in Must-Win
Sam Farley | Jan 13, 2022
About Us
Contact Us
Careers
Our Team
Brand
Testimonials