The Gulls are favored for this latest chapter in the M23 rivalry, but the value might lie in the underdogs at a generous price. Find out why as we preview the matchup with our Brighton vs Crystal Palace picks.

Friday sees the first meeting of 2022 between Brighton and Crystal Palace. Despite 50 miles between them, it’s one of the English soccer’s most unique rivalries. This season, both teams have performed above expectation and are arguably two of the most exciting teams to watch in the league.

With both sides now known for their attractive style of play, we could be set for one of the most enjoyable derbies in recent years between these two teams. Don’t miss our Brighton vs. Crystal Palace tips and predictions.

The game will kick off on the South Coast at 8pm local time, but we’ll fortunately only see mild wind. The temperature will be in the lower 30s but at least it’ll be dry with no rain expected at all on Friday.

The rivalry between Brighton and Crystal Palace is as curious as it is strong. Despite being roughly 50 miles apart, an unusually huge distance for any rivalry in English soccer, there is real bitterness between both clubs and sets of fans in what is known as the ‘M23 derby’, with both teams situated at the end of the M23 motorway.

It dates back to 1976-77, in which Brighton and Crystal Palace met five times in one season, with an FA Cup match being the spark that ignited the fire. A disallowed goal and a controversial decision to retake a penalty that was subsequently missed resulted in a rivalry that is still burning nearly half a century later.

Fast forward to 2022: These teams are both exceeding expectations in the Premier League and are arguably two of the teams with the most attractive style of play in the country. Both are helmed by young and promising managers who have real ideologies about how they play. Brighton sit in ninth, three spots ahead of Crystal Palace, but just four points separate the two teams.

For Graham Potter, it’s been a fantastic few years since he took charge of Brighton. Replacing the popular Chris Hughton was never going to be an easy task, but he’s transformed this team and become one of the hottest names in management. He sets his teams up with three at the back and two fullbacks, key to his system. A dynamic midfield presses and hurries the opposition and a front two are left to score the goals.

Potter might be linked with a move to one of the big boys, but Patrick Vieira’s name has been associated with the upper echelons of the sport for years. The former France and Arsenal legend first took charge of New York City FC before a disappointing spell in Nice. When he came on at Selhurst Park this summer, there were huge doubts over his managerial ability, but so far he’s proven everybody wrong, building an attacking team that thrives with a 4-3-3 formation and has recruited some of the best young talents in the Premier League.

There’s a youthful flourish to both of these two teams, who have some of the league’s better young prospects amongst their ranks. However, both teams will be missing key players on Friday with Brighton’s Yves Bissouma and Palace’s Jordan Ayew, Cheikhou Kouyate and Wilfried Zaha all away on international duty at the African Cup of Nations. Those are big names for both teams and their losses will be heavily felt. Despite Zaha being a Crystal Palace icon, I feel it’s actually Brighton, despite only missing one player, who will be hit the most. Bissouma’s energy is felt everywhere in that midfield and the ability he has in breaking up the play and driving the ball forward will be seriously missed.

Brighton are the bookies’ favorites and it’s understandable why. They’re three points better off than Palace and have fewer players missing.  But at +300 odds, Palace are only more attractive. This is a dynamic young team, and despite the missing Zaha and Ayew, they still have real attacking power. Christian Benteke and Odsonne Edouard have the ability to score goals, but the emergence of Michael Olise, signed from Reading in the summer, has been breath-taking in recent weeks. He is a serious talent and is now taking his opportunity to become a fixture in this team. Conor Gallagher, on loan from Chelsea, is another of the young stars who have the potential to take Brighton apart. We might also see Eberechi Eze who is returning from injury.

Crystal Palace might be missing some big names, but their youthful energy and fearless style will cause Brighton problems, and at odds of 3/1, they’re a great play here.

We’ll have to take the Under here. Crystal Palace have generally been involved in high-scoring games on the road this season, but the majority of those were in the first quarter of the campaign. Four of their first five games had Over 2.5 goals, with that hitting in just two of their four games since. This Palace team has failed to score in any of its three previous league games on the road. I’m confident it’ll break that streak and score on Friday, but it should still not be overly high-scoring.

As brilliant as Brighton have been this season, you don’t go and watch a game at the Amex expecting goals. In nine games at their home ground, the Over 2.5 marker has only been broken twice. This game, like their others, should only be won by a single goal, or at most, two.

The +300 available on Crystal Palace is well worthy of being the best bet for this game. It’s a great price on an attacking and youthful team. I’d really recommend backing them at that price, but I’d also like to suggest another wager.

With this young attacking talent on display, it makes sense that Brighton’s fullbacks could be in for a tough day. They’ll likely have to face Olise, Edouard, and potentially Eze from the bench. That’s going to be tough going for anyone and Brighton youngster Tariq Lamptey looks like great value for a booking at +200.

The Chelsea youth product has only been booked once this season in the league, but he has a tendency for giving away fouls and he can be rash. His ability going forward is the key reason that he’s in this Brighton team and he can sometimes be slightly suspect at the back, relying on his pace to help him mop up any mistakes that he makes. In previous seasons, he’s been a booking waiting to happen and there’s a good chance he reverts to type against attackers as tricky as those on the Palace wings. 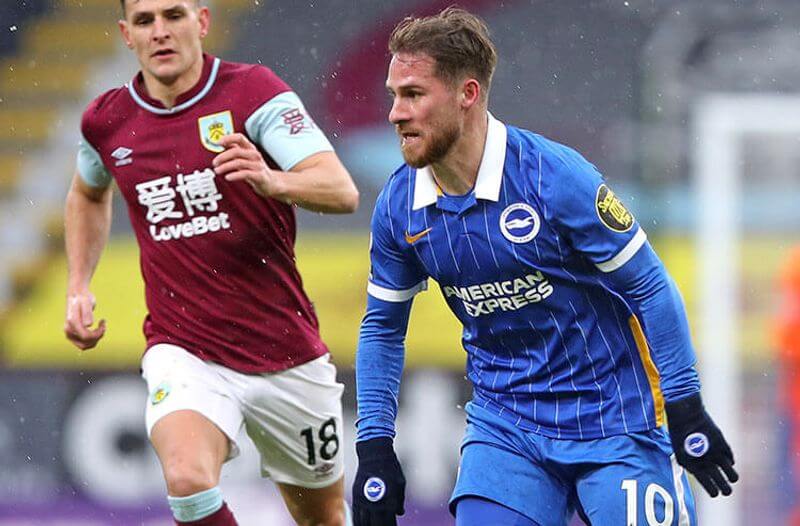