Arsenal's in great position to snare a Champs League berth, while Leeds are in danger of relegation. As two sides battle with contrasting motivations on opposite ends of the table, find out why the hosts have a huge edge in our EPL betting picks.

While both sides are at opposite ends of the table, there will be plenty of urgency from each club on Sunday when Arsenal host Leeds at the Emirates Stadium. The Gunners are in a fight for a Champions League place next season, while Leeds are in survival mode as they look to avoid going back to the Championship after just one season.

Will Leeds be able to secure a valuable result to help stave off relegation? Here are our best EPL picks and predictions for Arsenal vs Leeds on Sunday, May 8.

It will be a picture-perfect day at the Emirates on Sunday. Temperatures are expected to be in the low 60s for the entire match, with mostly sunny skies and a minimal breeze, and zero chance of rain.

It’s been a terrific month for the Gunners as they pursue a place in the Champions League for the first time since the 2016-17 campaign. They have blown past Manchester United in that time, and now enjoy a two-match lead over rivals Tottenham for fourth place. With just four matches remaining, third place is even in play, as fellow London side Chelsea sit just three points ahead.

Arsenal come into the match with consecutive victories over Manchester United, Chelsea, and West Ham, enjoying a 2-1 victory over the Hammers last weekend. They have claimed victory in nine of their last 13 Premier League matches, and their impressive season earned manager Mikel Arteta a new contract on Friday, as the club extended him through 2025.

With nine goals in their last three matches, Arsenal’s attack is rounding into form. Alexandre Lacazette has been replaced at striker by Eddie Nketiah, as he and winger Bukayo Saka have helped lead an impressive run of form. Saka’s assist against the Hammers gave him a goal involvement in each of Arsenal’s three victories on the trot.

The return of fullback Takehiro Tomiyasu was quite noticeable as well against West Ham after missing three months with injury, and his defensive prowess allows Arsenal to employ a three-man back line when in attack.

The visitors come in off the back of a 4-0 defeat to Manchester City, a result that ended a strong run of form for Jesse Marsch’s side. They had taken points from five consecutive matches, but the loss combined with wins for Burnley and Everton now have them in a precarious position as the final match weeks approach. Everton control their own destiny at this point, having a match in hand on Leeds and sitting just two points back.

The schedule after Arsenal gets no easier for Leeds, with Chelsea and Brighton both on deck next week. Scoring goals would be helpful, an achievement that has evaded them in each of the past two matches. However, they will find solace in their away form, having taken two wins and a draw in their last three on the road — with two clean sheets to boot.

Unfortunately, they will have to find a way to secure a precious result without their midfield heartbeat, as Stuart Dallas suffered a fractured femur against Manchester City and will be out at least six months. They also are still awaiting the return of striker Patrick Bamford, who has yet to return to training.

I love Arsenal to win this match, but there is no value whatsoever in the moneyline. That means the first half is your best match result play. Only Manchester City, Liverpool, and Chelsea have taken more points in the first half of matches than Arsenal this season. They have been leading in 15 of 34 matches at the break, with a +11 goal differential.

Meanwhile, Leeds have been trailing 13 times at the break, and have a -15 goal differential before halftime. Leeds also have conceded an average of one goal per away match before the break, while Arsenal have won nine first halves in 17 home matches. Take the Gunners to lead at the break.

Given the return of Liam Cooper, who had to pull out of the Manchester City match due to an injury during warmups, I believe Leeds will continue to employ their five-at-the-back setup from last week.

Aside from the poor defending on set pieces, they actually performed decently against City. Marsch has said they are going to try to go out and get the win, but I am not sure how well Raphinha and Daniel James will fare against the Gunners’ defense. That defense will be aided by the return of Ben White, who missed last week due to injury but is expected to return for this weekend.

I’m not a huge fan of any total bet in this match, as the value simply isn’t there. However, if you want to play something in that realm, the alternative total of under three is the way to go. Given the North London Derby on the horizon for Arsenal, I can see them getting a two-goal lead and cruising from there. I don’t see more than three goals in this fixture, so take the Under three and at worst you should push.

Prediction: Under 3 Asian total (-105 at DraftKings)

While Leeds have been much improved since Marsch took over for Marcelo Bielsa, Arsenal are simply playing too well at the moment. Leeds’ frailties on set pieces were exposed by Manchester City, whose first two goals came off a free-kick and a corner kick. Their 18 set-piece goals conceded are the most in the league, and only three teams have scored more goals from set-pieces this season than the Gunners.

Arsenal have found the back of the net multiple times in each of their last three matches, and have done so in the last three meetings with Leeds. Arsenal should claim victory at home for the fifth time in seven matches, and beat Leeds for the fourth straight time in all competitions.

While the money line offers no value, as we discussed earlier, I love the spread of one goal in this match. I absolutely believe Arsenal win this match by a 2-0 scoreline, so the spread is the best play. If they only manage a one-goal victory then you’ll push at worst, but I like them to win this one easily. 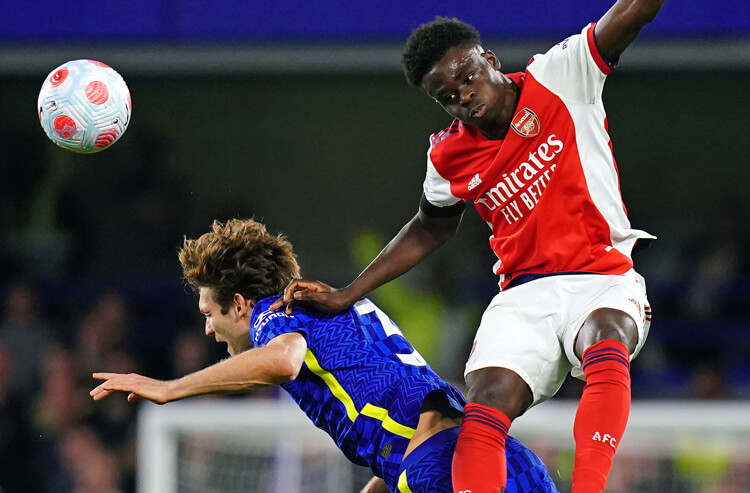 Arsenal vs Leeds Picks and Predictions: Gunners Unload on Feeble Underdogs
Provided by