Stars vs Avalanche picks and predictions for August 31

Nathan MacKinnon is playing over 23 minutes per game vs. Dallas in this series, with eight points and 21 shots on net.

The Colorado Avalanche - and NHL betting fans backing the Avs - don’t have much time to lick their Game 4 wounds as the Dallas Stars have jumped out to a surprising 3-games-to-1 lead and look to finish off the series on Monday in an NHL Playoffs betting back-to-back.

Both teams are down to their backup goalies as a total of 34 goals have been scored in the four games, with the lowest-scoring contest being a 5-2 Stars' win back in Game 2.

We break down the hockey odds and bring you our best picks and predictions for the Avalanche vs Stars on Monday, August 31 (9:45 p.m. ET).

It hasn’t been pretty, but Anton Kudobin has the Dallas Stars one win away from the Western Conference Finals. The Dallas backup has given up 13 goals through four games and has a 3-1 edge to show for it — thank you, offense.

Since starter Phillip Grubauer went down to injury in Game 1, Pavel Francouz has done his best matador impersonation, as the backup has given up 13 goals in his three starts. Colorado may have to score five or six to see a Game 6, something it is very capable of.

The Over is a combined 14-4-1 in Dallas and Colorado’s 19 total playoff games. Find more NHL betting trends for Stars vs. Avalanche.

Before the series started, many thought the only way could Dallas win this series was with tightly-checked low-scoring affairs, but here we are. The Stars are going toe-to-toe with the heavy-favored Avalanche and scoring in bunches. Dallas has won as +140, +130 and +115 dogs, as even Vegas didn’t take Khudobin and the Stars seriously heading into the series.

The Avalanche are the underdog for the first time in the playoffs and opened at +110 in a few books, while some other books actually have the Stars as +120. Getting Colorado at plus money is as good as it gets, especially with the Stars letting Colorado back into each game after Dallas opened up with multi-goal leads. Dallas is playing anything but solid defensive hockey and Colorado can still make a series out of this.

You know if there is a Michael Hutchinson sighting in the Conference semifinals things are not going swimmingly and such is the case with this shootout series. No game has scored less than seven goals as the Over is a perfect 4-0, and none of those wins has been of the sweaty variety.

The Dallas offense has scored at least five goals in each game and 21 in total. The Stars are 7-2-1 O/U in the playoffs while the Avalanche are also padding Over-backers’ pockets with a 7-2 O/U record in the postseason. We are willing to pay nearly any juice on the 5.5 opening total and would have no problem playing this up to 6. This might be a good game to dig into the alternative totals and lay something with bigger odds. If the team to be eliminated is trailing late, it will pull its goalie trailing by as much as three goals, giving the chance to hit some late Overs.

If there is one player who can put his entire team on his back and carry Colorado to a victory on Monday it's Nathan MacKinnon. Very few players have another gear like Nate Mac and his ability to take over shifts should be on display Monday with his team facing elimination.

MacKinnon has eight points in the series including three goals as the Avs’ star is playing over 23 minutes a game versus Dallas. His 21 shots on net lead the series and we could see Nate firing some more rubber on the porous Khudobin tonight. The anytime scoring prop is a great play at plus money (+130) but we are going bigger and taking the Colorado sniper to pot the game’s first goal at +600.

WHERE CAN I BET ON THE NHL? 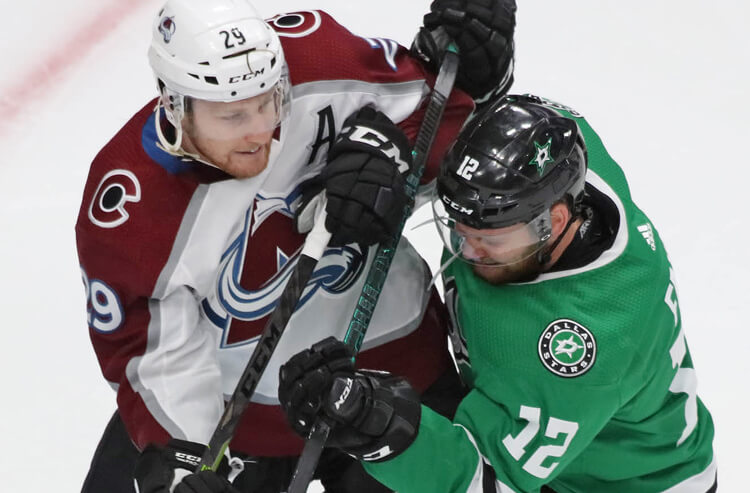 Stars vs Avalanche picks and predictions for August 31
Provided by