Vegas has won seven out of its last 10 games and will look to stay hot when they take on an Ottawa team that is struggling to gain traction. Find out why the betting edge lies with the home side in our Senators vs. Golden Knights betting picks.

The Ottawa Senators play the second of four road games on Wednesday when they face Pacific Division-leading Vegas Golden Knights.

The Senators, who are in last place in the Atlantic Division, are hoping for a better result than how they kicked off the road trip. They were beaten 5-1 by the Sharks on Monday, and it was the second straight loss for Ottawa.

The Golden Knights are looking for their second consecutive victory over a team with a losing record. They downed the Canucks by a score of 5-4 on Monday.

Can Vegas win its second consecutive game at home, or will Ottawa win its first game of the road trip? Continue reading our free NHL picks and predictions for Senators vs. Golden Knights on November 23.

The Vegas Golden Knights are hit-and-miss when it comes to playing teams with losing records. They defeated the Canadiens 6-4 on the road at the beginning of November and downed the Sabres 7-4 five days later.

Then at home, they laid an egg against the Sharks, 5-2. They did bounce back, however, defeating the Coyotes a week ago and coming back for a crazy victory on the road on Monday against the Canucks.

So, in recommending the puck line against the Ottawa Senators on Wednesday, it does come with some trepidation. You never know if the Knights are going to play like they are in first place in the Pacific Division or if they decide to drop down to their competition.

On November 3, the Golden Knights played Ottawa on the road and won 5-4, but the Senators pulled to within one in the third period and had a chance to tie it, coming up just short.

Besides, the Golden Knights should win this game by two or more goals. The Senators are 20th in points, while Vegas is second. The Golden Knights are fifth in goals for, averaging 3.65 a game.

In the last four Ottawa defeats, the Senators have lost by two or more goals in three of them. I think Vegas adds to that on Wednesday.

I can’t in good conscience tell people to back Vegas on the moneyline. It opened at -194 and has done nothing but go up since then. The highest as of Wednesday morning is -250 at PointsBet. The best price is -230 at FanDuel.

I am shying away from that line and drifting over to the puck line of -1.5 at +100. I don’t think it will be as big of a sweat as people believe.

What benefits Vegas tremendously is its depth of scoring. They have nine players on the squad that has 10 or more points. That is tied with the Bruins and Kings for most in the NHL.

Because of that, Vegas is second in points, fifth in goals for, and second in assists. It might behoove the Golden Knights to jump on Ottawa in the second period, as the Senators are -8 in that period. Against San Jose on Monday, they allowed three goals in the second, breaking a 1-1 tie, and could ultimately never recover.

The Senators are 26th in goals allowed, averaging 3.56 a game, and goaltending has been an issue. Cam Talbot, who will presumably start against Vegas, is 22nd in goals against average and save percentage.

Talbot got chased in the San Jose game, and the same thing could happen on Wednesday.

The last time these two teams played each other was three weeks ago, and the two easily cleared the Over, scoring nine goals collectively. In the last nine games, the Golden Knights have hit the Over seven times.

The Senators have been on an Under streak as of late. They have hit the Under in five straight games. The goaltending should be a big part of whether the total goes Under or Over. Talbot has struggled, allowing 2.79 goals a game and a SV% of .909.

With the Golden Knights averaging 3.65 goals a game, they should hit their average. However, they tend to score less when they are at home. In their last three games at T-Mobile Arena, two of those went Under.

The power play might also help this total go under. Ottawa is fourth in penalty minutes, having earned 236 so far this season. The Sens are 20th in the penalty kill with a 77.5% rate.

The Golden Knights are ranked just above them on the penalty kill at 19th. They have improved their power play from last year but are still 19th in the league, converting only 20.7% of the time.

This might be a bet I would stay away from, but if I have to choose, I am going to go with the Under.

The favorite is 7-0 in the last seven meetings between these two teams. Find more NHL betting trends for Senators vs Golden Knights. 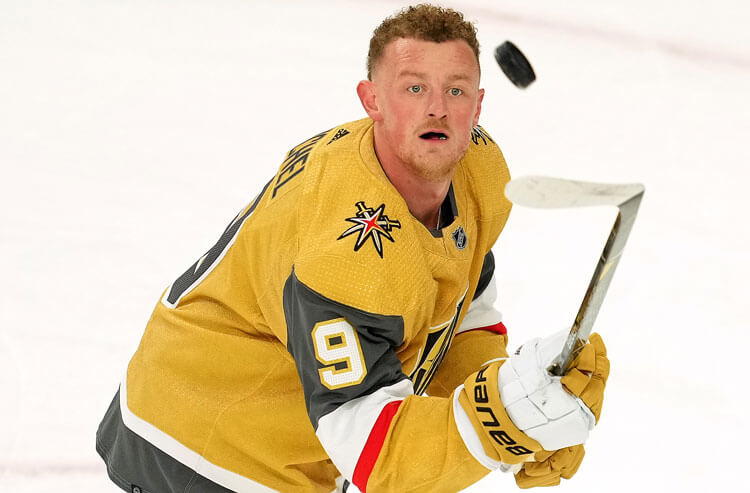