NHL betting odds have the slumping Florida Panthers listed as a significant home favorite over a Detroit squad that's actually won six of its last nine. We're jumping all over the moneyline price and backing the visitors at juicy plus-money odds.

The streaky Detroit Red Wings travel to South Florida to take on the slumping Florida Panthers on Thursday. The Panthers have lost seven of their last 10 games, while the Red Wings are fresh off back-to-back wins.

Detroit has won four of its last four road games and is in the playoff picture for the first time in six years. It had a three-game losing streak prior to the two wins but had won four in a row before that.

Florida hopes it can find some magic at home after being on the road for the last nine days. They are 6-2-3 at FLA Live Arena this season.

Which of these squads has the betting edge? Read our NHL picks and predictions for Red Wings vs. Panthers below to find out.

Though the Florida Panthers are heavily favored against the Detroit Red Wings, I actually like the visitor in this game. Detroit is on a two-game winning streak in which it defeated the Lightning and Blue Jackets.

The Panthers are available as high as -200, but I'm not sure they warrant those kinds of NHL odds. They're coming off a road trip that saw them go 2-2-1 but they're also banged up.

Centers Anton Lundell and Aleksander Barkov are questionable for the game and if both players are out, that leaves a gaping hole in the offense. Barkov has five goals and 13 assists on the season, while Lundell has four goals and nine assists.

When the two were out against Winnipeg on Tuesday, Sam Bennett was the first-line center and Eetu Luostarinen and Colin White centered the next two lines. The trio was held pointless in Winnipeg’s 5-2 victory.

The offense was supposed to be a strength of the Panthers, but it's dropped off significantly from last season, going from first in the NHL in scoring (4.11 goals per game) to 11th (3.42) despite leading the NHL in shot attempts at 38.7 per game.

The team has gotten production from Matthew Tkachuk, who was acquired in a trade with Calgary. The left winger leads the teams in points with 35, scoring 12 goals and 23 assists. His linemate, Carter Verhaeghe, leads the team with 15 goals.

Defense and goaltending, however, have been an issue for the Panthers. The team is allowing 3.35 goals a game, 21st in the league. Spencer Knight is 17th in goals against, averaging 2.64 a game. Knight, however, got pulled on Tuesday when he allowed three goals on 15 shots.

With Florida winning just three of their last 10, I’ll gladly take the Red Wings — who have won six of nine — to take this game.

A big reason for the Red Wings’ resurgence has been the play of goaltender Ville Husso. The 27-year-old came over from the Blues and it only cost the Red Wings a third-round pick.

With Husso 10th in the league in goals against average (2.54) and 12th in save percentage (.916), that's looking like a steal. He's also got 11 wins and leads the league with three shutouts.

The offense has also improved greatly. Last year, Detroit averaged 2.77 goals per game (25th) a season ago and is up to 14th this season at 3.20 goals per game.

The team has 11 players who have double-digit point totals. Dylan Larkin leads the team with 26 points while Dominik Kubalik leads the team in scoring (10) and Filip Hronek leads with 18 helpers.

Even though the Panthers are tough at home, losing only two games so far this season, the Red Wings are 4-1 in their last five following a win. The Panthers are in a slump right now, losing seven of their last 10.

The total for the game opened at 6.5 and hasn’t budged. The best price for the Over is -105 at several sportsbooks. The Under has a price of -110 at Caesars.

Goaltending should tilt this game to the Over. As good as Florida’s Spencer Knight has been, he struggled against Winnipeg on Tuesday. He allowed three goals on 15 shots and was pulled for Sergei Bobrovsky, who allowed another goal.

It would be expected that Knight would bounce back if he gets the start on Thursday as expected, but he has had mixed results in his last eight games. Knight allowed just a goal in games against Edmonton and St. Louis, but has also had performances where he allowed four, five, and six goals.

Detroit’s Ville Husso has been a little more dependable. In his last two games, he has allowed two goals in each. In the five games before, that he allowed four goals twice, but then had a three-game stretch where he allowed zero, one, and three goals.

The Red Wings have gone Over in six of their last seven games when they have one day of rest.

The Over is 5-0 in the Panthers' last five home games. Find more NHL betting trends for Red Wings vs Panthers. 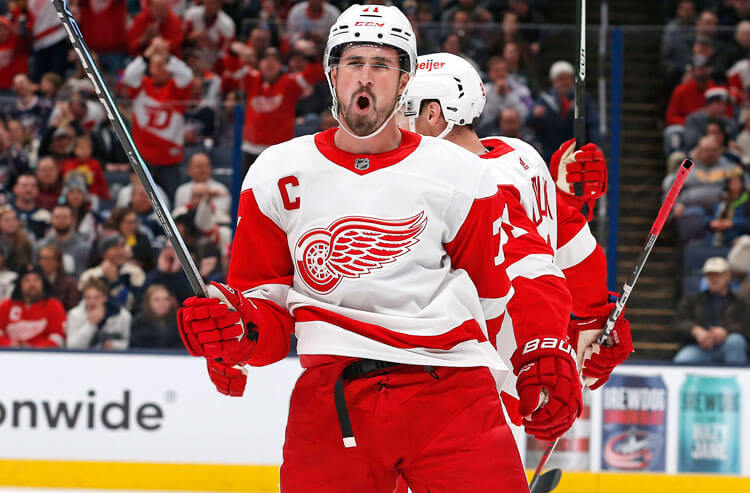