Nashville is fresh off nearly a week off as it heads to Tampa Bay to face a Lightning team that was upset by the Wings in their previous contest. There's a lot to like about this spot for the Predators — our NHL betting picks make the case for an upset.

Amalie Arena is the site for an interconference showdown between the Nashville Predators and the Tampa Bay Lightning tonight.

Nashville seeks its fourth straight victory, with the last two occurring on the road. The Lightning had won eight of their last 10 games — with their only defeats coming to the powerhouse Bruins — before being upset on home ice by the Red Wings.

Can Tampa return to its winning ways, or will the Predators prove to be chalk-busters? Find out in our free NHL picks and predictions for Predators vs. Lightning on Thursday, December 8.

Predators vs Lightning picks and predictions

There’s a solid case to be made for the Predators, and at advantageous odds for underdog players to boot.

Nashville enters this contest having not played a game since Dec. 2, a span of nearly a week. In fact, the Preds have only played three games since the Thanksgiving break, though two home games were postponed due to a water main break at Bridgestone Arena in that span. Being idle doesn’t seem to have slowed this team down — if anything, they are thriving.

After dispatching the Ducks at home on Nov. 29, the Preds went on the road and took down two of the better teams in the Metro Division in the Devils and Islanders on consecutive nights. The scoring has been well-balanced in this span, with Matt Duchene pacing those who’ve tallied multiple points in that stretch with six (one goal, five assists). Roman Josi, Ryan Johansen, Mikael Granlund, and Colton Sissons have all tallied exactly two goals over their last three games.

The Predators could battle Lightning goalie Andrei Vasilevskiy, who is in the midst of what’s statistically one of his worst years as a professional. His 2.75 GAA is his highest since his 2.77 GAA mark in 2015-16, and his .909 save percentage is a career low.

It’s not a certainty that Vasilevskiy will suit up. Though he’s started eight of his team’s last nine games, he’s yet to participate in five straight contests this year. If Brian Elliott — who’s 5-1-0 despite a 3.62 GAA and a .886 save percentage — gets the nod, the Preds’ price will almost surely tumble. The earlier you can back Nashville, the better.

Anything +150 or better would be acceptable.

Not only do the Preds have a varied attack on a bit of a roll right now, but they also boast a rock-solid netminder in Juuse Saros.

Since being chased by the Kraken on Nov. 8, Saros has started seven games and played to a 1.70 GAA and a .930 save percentage. That includes an OT loss to Tampa on Nov. 19 in which he turned back 36 of the Bolts’ 39 shots on goal.

The Lightning offense has struggled to find the twine when skating 5-on-5 of late, including a goose egg in that area against Detroit on Tuesday night. Only five of Tampa’s last 11 goals have come without some sort of man advantage.

Though there are few meaningful negative trends to find for the Lightning, underdog bettors can note some positive trends for Nashville. The Predators are 4-0 in their last four games after allowing two or fewer goals in their previous game and hold an identical mark in their last four outings against teams with winning records.

The Over could cash if the refs call this one tight, as each power play is hot entering this tilt.

Meanwhile, the Bolts had a streak of 10 games with at least one official power-play goal snapped by Detroit on Tuesday. Nikita Kucherov is third in the NHL in power-play points this season, trailing only the dynamite duo of Connor McDavid and Leon Draisaitl.

The Over is 4-1 in the last five meetings between these two teams in Tampa Bay. Find more NHL betting trends for Predators vs Lightning. 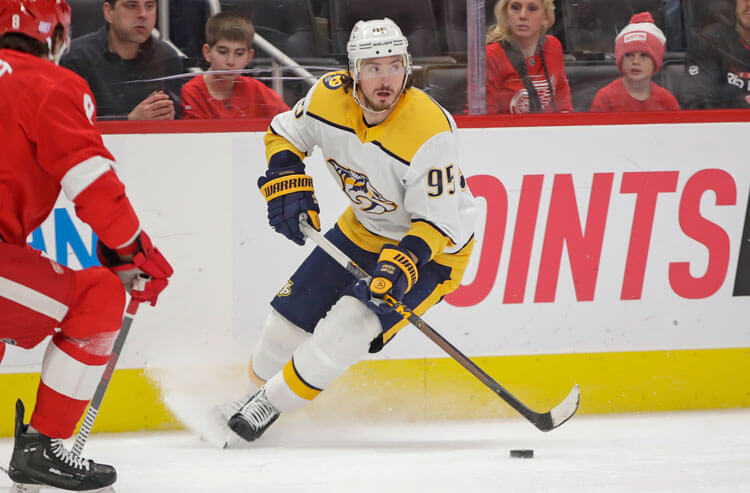