After a 5-0 win in Game 1, Toronto shut up all the haters who were questioning this team's postseason past. Will it be able to make it two straight, or will Tampa tie up the series. Find out our thoughts in our NHL betting picks for Lightning vs. Leafs. 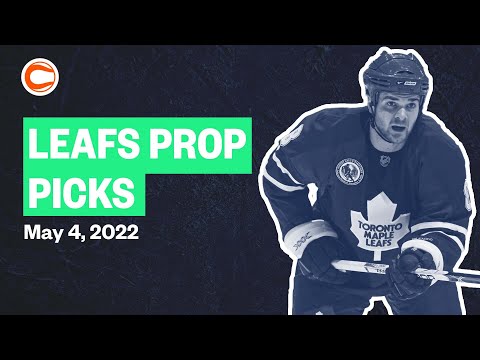 The Toronto Maple Leafs’ speed dominated Game 1 versus the Tampa Bay Lightning but Jon Cooper and the Bolts have not lost back-to-back games in the postseason in two years — spanning 45 total games.

Can Tampa bounce back from an embarrassing Game 1 performance? Can Toronto continue to dominate possession and get another stellar start from Jack Campbell? Find out in our free NHL betting picks and predictions for Lightning vs. Maple Leafs.

The Leafs are 17-4 SU in their last 21 games as -150 favorites or shorter this season. Find more NHL betting trends for Lightning vs. Maple Leafs.

The Toronto Maple Leafs played a near-perfect game Monday in their series opener against the two-time defending champions. The Lightning were shut out and finished 0-for-5 on the power play, which included a first-period five-minute major. Many are saying the Bolts had an off game and will bounce back in Game 2, but can the team that has played more hockey than anyone else over the last three seasons keep up with the speed of the Leafs?

Toronto seemed to generate just as many short-handed scoring opportunities as Tampa Bay did with the man advantage. The Lightning looked slow and sloppy versus a motivated Leafs team that avenged their 8-1 loss in Tampa just two weeks ago.

The Bolts wanted a physical game and the Buds obliged, but the home side also showed off its best asset — their speed upfront. With Sheldon Keefe’s current top-three lines, his squad has elite speed on each set.

Pierre Engvall had five shots on net and finished with the third-highest expected goals, Ilya Mikheyev had an assist and four shots attempts, while Auston Matthews, Mitch Marner, William Nylander, and even Ondrej Kase dominated and finished with an xgoal percentage above 80%. Keefe mixed his lines up throughout the game, but the speed this team has on the wings is hard to game plan against if you don’t have the proper assets.

Michael Bunting is also trending towards playing tonight which would reunite the top line. His addition would make the middle-six group stronger with Alex Kerfoot hopping back to the second or third unit.

The Leafs’ fourth line also played better than Tampa's fourth and frustration seemingly set in late with Corey Perry and Patrick Maroon, who made zero impact on the game. Kyle Clifford has been suspended for this game but Toronto has plenty of depth for that final line and Jason Spezza could draw in tonight.

Jack Campbell wasn’t too busy but stopped everything that came his way. Over his last eight playoff games dating back to last season, the goaltender that so many pundits questioned coming into the season owns a 1.59 GAA and a .941 SV%.

The books have also warmed up to the Leafs, who sit as -130 moneyline favorites after closing at -120 in Game 1. We know the Bolts are 14-0 straight up following a loss in the playoffs over the last two seasons, but it’s going to be really hard for Cooper's squad to slow the Leafs down. Including Game 1, Vasilevskiy has a 2.95 GAA with a 906 SV% over his last 26 games.

The Tampa Bay offense was out of sync in Game 1. Even its elite power play forgot to show up and allowed more scoring chances to the Leafs than it created. Tampa will find a way to get on the scoreboard tonight, although it may not be often. However, with the total sitting at 6.0, Toronto could still do the heavy lifting for this Over if the Bolts score two or fewer.

Matthews and Marner got the proverbial monkeys off their backs in Game 1 which should make things easier going forward for the best duo in hockey. The Leafs showed they can score at any moment with three goals at even strength, one on the power play, and one shorthanded on Monday. This team led the league in shorthanded goals on the season and finished with the best PP.

Vasilevskiy won himself a Conn Smythe last season but he has been leaned on heavily over the last three seasons and has been a below-average goalie since March. He has a 2.95 GAA across 26 games and is 8-3 to the Over across his last 11 starts.

In a league where load maintenance is followed by nearly every team for their goaltenders, Vasilevskiy is one of the few who has played 205 of his team's 257 games over the last three seasons, good for an 80% start share. That is a lot of hockey.

Game 1 also saw a ton of penalties, as the referees tried to keep things under control. It didn’t slow down the emotions on both sides as things got rough late and that should spill over into tonight. The Clifford hit on Ross Colton likely stirred the pot as well. We could see just as many whistles tonight and it wouldn’t surprise us to see plenty of 4-on-4 as the striped shirts try to keep control.

The Leafs are better offensively with Bunting joining the lineup and the speed this team has on the wings makes them dangerous at all times. With the last change, Keefe has the advantage of creating his favorite matchups and it worked in Game 1. With the depth the Leafs have in their Top 9, Cooper and the Bolts might not have many options to slow down this Toronto team that showed it can have a loud and motivating barn.

If this total hits 6.5, we’re likely off the Over, but at 6 — the lowest total of the last four meetings — we’re all in. So far in the playoffs, we’ve seen teams pull their goalies early and also down as many as three goals. We might need an empty-netter to win this, but getting the 6 instead of the 6.5 is massive and something you don’t see often in Toronto totals.

The Leafs mixed up the lines throughout the game on Monday, but William Nylander finished with the highest xgoals despite being held off the scoresheet. He tied for the team lead in shot attempts (six) and was second in shots on net (four). He is driving the offense on the third line and saw time with John Tavares on the second unit as well.

The books are giving us a shot total of 2.5 on Nylander and we figure he could see some better matchups if Cooper tries to slow down the top line. He’s also on PP1, and with the refs likely trying to keep things under control, he’ll see plenty of time on the power play (and possibly 4-on-4).

The Leafs are averaging 36.75 shots per game versus the Lightning over the last four meetings and this prop is usually priced much shorter than -118.