The Islanders struck first, taking Game 1 on the road by a score of 2-1. It marked the seventh time in Tampa's last eight games that the Under has cashed. Can we expect another low-scoring tilt for Game 2? Find out with our Islanders vs. Lightning picks.

The New York Islanders and Tampa Bay Lightning face off in the second contest of their Stanley Cup semifinals series on Tuesday night.

The Islanders upset the Lightning 2-1 on Sunday to draw first blood in this best-of-seven playoff series. Despite New York prevailing as +160 underdogs in that contest, NHL betting lines have Tampa Bay installed as -181 favorites for Game 2.

Here are our best free Islanders vs. Lightning picks and predictions for Tuesday, June 15, with the puck dropping at 8 p.m. ET.

William Hill US pegged Tampa Bay a -180 favorite Sunday evening and got to -200 by this morning, then backed up to -190. The Lightning, aiming to rebound from a Game 1 loss, are taking 62 percent of moneyline tickets and 57 percent of moneyline dollars. "I’m sure there will be a lot of Tampa Bay parlays today, just because the public will see must-win and think that they won’t lose both at home," WillHill director of trading Nick Bogdanovich said. "I’d assume we’ll need Islanders huge in parlays, but straight bets, we’ll be pretty even." The total dipped from 5.5 (Under -150) to 5 (Over -135), although the Over is attracting 59 percent of tickets/83 percent of money.

The Under is 7-1 in Tampa Bay's last eight games overall. Find more NHL betting trends for Islanders vs. Lightning.

The first game in this series was a defensive battle with New York building a 2-0 lead midway through the third period before Tampa Bay's Brayden Point scored in the final minute to make it a one-goal contest.

Despite that offensive performance from the Lightning, they are the superior offensive team in this matchup. The Bolts ranked eighth in the league with 3.21 goals per game during the regular season despite missing 2019 Hart Trophy winner Nikita Kucherov until the playoffs began.

The Islanders have been filling up the net during the playoffs but struggled to score during the regular season. They ranked just 21st in goals per game with 2.71, with that number dropping to a pathetic 2.0 goals per game on the road.

They will find it tough to get the puck past Lightning goalie Andrei Vasilevskiy, who went 18-2 with a 1.76 GAA and .936 save percentage at home this season.

Despite defending the Stanley Cup, the Lightning finished the regular season with just the third-best record in their division. However, that had a lot to do with how terrible they were between the pipes whenever Vasilevskiy was given a rest day.

The Bolts have been dominant at home with Vasilevskiy starting in net, going 88-27 in their last 115 regular season games at Amalie Arena. Expect a bounce-back performance from the Lightning and take them on the moneyline.

Game 1 saw only three total goals and it felt even more defensively focused than that, with Tampa Bay's lone tally coming in the final minute and New York's second goal coming on a shot from the point that Vasilevskiy typically has no problem dealing with.

The Under has now cashed in three straight head-to-head games between these teams and, interestingly enough, four of their last six meetings have ended with a score of 2-1. While both teams have been finding the back of the net lately, the play of their goalies has been crucial to their success.

Vasilevskiy was recently named a Vezina Trophy candidate for the fourth season in a row. He has a 2.23 GAA and .934 save percentage in 12 playoff games this year and had a spectacular 1.90 GAA in 25 postseason contests last summer.

Isles goalie Semyon Varlamov was unlucky not to be named a Vezina Trophy nominee himself after going 19-11-4 with a 2.04 GAA and .929 save percentage. He has continued his strong play in the postseason and is coming off an excellent outing in Game 1 where he turned aside 30 of 31 shots.

With the Islanders going 25-10-2 to the Under in their last 37 games on the road and the Bolts cashing the Under in seven of their previous eight contests overall, take the Under again.

Did you know that if you parlayed today’s NHL Islanders vs. Lightning picks, you could win $21.11 on a $10 bet? 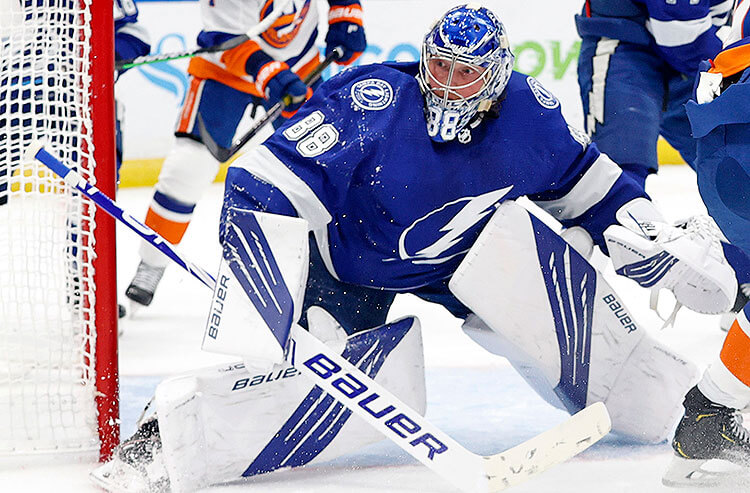 Islanders vs Lightning Game 2 Picks and Predictions: Goaltending Steals the Show
Provided by