The Devils head across the border to take on Matthews and his squad. With both sides set to roll out with subpar netminding, we're expecting this game to go Over and the Leafs to cover the NHL puckline in our picks and predictions. 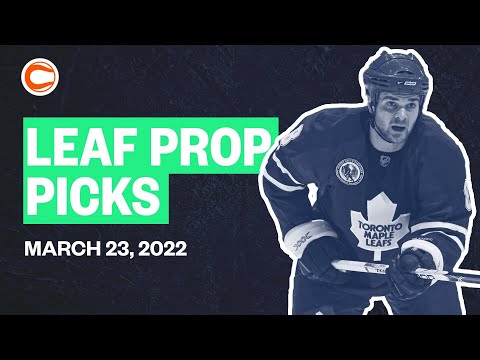 The Toronto Maple Leafs are staying pat with their goalie situation following the deadline and that decision will be put under the microscope tonight at Scotiabank Arena when the Buds face a New Jersey Devils’ offense that hung seven goals on the Vezina frontrunner just last night.

Does it matter who is net for the Leafs right now as they might have to win another high-scoring affair? Can the Devils stay competitive after playing a big rivalry game last night and having to cross the border? Find out in our free NHL picks and predictions for Devils vs. Maple Leafs.

The Over is 8-1-1 in the Maple Leafs’ last 10 when their opponent scores five goals or more in their previous game. Find more NHL betting trends for Devils vs. Maple Leafs.

The trade deadline has come and gone and the Leafs have made some positive changes to the defense with the addition of former Norris winner, Mark Giordano. But Kyle Dubas stayed pat with the current goaltending situation which will be on full display tonight.

With Jack Campbell dealing with a rib injury, Toronto is stuck with rookie Erik Kellgren and Petr Mrazek who just went unclaimed on waivers. It’s not an ideal situation for Toronto, but it’s one that it has been rolling with for the past couple of weeks and the results have been underwhelming.

Kellgren has made three starts so far in his NHL career but was lit up on Saturday in Nashville in a 6-3 loss. That leads us to think Sheldon Keefe will roll with Mrazek who has allowed an abysmal 20 goals over his last five starts and is going through the toughest part of his NHL career currently.

Neither goalie gives us much confidence, but this is a Toronto offense that knows how to score and isn’t afraid to win a shootout and this matchup might be just that.

The newest additions to the roster are playing down in the lineup which is ideal as they'll need more time to adapt to the team's systems and these roles for Giordano and Colin Blackwell aren't over-exposing them tonight.

The Devils played at home last night versus the Rangers and skated away with a massive 7-4 win and chased Vezina frontrunner Igor Shesterkin in the process.

That was a big rivalry game for them and now they have to regroup, cross the border and face a waiting Toronto team who last played Saturday. This is not a great schedule spot for the visiting side

New Jersey is also dealing with goalie issues of its own as Mackenzie Blackwood and Johnathan Bernier are on the shelf. It ran with Nico Daws last night versus the Rangers meaning the Leafs could see No. 4 goalie Jon Gillies who is 3-9 straight up in his last 15 games with a 3.85 GAA and a .886 SV%.

The Buds managed to chase Gillies in the last meeting when they scored six goals against the goalie across 28 shots before he was yanked.

As the Leafs have shown in their two wins over the Devils, they can rack up goals versus this team as they’ve hung 13 total goals in the two meetings this season.

Auston Matthews is unstoppable at the moment and has four goals and two assists versus New Jersey this year while the defense has been revamped with the addition of Giordano and, despite some injuries, is still pretty solid through the three pairings.

Toronto was -360 on the moneyline in the last meeting on home ice between these two teams and saw fifth-string goalie Akira Schmid and now face a traveling Devils team who are on the backend of a look-ahead spot.

The Leafs might be hard to trust but tonight’s -330 line might actually be a little short despite their issues in net. We wouldn’t empty the bank account here, but they are still the much better team and have the offense that can make up for the lack of talent between the pipes.

There is only one way to look at this total and that’s with the Over, even at 7 after opening at 6.5.

The Devils just scored seven goals on the best goalie in the league in Shesterkin, and over the last 30 days, New Jersey is scoring 3.69 goals per game while simultaneously giving up 3.69 gpg.

The power play is running warm at 20% while the penalty kill could get exposed as it is the second-worst unit in hockey (66.7%) over that stretch. It is 11-5-1 O/U in its last 17 games and has hit the Over in four straight. Gillies (unconfirmed) is 6-1 to the Over in his last seven starts.

The Leafs have been playing perfect Over hockey of late as this offense is rolling and they’re still struggling to get saves. No team is seeing more total goals per game over the last 30 days than them at 8.08.

They have allowed their opponents to score four or more goals in eight of their last 11  and are 10-4-1 to the Over in their last 15 games, as well.

This matchup will feature the least talented goaltending on the day’s slate and we’re confident in that despite not even knowing who will start.

The Leafs’ choices are between Kellgren and Mrazek and it doesn’t really matter as Toronto has been giving up a ton of shots over the last four games (36 per game), is introducing a new defenceman to the blue line, and has had below-average goaltending in seven of its last nine games.

New Jersey has to choose between two goalies who have a GAA north of 3.00 this season while their better tender, Daws, played last night in Newark.

Both meetings this season closed with a total of 6.5 but that total could have easily been 7. 18 goals have been scored in the two meetings with just one of those coming with the man advantage.

Both teams have had no problem scoring at even strength while Matthews has torched the Devils for four goals including a hat trick in the first meeting.

We’re looking for the Over to go a perfect 3-0 in the third meeting between these two clubs tonight and feel, even at 7, there could still be some steam on the Over as the day progresses.

We may like the Leafs in this game but that doesn’t mean the Devils won’t find the scoreboard. Jack Hughes is tied for the team lead in points over the last 30 days with 19 points and seven goals.

He had two goals last night versus Shesterkin and has been shooting more than anyone else on this New Jersey team with 4.00 shots per game over his last 10.

Hughes has two points versus the Leafs in the previous two meetings and with the season hitting a point that seems to be slowing some players down with the extensive schedule, putting our money on the 20-year-old legs of the former first-round pick on the backend of a back-to-back doesn’t scare us.

The Leafs have been more than generous to their opponents of late and their situation in net is one that favors the Devils’ skilled players. Hughes will get his chances tonight and at +225 — the fifth shortest odds to score (four Leafs ahead of him) — we’re happy to ride. 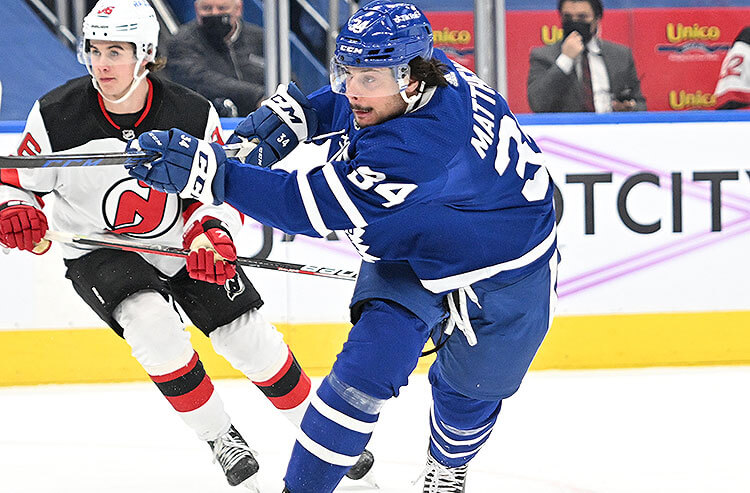