Both Montreal and Vancouver have struggled mightily this season, but our NHL betting picks tonight are leaning towards the Habs and star Nick Suzuki — who could break out against a Canucks team on the tail half of a back-to-back.

The Vancouver Canucks continue their East Coast road trip as they head to the Bell Centre to face off against the Montreal Canadiens tonight. In the midst of a brutal season, the Habs fired GM Marc Bergevin yesterday but remain slim home favorites for this contest against a Canucks squad that has also been terrible — and will be playing the tail half of a back-to-back.

NHL betting lines opened with Montreal installed at -125 with the Over/Under at 6. Here are our best free Canucks vs. Canadiens picks and predictions for Monday, November 29, with the puck dropping at 7:30 p.m. ET.

After losing at Boston last night, Vancouver opened as a +105 underdog (with Montreal -125) at the time of writing, while the total opened at 6. Use the live odds widget above to track any future line movements right until puck drop and be sure to check out the full NHL odds before betting to ensure you get the best number.

Canucks vs Canadiens head-to-head record in 2021

The Canucks are 14-37 in their last 51 games playing on 0 days rest. Find more NHL betting trends for Canucks vs. Canadiens.

Canucks vs Canadiens picks and predictions

The Canadiens made a Cinderella run to the Stanley Cup Finals last season but the slipper has fallen off and they currently sit 29th in the NHL standings with a point percentage of .304. There are several reasons for that steep decline, including a dropoff in special teams play, a natural regression from outplaying their talent level, and the absence of star goaltender Carey Price.

The Habs are fresh off a 6-3 road victory over the Penguins on Saturday but still have just two wins in their previous eight games. They are averaging the fifth-fewest goals per game (2.35) in the league while allowing the second-most (3.61), and they're a Bottom-4 team when it comes to both the power play and penalty kill.

The Canucks lost 3-2 to the Bruins last night and have just one win in their last nine games. They are just one spot ahead of the Habs in the standings with a .318 point percentage and, like Montreal, they are near the bottom of the league in nearly every metric.

The Canucks are marginally better when it comes to goals allowed per game (3.29) but they score even less at just 2.29 gpg. And while Vancouver performs slightly better with the man advantage, it's even worse when it comes to killing penalties, ranking dead-last with a PK percentage of 62.3.

Both of these teams are downright terrible, but the Canucks are playing on the road on the tail end of a back-to-back and have gone just 2-9 in their last 11 trips to Montreal. That's enough for us to lean towards the home side.

Since both of these teams score at such a low clip — but also surrender a ton of goals — it's tough to figure out whether to lean towards the Under or Over.

That said, the trends are definitely leaning in one direction, with the Over going 4-1-1 in the Canucks' last six away games while the Canadiens are 5-1 O/U in their previous six contests at home. The Over has also gone 7-2-1 in the last ten meetings in the head-to-head.

Despite their scoring ineptitude this season, these should be two of the better skating, higher-skilled teams in the league: Vancouver skaters like Elias Pettersson, Brock Boeser, and Oliver Ekman-Larsson should be producing at a much higher rate than they are, while Montreal ranks a respectable 12th in the league in high danger chances per 60 minutes at even strength.

There are plenty of top scorers on both teams in the middle of ugly slumps. Vancouver's Boeser, who had 49 points in 56 games last season, broke an eight-game pointless streak with an assist last night. Pettersson, who won the Calder Trophy in 2019 and had been playing at near a point-per-game performance in his career, also has just one point in his last nine games.

Montreal has a slumping skater of its own in Nick Suzuki. The 22-year-old broke out with 41 points in 56 games during the regular season last year before adding 16 points during the playoffs. Suzuki has just one point in his last eight games but it's worth mentioning that six of those contests took place on the road.

He typically plays much better in front of his home fans, scoring 10 points in 11 games at home compared to five points in 12 games on the road. The same tendency held true last season, when he notched 26 points in 28 games at the Bell Centre while scoring just 15 points in 28 away contests.

He also registered a point in all four home games against the Canucks last season, totalling three goals and three helpers. Look for Suzuki to break out of his slump against some weak Vancouver goaltending tonight. 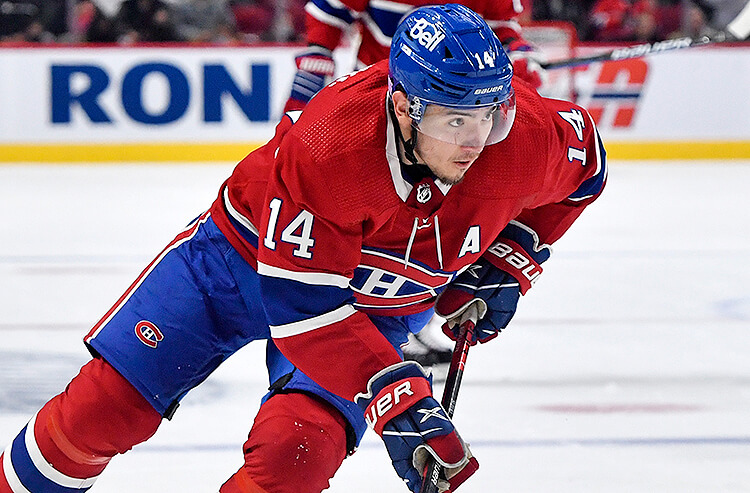 Canucks vs Canadiens Picks and Predictions: Fade Vancouver On Tail End of Road B2B
Provided by

Lightning vs Kings Picks and Predictions: Back Under-Valued Kings vs. Road Lightning
Josh Inglis | Jan 18, 2022
About Us
Contact Us
Careers
Our Team
Brand
Testimonials