Tampa Bay and Boston have won a combined 10 straight games and while Boston has the much shinier record at this juncture, our NHL betting picks are leaning on the Lightning and the best goalie in the world to get the job done Monday night.

This matchup between the Tampa Bay Lightning and the Boston Bruins should be an incredible one. with the Bruins taking their NHL-best 16-2 record down to Florida.

The Bruins haven’t had many flaws, but they will be tested against a very strong Tampa Bay team with the best goalie in the world between the pipes.

Read our NHL picks and predictions below to see how it all plays out.

Bruins vs Lightning picks and predictions

The Boston Bruins have been one of the most fun teams to watch this season. They've been incredibly dominant during their six-game win streak, outscoring their opponents by a 24-7 margin.

They are quite literally the No. 1 team offensively and defensively, averaging 4.11 goals per game allowing just 2.06 on the other end.

That being said, the Tampa Bay Lightning aren’t too shabby themselves. The Lightning are scoring 3.39 goals per game and their power play has been very successful as well, converting at a 24.7% rate, scoring goals in four straight games (6-for-16).

Andrei Vasilevskiy has been outstanding in his previous two starts, only giving up three goals on a total of 72 shots. He hasn’t been at his best all season, but he is certainly starting to find his game again.

The Lightning should be fired up to play against a very good Bruins team on home ice. This is a statement game for the Bolts who are 6-2-1 at home this season.

The Bruins are red hot right now, but their last four opponents haven’t been as good as this Lightning group. Back Tampa to get the win in front of its home crowd.

This is going to be a very tightly-played game between two of the best teams in the Eastern Conference.

The Bruins and Lightning haven’t met yet this season, but rest assured, they're very familiar with one another. The Bruins haven’t seen a team quite like Tampa in their past few games, with most of their opponents during this six-game win streak on the weaker side of the spectrum.

The Lightning are generating 14.82 high-danger chances per 60 minutes and one player to watch specifically in this game is their captain, Steven Stamkos. He's tied for the team lead at 10 goals along with Nikita Kucherov, but he's also leading the entire NHL with 11.3 expected goals.

There's no denying that the B's have been very strong defensively this season. In fact, I would argue that Linus Ullmark might be the lead candidate for the Vezina trophy right now as he is sporting a .937 save percentage and a 1.89 goals against average.

Even though Ullmark has been fantastic, Andrei Vasilevskiy still owns the title as the league's best goalie and he knows he needs to prove that again tonight. I expect to see a fired-up Tampa group tonight.

This has all of the ingredients for an all-time classic and even though there is a ton of talent on both sides, the story right now is about the goaltending battle between Linus Ullmark and Andrei Vasilevskiy.

Like I said before, Ullmark has been hands down the best goalie in the league to this point of the season, but Vasilevskiy should never be slept on. Vasilevskiy’s numbers might not jump off the page, but he has still been solid this season. He is sporting a 7-5-1 record with a .909 SV% and a 2.84 GAA with a +4.2 GSAx.

The Bruins have been the best defensive team in the league, limiting their opponents to just 9.06 chances per game and allowing 29.3 shots on goal against, but the Lightning have a ton of firepower up front and they generate a ton of scoring chances along with shots on goal, so this won’t be an easy game whatsoever for Boston.

That being said, this goalie matchup is as strong as it gets and I think both Ullmark and Vasilevskiy will be at the top of their game. I expect it to stay Under. 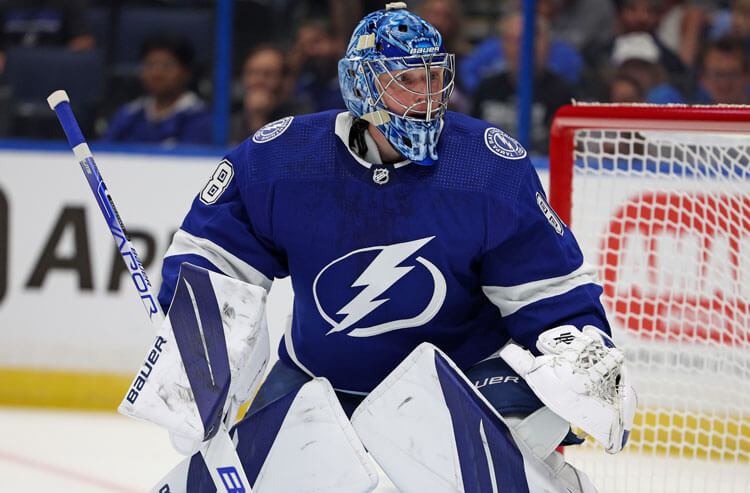 Bruins vs Lightning Odds, Picks, and Predictions Tonight: Can Tampa Slow Down Red-Hot Bruins?
Provided by