The Bruins head to Philly to play the Flyers, a team they won six of eight against last season. Look for that trend to continue on the backs of the Bruins goaltending and defense. See how the matchup plays out in our Bruins vs Flyers picks.

The well-rested Boston Bruins travel to the Wells Fargo Center Wednesday to take on the Philadelphia Flyers who are fresh off a 6-1 thumping of the expansion Kraken. The Bruins have played just one game to date but stymied the Stars 3-1 on Saturday while the Flyers have scored 10 goals through two games. The Bruins took six of the eight meetings last season outscoring Philadelphia 32-20.

Philadelphia opened as +100 home underdogs with a total of 5.5 leaning heavily to the Over.

Here are our free NHL betting picks and predictions for Bruins vs Flyers for Wednesday, October 20.

Bruins vs Flyers head-to-head record since 2020

The Bruins are 4-1 SU in their last five meetings in Philadelphia. Find more NHL betting trends for Bruins vs. Flyers.

Bruins vs Flyers picks and predictions

It’s tough to judge the Boston Bruins after just one game that saw them win 3-1 thanks to a successful penalty shot and an empty-net goal, but one strength the B’s will have this year — other than their first line and PP1 — is in net.

Jeremy Swayman started 10 games for Boston last year and recorded a .945 save percentage to go along with a 1.50 GAA. This is a goalie who lasted just 10 games in the AHL before getting promoted. Swayman saw the Flyers in his first NHL start last season and made 40 saves in a 4-2 Boston win. The 22-year-old finished with a 1.6 goals saved above expected in the Bruins’ opener versus the Stars and is a very good fit for Bruce Cassidy’s defensive-minded system.

The Flyers, on the other hand, could struggle again in net with Carter Hart who finished last season with a 3.67 GAA and a .877 save percentage in 25 starts last year. His recent inconsistencies have been well documented and may be dragged into the 2021-22 season as well. Hart allowed four goals and two in the shootout versus the Canucks in the opener as -134 home favorites. He followed that up with a low-volume 6-1 win versus the Kraken as -134 home favorites where he only saw three high-danger chances.

The Flyers have had no problem scoring out of the gates but facing a Boston team that takes pride in shutting teams down and has arguably the best defensive forward lines in hockey, it’s tough to see the Flyers creating as many chances as they did versus a pair of projected sub-90 point teams.

Boston matches up well against the scoring potential of the Flyers’ top-three lines as Taylor Hall, Charlie Coyle and Craig Smith make up a well-rounded second line while Cassidy is rolling out Nick Foligno, Jake DeBrusk and Erik Haula on the third line.

Boston closed at -186 on the ML at home last Saturday versus the Stars. The Flyers were -134 versus a last-placed Vancouver team in their opener and then -134 on the ML versus Seattle on Monday. We don't see any mispricing with the Bruins at -120.

Having this much time to prepare for a great coach like Cassidy has us leaning on the visitors Wednesday night but if Philadelphia’s price reaches +120, that’s our price break. Philly closed at +120 or better once last year at home but started back-up, Brian Elliott.

This is not an easy total to handicap as we have one of the best defensive teams in Boston who is riding a hot goalie while the Flyers are a typical Over team that has no problem scoring to open the season but have also been known to struggle on the backend.

These two teams did meet eight times during last year’s modified season. The Over hit in five of the eight matches as we didn’t see a closing total above 5.5. Two of those Over needed goals in the final seconds to hit.

Swayman has not allowed more than three goals in any of his 12 games in his short NHL career while 10 of his 11 starts have not seen more than six total goals. The Boston goalie is 4-7 O/U, dating back to last season, with three of those Overs being six-goal games. It’s not often you get no-sweat Overs with the Bruins and now that Swayman is the man, that trend will likely continue throughout this season.

Reading too much into Philadelphia’s 5-4 shootout loss and 6-1 win could push bettors into the Over 5.5 (-125). Philly finished with just 3.12 expected goals in its 6-1 win Monday and Boston and Swayman aren’t about to give up a trio of unexpected goals with a full three days of prep.

Both teams feature elite power plays which could be the difference in the Over/Under. In their eight meetings last year 16 PP goals were scored which accounted for roughly 30 percent of all goals scored. Combined, both teams are 1 for 8 on the PP to start the season and 12 for 14 on the PK. It’s an incredibly small sample size but neither PP is rolling early while the PKs have been responsible.

Neither goalie is confirmed as of yet and that could be true right up to game time, but our money is on Hart and Swayman starting which is the best case for the Under 5.5.

We’re leaning on the Under with these two not playing a lot of high-scoring meetings recently. Betting on Boston Overs is usually a sweaty occurrence and getting more than five goals on Wednesday is probably more of a 48-52 percent probability which gives us a little value on the Under 5.5 at +100. Unders are hitting at 53 percent to open the year and are 4-8 O/U on totals of 5.5 over the last four days. 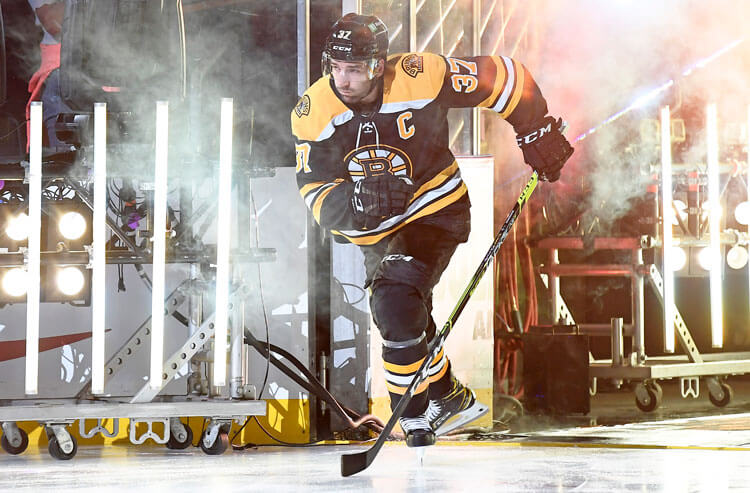 Bruins vs Flyers Picks and Predictions: Trust The Bruins Defense In Philly
Provided by