Bruins vs Avalanche Picks and Predictions: No Stopping the Rolling Avalanche

Colorado has won 17 straight games at home, and the league's hottest team will welcome Boston to Ball Arena on Wednesday night. We're breaking down the NHL betting value for you in our Bruins vs. Avalanche picks and predictions.

The Colorado Avalanche will look to push their home winning streak to 17 games tonight versus the visiting Boston Bruins, who begin a three-game road trip tonight. The Avalanche are riding an incredible 17-2 SU stretch and haven’t lost at home since November 3.

Can Pavel Francouz continue to stay hot and stymie this Boston offense after posting back-to-back shutouts? Can the Bruins shake off that 5-3 loss to the Ducks as heavy -244 home NHL betting favorites?

Find out in our free NHL picks and predictions for Bruins vs. Avalanche.

Bruins vs Avalanche head-to-head record (since 2017)

The Under is 5-0-1 in Avalanche’s last six games as a favorite. Find more NHL betting trends for Bruins vs. Avalanche.

Bruins vs Avalanche picks and predictions

The Boston Bruins will be tasked with doing something no team has been able to do since the beginning of November, which is to beat the Avalanche on home ice. Since their overtime loss to the Blue Jackets on November 3, the Avs have ripped off 16 straight home wins and have outscored their opponents 76-37 in the process. Since the beginning of November, the Avs lead the league with a .828% point percentage. The one thing that had been slowing them down — goaltending — has also seemed to be solved with the recent play of Pavel Francouz.

Since Darcy Kuemper got pulled versus the Maple Leafs on January 8, Francouz has been seeing more starts and is 6-0 SU (in four starts) with a 1.65 GAA and a .942 SV%. This was a Colorado team that was stacking wins while still allowing 3.37 goals per game. Now that it's getting solid netminding, betting against this team is not recommended right now.

Colorado's goalscoring has slowed down a bit of late but this is still the best offense in hockey (4.10 goals per game). The Bruins haven’t been their normal stingy selves since Christmas, as Bruce Cassidy’s club is allowing nearly 3.00 goals per game over that stretch. Boston is 10-3 SU over the last month but 10 of those games came on home ice, which is where the Bruins have played their last seven games.

Following seven straight comfortable games at home, the Bruins have a tough road trip that starts tonight in Colorado, heads to Arizona on Friday, and then Dallas for Sunday. Those are a lot of miles in five days.

The Bruins haven’t announced a starter in net yet but neither choice is giving us much confidence. Tuukka Rask gave up five goals to the below-average Anaheim offense on Monday. He’s allowed 14 goals in his four starts since joining the team and was pulled in one of them. Backup Linus Ullmark has allowed three goals in each of the two games he’s started since Rask came aboard, as well. Ullmark was playing great and there is an argument to be had that Rask jumping back into the lineup was detrimental to Ullmark’s production.

The Bruins have been relying on an offense that has caught lightning in a bottle and is scoring 3.92 goals per game but the Avs are a great defensive team that sits third in goal% and fifth in xgoals against at even strength. The Bruins are a great 5-on-5 team in their own right, but the Avalanche are playing their best defensive hockey right now and have surrendered just six goals in their last six games.

No team has taken two points in regulation versus the Avalanche at home since October 26, which is a stretch of 18 straight games. Colorado hasn’t needed to score five goals to win games lately, as the Under is 5-1 in its last six, all of which have been victories.

This +155 ML price might be a little short, but not by much. Toronto recently closed at +150 in Colorado and the Rangers closed at +170. Boston is closer to +170 here in our opinion. We’re happy to ride this home heater that the Avs are on, especially with Boston’s goalie struggles of late and Francouz on a shutout streak.

It wasn’t long ago that it seemed the books couldn’t set Colorado totals high enough. There was a stretch just after Christmas where the Avs were 7-0-1 to the Over but since then they are 5-0-1 to the Under. The market hasn’t fully corrected to the Avalanche playing some lower-scoring games of late and with a total that has hit 6.5 periodically, we’re leaning to the Under here.

Francouz has been what the doctor ordered for Colorado, as he's given this team the best goaltending it’s seen all season. He hasn’t been confirmed for tonight, but since he’s been the only Colorado goalie to post back-to-back shutouts since Patrick Roy, we’d imagine he gets the nod tonight.

Staying with the speculation angle, we’d like to see Ullmark get the green light for the Bruins. Rask has looked inconsistent which is understandable with the long layover but Ullmark is the better option in net at this point. Before Rask joined the club, Ullmark was 7-1 SU in his previous eight starts.

It is a little fishy when this total won’t commit to the 6.5 despite a pair of teams that are scoring nearly 4.00 goals per game since Christmas. We’re hoping to see another defensive performance from the Avs and the Bruins to get back to what they’re best at.

It’s an Under 6 at even money for us here.

It’s been tough to find any value with the Avs at home this season but -115 on the 3-way moneyline is one of the better prices we've seen. Colorado has been keeping its opponents off the scoreboard of late and Francouz is riding a heater. Conversely, the Bruins have overhauled their goaltending identity since Rask suited up and the results haven’t been great since. Getting a team at -115 to win in regulation while on a 16-game home winning streak is a deal. 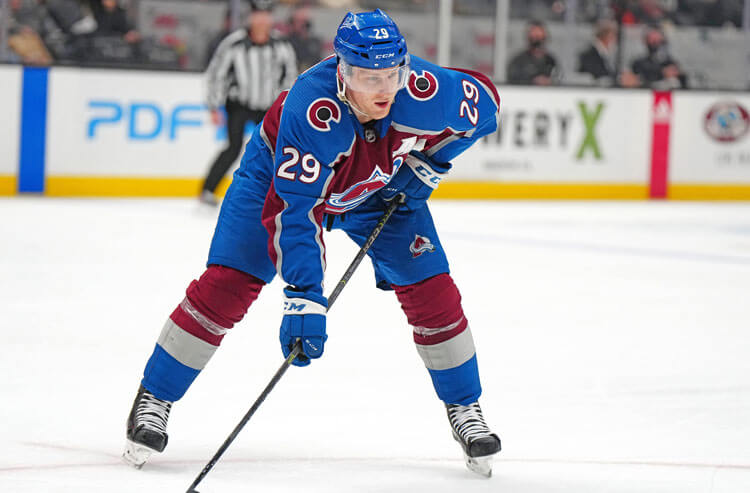 Bruins vs Avalanche Picks and Predictions: No Stopping the Rolling Avalanche
Provided by