Neither the Devils nor Blackhawks are likely to be playoff teams this season, but New Jersey's future looks bright — and so does its chances in its home-opener. Find out if the Devils can capitalize on a weak opponent with our NHL betting picks.

The New Jersey Devils will begin their 2021-22 season at home on Friday night as they host the 0-1 Chicago Blackhawks.

Chicago comes to the Prudential Center after dropping its first game of the season 4-2 to the Stanley Cup-favorite Avalanche and will enter this one as +107 underdogs while New Jersey is the -121 NHL betting favorite.

Here are our free picks and predictions for Blackhawks vs. Devils on October 15.

The Blackhawks are 5-11 in their last 16 meetings vs. the Devils in New Jersey. Find more NHL betting trends for Blackhawks vs. Devils.

The Devils finished last season far, far away from playoff contention and just eight points up from a lifeless Sabres team in the East Division. Though they're unlikely to be a playoff team yet again this season, the future has plenty of reason for optimism.

In Jack Hughes, Nico Hischier, and Yegor Sharangovich, New Jersey has potentially three high-level forwards, as well as a nice complement of depth with players like Miles Wood, Tomas Tatar, and Pavel Zacha. On the backend, new addition Dougie Hamilton will provide the team with a true No. 1 defenseman, a title in New Jersey that has its fair share of history.

Jonathan Bernier was a solid add between the pipes, too. While the lovable veteran is perhaps better suited as a high-level backup at this point in his career, he did finish last season with 0.9 goals saved above expectation in 24 games. His goals against average and save percentage should see a boost this year, too, after moving on from the Red Wings.

There's reason to hope for the Devils, in the long-term, and there is reason in the immediate short-term, too. That's because helping them open their home schedule is the lowly Blackhawks.

Chicago has the ninth-worst odds to make the postseason per MoneyPuck and its areas of concern did little to inspire confidence vs. Colorado. Marc-Andre Fleury struggled in his debut in net for the Blackhawks, allowing four goals on 36 shots and finishing with -0.4 goals saved above expectation. Their weak defense, supposedly aided by the big-money addition of Seth Jones, didn't play well and Jones — hardly an analytics darling — finished as a -2 in just over 28 minutes of ice time.

Chicago's forwards offer a lot of reason for optimism and its Top 3 forward lines may yet prove to be capable of stealing games but we can't back a team with suspect defending and goaltending on the road.

The Blackhawks finished last season with the third-lowest expected goals for, despite being middle-of-the-league in goals scored. The addition of Tyler Johnson plus the returns of Jonathan Toews and Erik Gustafsson offer some reason to expect better numbers this season but all three come with some serious caveats.

Johnson is coming off back-to-back middling seasons with the Lightning and could easily underwhelm as a Top 6 center in Chicago. It remains to be seen how Toews, who played just over 17 minutes in the opener, will return from a year away from the game. And Gustafsson, returning after a nomadic couple of seasons, may simply be a third pair d-man without any minutes on the power play.

The Devils, meanwhile, finished eighth in expected goals last season and should only have their production increase as their young forwards continue to grow. Preseason results of course come with a grain of salt but the offense spread the wealth in five tune-up contests, with 15 different players scoring as New Jersey averaged four goals per game.

Similar to the moneyline, it's difficult to count on Chicago at all right now until it shows us something worth counting on. New Jersey will find the back of the net a few times on Friday night but the Blackhawks don't give us enough to take the Over. 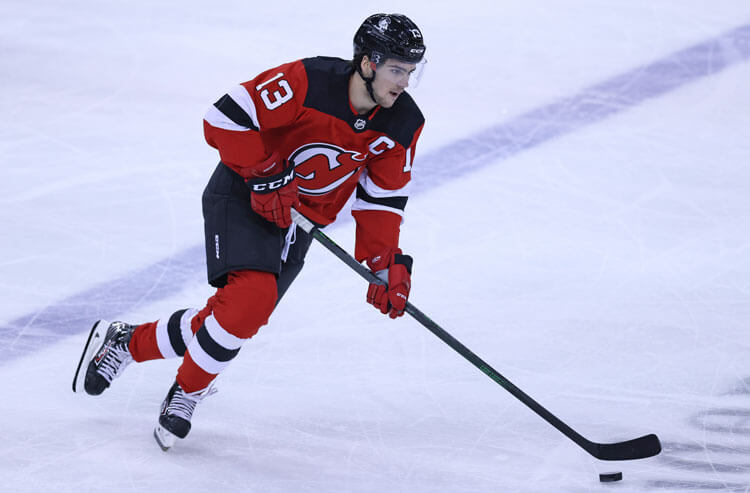 Blackhawks vs Devils Picks and Predictions: New Jersey Gets Favorable Home-Opener
Provided by

Oilers vs Golden Knights Picks and Predictions: Bank on the Over Again, Even If It Hits 6.5
Josh Inglis | Nov 26, 2021

Rangers vs Bruins Picks and Predictions: NYR's Depth, Goaltending the Keys to Victory in Boston
Josh Inglis | Nov 24, 2021
About Us
Contact Us
Careers
Our Team
Brand
Testimonials