Tom Brady Next Team Odds: Will the GOAT Unretire?

Tom Brady has said goodbye to the NFL for the second time in as many years. Will the 45-year-old QB keep his word this time, or could we see him on the field again?

UPDATE: Football fans woke up to the sight of a tearful Tom Brady this morning as the seven-time Super Bowl champion announced that he was hanging up his cleats... again.

Brady's latest retirement announcement comes one year to the day after he first bid adieu to the sport he loves on February 1, 2022. However, not everyone is convinced he can stay away from the game. Within moments of publishing his tweet a multitude of sportsbooks began offering odds on whether TB12 will remain on the sidelines.

Below is our anaylsis of Brady's next team odds prior to today's announcement:

A season of turmoil for the Tampa Bay Buccaneers and Tom Brady came to a merciful end on Wild Card weekend, as the Cowboys dismissed the Bucs with ease in a 31-14 rout.

The loss to Dallas not only put an end to Tampa Bay's season but potentially Brady's time in the city, too. The GOAT is set to hit free agency for the second time in his storied career in March and with the Bucs far from convincing throughout the 2022 season, Brady could look elsewhere — though NFL odds suggest a return to Tampa is most likely.

There's never a shortage of quarterback-hungry teams, and certainly not when that quarterback is Tom Brady. Check out the full odds for his next team and a handful of potential suitors below.

Looking to do some NFL betting? Here are two of the best bonuses* available:

Tampa opens in the driver's seat, at least according to oddsmakers, but there's plenty working against it.

On offense, for as inviting as the infrastructure was in the early part of Brady's Bucs tenure, it's considerably less so now. Mike Evans appeared to be a shell of himself for most of '22, Chris Godwin spent the season rounding back into pre-injury form, and the offensive line was decimated by injuries.

Compound the meh surroundings with the expected dismissal of OC Byron Leftwich, whom Brady was close with, and it's easy to see him being underwhelmed by the promising rookie seasons of Cade Otton and Rachaad White.

The partnership with a defensive — and naturally conservative — head coach in Todd Bowles is certainly worth examining, too. Not only has Bowles proven nothing in the main chair in five seasons, between the Jets and Bucs, but his defense folded down the stretch, too, finishing 25th in weighted DVOA.

Now we're talking. Any one player to the Raiders hasn't made this much sense since, well, the last time a draft-eligible wideout ran a sub-4.4 forty under Al Davis's ownership.

Vegas is set to have a vacancy under center, after its unceremonious divorce with long-time starter Derek Carr. However, that's a small breadcrumb compared to the blindingly obvious connection to Josh McDaniels. The Raiders' head coach and Brady spent 15 years together in New England, winning six Super Bowls, and McDaniels brought a significant amount of former Pats personnel with him.

From a team perspective, there's a lot to like about this fit, too. The warm weather and domed stadium would do wonders for a 46-year-old quarterback, especially ducking the colder months, and Brady wouldn't be short on weapons.

It's worth mentioning, too, that this marriage may have happened a couple of years ago, if it wasn't for Jon Gruden's impossibly large ego.

After falling in love with football in the seats of Candlestick watching Joe Montana's 49ers, a curtain call in Brady's native Northern California has always felt like a vague possibility (especially when John Lynch called to inquire about a trade years ago). The fantastic situation for any quarterback in San Fran, obviously, doesn't hurt.

What does hurt, however, is the litany of options in front of the 49ers' brain trust. There's the unknown of Trey Lance, Jimmy Garoppolo's uncertain future, and whatever the heck Brock Purdy is, exactly, to contend with. Brady's ability and career speaks for itself but this spot feels more player- than team-driven.

Hey Tom, you know how over the last three seasons, you've come to learn there's more to the NFL than playing under Bill Belichick and in New England, and how you can win separately from Belichick? Want to run it back in a pretty unappealing situation, for nostalgia's sake? No? OK.

Other than the hopes and dreams of the Commonwealth of Massachusetts, it's difficult to understand why Brady would make this move — or whether either of he or Belichick would be open to it.

New England got to enjoy a once-in-a-lifetime fan experience over two decades and now it's time to take your medicine. Plug your nose and get ready for Mac Jones or Bailey Zappe in 2023.

The optics of Brady to Miami would be hideous but Stephen Ross has never been one for external opinion. It seems impossible that, with the Dolphins without their first-round pick this year due to a tampering investigation involving Brady, they would then land him but stranger things have happened.

As it stands, one would have to assume both Mike McDaniel and Tua Tagovailoa would be out of Miami in the event of Brady's arrival. So far, we've received no indication either move looms, but again, let's not try to get a read on Ross.

Not for nothing, the on-field situation would surely appeal to Brady. Not only would he have an elite 1-2 at receiver in Tyreek Hill and Jaylen Waddle, but also one of the league's best left tackles in Terron Armstead. 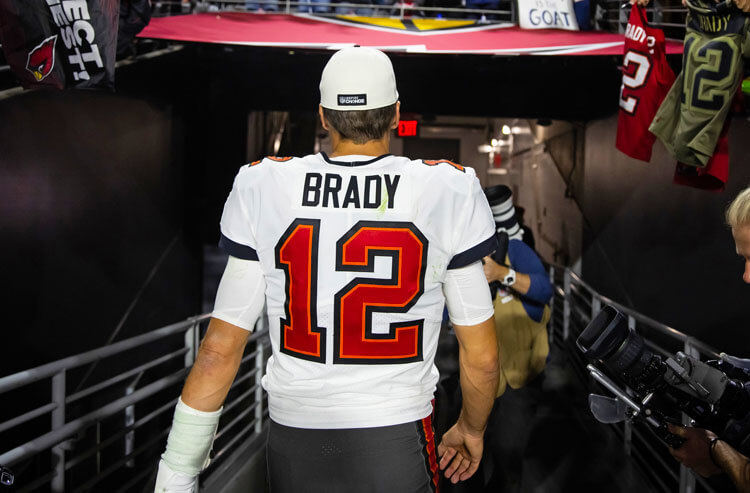 Tom Brady Next Team Odds: Will the GOAT Unretire?
Provided by