The Pittsburgh Steelers face the New York Giants during the first Monday Night Football matchup of the 2020 season. **video

The Steelers are coming off an 8-8 season which was derailed in Week 2 when franchise quarterback Ben Roethlisberger suffered a season-ending injury. The Giants went 4-12 during a rebuilding year in 2020 with rookie QB Daniel Jones taking over for longtime (and now retired) signal-caller Eli Manning.

NFL betting odds have the Steelers as 6-point road favorites in Week 1 with the Over/Under installed at 47.5. Here are our best NFL free picks and predictions for the Steelers vs. Giants on September 14.

It's expected to be clear weather at Metlife Stadium on Monday night with temperatures in the 70's and a 10 percent chance of rain. Winds will reach up to 13 mph. Be sure to monitor the gametime conditions with our NFL weather info.

The Giants are 1-10 ATS in their last 11 games as an underdog at home. Find more NFL betting trends for Steelers vs. Giants.

Both teams have question marks on offense. Can Roethlisberger still air it out at the age of 38 following elbow surgery? And how improved will Jones be in his second season, behind a sketchy offensive line and with receiving targets that can't seem to stay healthy?

The big difference will be on the defensive side of the ball. After trading for safety Minkah Fitzpatrick, the Steelers emerged as one of the top stop-units in the NFL, finishing fifth in the league in scoring defense at 18.9 points per game.

The Giants, on the other hand, ranked 30th in the league by surrendering 28.2 ppg. Expect Pittsburgh's ferocious pass rush to harass Jones all night and take the Steelers on the spread.

The Over/Under is difficult to handicap here for several reasons: as we said the offenses are hard to figure out, while one team has a very good defense and the other seems to think they are playing flag football. The trends don't help either, with the Steelers 7-1 to the Under in their last eight games and the G-Men 6-0 to the Over in their previous six contests on turf.

In the end, we decided to lean with the offense. Prior to his injury, Roethlisberger set career highs in passing yards (5,129) and touchdowns (34) in 2018, and according to early reports from The Athletic's Mark Kaboly he has "made every throw" at Steelers camp and his elbow is "not a concern."

As for the Giants, the Steelers pass rush might force them to look for shorter options. That could mean more handoffs and outlet throws to Saquon Barkley, and putting the ball in the hands of their most dangerous player isn't the worst idea.

The Giants pass rush is below average and their secondary might be the worst in the league. Last year the G-Men ranked 28th in the league in passing yards allowed and 29th in yards per attempt allowed.

To be fair, the G-Men know their secondary is an Achilles' heel and have tried to address it. They traded into the first round for cornerback Deandre Baker last year after already giving up their third-rounder for Sam Beal in the supplemental draft in 2018. And this April they drafted safety Xavier McKinney early in the second round.

Unfortunately for New York, McKinney is on the IR after breaking a bone in his foot, Beal has opted out due to COVID-19 concerns and Baker was waived after being charged with armed robbery.

Pittsburgh Wide receiver Ju-Ju Smith Schuster should be excited to be catching passes from Roethlisberger again after a disappointing season in 2019 and Eric Ebron gives the Steelers their best receiving option at tight end in years. If you think Roethlisberger will return to his pre-injury form, you've got to like Pittsburgh's chances of going Over their team total. 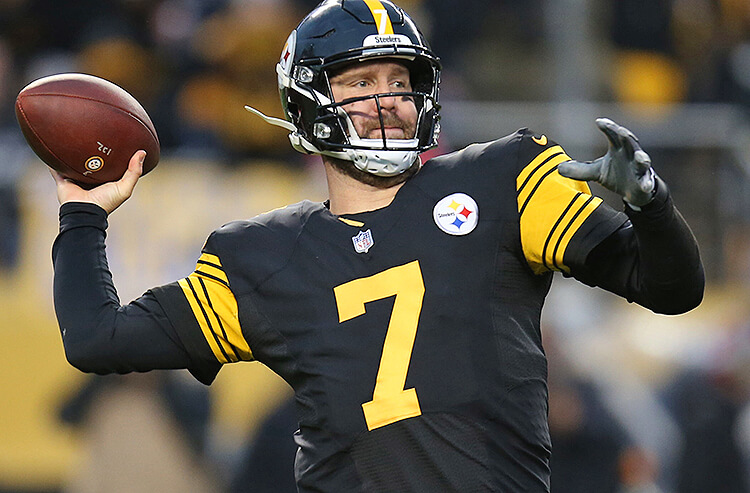