Dallas Cowboys running back Ezekiel Elliott has yet to find the end zone, nor does he get much action in the passing game, but he's still very good at running the ball — so we're looking at Zeke to grind the G-Men on the ground on Monday Night Football.

An NFC East rivalry takes center stage in Week 3 as the Dallas Cowboys collide with the New York Giants on Monday Night Football.

The Giants are tepid home favorites in a game with one of the lowest listed totals of the season. While the points are not expected to pile up in this one, that doesn’t mean there aren’t any good NFL player props to take advantage of.

We’ll shine a light on Cowboys running back Ezekiel Elliott and discuss his chances of clearing his rushing total and receiving total, as well as the likelihood that he’ll tally a touchdown.

B) Ezekiel Elliott and Tony Pollard to each score a TD BOOSTED to +800 at Caesars! Bet Now

Zeke out a score

Bettors shouldn’t wager on things simply because they feel "due," but this is a great price being offered on Elliott to score his first touchdown of 2022 — and there’s evidence to suggest it’s a smart play too.

Elliott tallied 12 touchdowns over the course of 17 games last season, or 0.71 touchdowns per tilt. That’s just about in line with his career number of 0.76 touchdowns per game (68 touchdowns in 90 tilts). The implied odds of +155 equate to a 39% chance that Elliott will cross the goal line in this one, and that seems very generous in this spot.

Not only has Elliott not scored a touchdown through two games, but the Giants have also not allowed a rushing touchdown. However, they were a modest run-stopping unit in 2021 in that regard, as New York gave up 15 scores on the ground (0.88 per game) last season.

It’s been a fairly productive campaign for Zeke so far, and he has the potential for a season-high in rushing Monday night.

Elliott ran for 52 yards on 10 carries in Week 1 against a Tampa Bay Buccaneers defense that’s been exceptionally tough to pierce on the ground over the last few years. He might have had more carries too if his team didn’t fall behind early.

In Week 2, Elliott only got to 53 yards on 15 carries against the Cincinnati Bengals’ run stoppers... but facing the Giants offers hope for a breakthrough.

New York has surrendered an average of 119.5 yards per game on the ground through two games this year, and was a modest run-stopping unit in 2021 — yielding 129 rushing yards per game last season.

The former Ohio State Buckeye has made a habit out of torching the Big Blue stoppers in his career, rushing for 827 yards on 191 carries (4.33 yards per rush) and eight touchdowns over the span of 10 head-to-head meetings.

Running back Tony Pollard has become a more regular feature of the Cowboys’ offense, particularly as a weapon in the passing game.

That’s taken away opportunities for Elliott, who should not get to double-digit receiving yards on Monday night. Elliott has been targeted only four times through two games, recording two catches for a grand total of -7 yards.

And no, that is not a typo.

His production as a receiver began to falter at the tail-end of last year, as he averaged only 9.83 yards per game over his team’s final six contests and Elliott hauled in just seven of 19 passes aimed at him in that span. 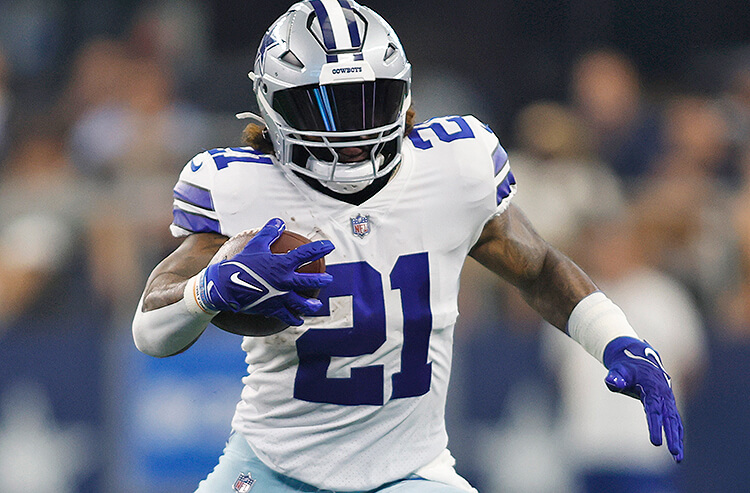