The Dallas Cowboys look to put on a show in Tinsel Town when they visit the Los Angeles Rams for Week 1 of the 2020 NFL season on Sunday Night Football.

The NFL betting odds opened with Dallas as a 2-point road favorite in the spring and instant action on the Cowboys pushed the spread to a field goal, where the line has remained steady – outside of adjustments to the vig. With this being the final game on Sunday’s slate, expect some late line movement.

Here are our NFL free picks and predictions for Cowboys vs. Rams on September 13. **video

The game will be played indoors at the brand-new SoFi Stadium. Be sure to monitor all gametime conditions with our NFL weather info.

The Rams are 0-7-1 ATS in their last eight games as home underdogs. Find more NFL betting trends for Cowboys vs. Rams.

Despite the overhaul in Dallas’ coaching staff, new head coach Mike McCarthy kept on offensive wunderkind Kellen Moore to call the plays, with guys like QB Dak Prescott, RB Ezekiel Elliott, and WR Amari Cooper giving opposing DC’s the night sweats. That familiarity will have the Cowboys ahead of the game early in the schedule.

Another edge the Cowboys hold in this Week 1 matchup is new special teams coach John Fassel. Not only does “Bones” bring stability to a shaky unit but he also comes with plenty of inside intel on L.A. — he served under Sean McVay for the past three seasons and is one of three new Dallas coaches that was employed by the Rams last year.

The current line has Dallas -3 (+105) at some books, indicating a potential move back to Cowboys -2.5. If you want to wait and see if you get the half-point back, go for it. But know the public will likely be pounding America’s Team come Sunday night, so don’t wait too long.

Los Angeles has a new defensive coordinator in Brandon Staley, so expect some growing pains with limited camp reps and zero preseason practice. But the Rams still have Aaron Donald and the Cowboys offensive line is not as formidable as it once was.

Tyron Smith and Zack Martin are still the pillars of the protection, but star center Travis Fredrick called it a career and tackle La’el Collins is on the IR, leaving Dallas to scramble for help on the right side.

As well, the Cowboys brought in Mike Nolan as the new DC and they a very special front seven to work with. Dallas will keep offenses guessing with multiple formations, which allows the likes of DeMarcus Lawrence, Aldon Smith and Everson Griffen to exploit mismatches and disrupt rival QBs.

The effectiveness of the Rams’ O-line is a mystery and McVay could go run-heavy with a committee of RBs to take the pressure off QB Jared Goff.

Jason Witten’s victory lap in 2019 was fun for Cowboys fans but not for fellow TE Blake Jarwin.

While Jarwin reeled in spectacular catches and made big plays on key downs, totaling 31 receptions for 365 yards and three touchdowns, he watched Witten vulture the red-zone reps. Jarwin was thrown to once inside the 20-yard line all season (ONCE!) and that was a one-yard gain for a touchdown.

Jarwin is now the top tight end on a stacked Dallas offense in 2020, and with the Rams secondary scrambling to keep track of the Cowboys’ talented trio of receivers and the L.A. linebacker corps nursing injuries, Jarwin is ready for his primetime coming-out party. 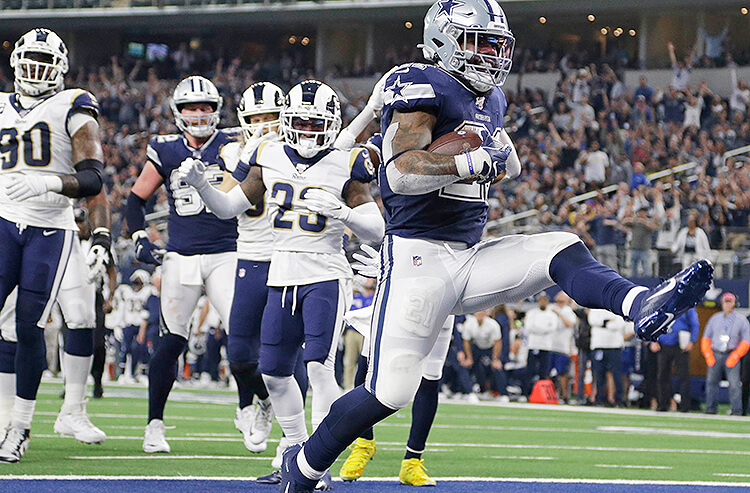 Cowboys vs Rams Week 1 picks and predictions
Provided by