Our college football parlay picks are targeting some high-profile matchups this weekend, and the Clemson-NC State total looks suspiciously low. See why D.J. Uiagalelei & Co. can topple this number in Week 5.

Conference play is now in full swing, and that will be our focus as we try to come up with winning parlays for this weekend’s college football slate.

Both the Big Ten and the ACC feature matchups that could have implications down the line on conference title games and even the College Football Playoff race. Let’s find some value with our best college football parlay picks for Week 5.

Two of the best defenses in college football will collide on Saturday when the Michigan Wolverines visit the Iowa Hawkeyes. While neither team has played much of a schedule yet, both have shown absolute dominance on the defensive side of the ball. Michigan has allowed just 11 points per game, while Iowa has been even better, leading the country with just 5.8 points allowed per contest.

There’s one major and obvious difference between these teams: The No. 4 Wolverines are also second in the country on offense, scoring 50 points per game. The Hawkeyes, on the other hand, have been unable to mount much of anything with the ball, having scored a total of 68 points in four games. Iowa is averaging a paltry 233 yards a game on offense, and that number will be difficult to improve against Michigan.

In other words, Michigan should win this game. Even against a stout Iowa defense, Wolverines running back Blake Corum should find some success after busting out for nine touchdowns and 478 yards in his first four games. The Hawkeyes don’t have a similar explosive weapon that can threaten Michigan over the course of the game.

Still, 10.5 points is way too much. The Maryland Terrapins managed to slow the Michigan offense last week, and the Hawkeyes defense is on a completely different level. In fact, Iowa hasn’t allowed more than 10 points in a single game this year. The Wolverines will beat that number, but they won’t cover the spread.

Both the Michigan State Spartans and the Maryland Terrapins suffered Big Ten losses last week, as Maryland came up just short in a 34-27 loss to Michigan, while the Minnesota Golden Gophers blew out the Spartans 34-7.

The Spartans have now lost two straight games, albeit against strong competition in the form of Minnesota and the Washington Huskies. While the Golden Gophers may have humbled Michigan State, the Spartans have otherwise been able to move the ball on offense behind a strong offensive line. Quarterback Payton Thorne has been able to throw for seven touchdowns and 900 yards on the season, though he’ll have to improve on the six interceptions he’s tossed in his first four games.

Maryland quarterback Taulia Tagovailoa has thrown for seven touchdowns of his own on 1,102 yards. The Terrapins have been dynamic in the air, averaging 301 yards of passing per game. That lines up well against a Michigan State defense that allowed 265.3 yards a game though the air.

But so far, the Spartans have successfully employed a bend-but-don’t-break defense, allowing just 21.5 points per game. Michigan State should also benefit from a step down in competition, especially with Tagovailoa banged up and still uncertain for Saturday’s game. As long as we can get that key number of 7.5 points, the Spartans are the smart play here.

One of the best games of the Week 5 slate sees the No. 22 Wake Forest Demon Deacons visit the No. 23 Florida State Seminoles. Wake Forest is coming off a heartbreaking overtime loss to the Clemson Tigers, while Florida State remains undefeated after a 44-14 win over the Boston College Eagles.

The Seminoles needed a decisive win after two tight victories over the LSU Tigers and the Louisville Cardinals in the past two weeks. Jordan Travis has been one of the best quarterbacks in college football this year, throwing for five touchdowns and just one interception. ESPN’s QBR rates him as the No. 8 quarterback in the country, while Pro Football Focus likes him even better, grading him as the No. 4 signal-caller.

The one thing Florida State hasn’t had to do yet is win a shootout against an equally talented offense. Wake Forest is averaging 42.8 points per game, and has done so against stiffer competition than the Seminoles. Nobody has held the Demon Deacons to less than 37 points this year, with even a strong Clemson unit giving up 38 points to Wake Forest in regulation.

Wake Forest will score against Florida State, and the Seminoles will respond in kind. But I have more confidence in the Demon Deacons when it comes to a shootout scenario. A Wake Forest win would be a minor upset, but not one that justifies a number over +200 like we’re getting here.

There are a couple of high-profile games on Saturday with very low totals. In the case of Michigan vs. Iowa, the number makes sense. On the other hand, I think the North Carolina State Wolfpack and the Clemson Tigers will easily exceed their total of 43.

Yes, these two teams can play defense. NC State is allowing just 11.8 points per game on the season, and Clemson has been solid as well, giving up an average of 21.8 points.

But it’s not as though either team has been struggling to score. The Tigers are putting up 43.8 points per game behind D.J. Uiagalelei, who has already thrown for 10 touchdown passes this year. NC State has been less explosive, but junior quarterback Devin Leary has thrown for nine touchdowns himself. The Wolfpack have scored 36 points per game on the year, hardly a number that justifies this low total.

Remember, Clemson scored 51 points (and 38 in regulation) last week alone, and its defense hasn’t exactly shut down the opposition. The Louisiana Tech Bulldogs put up 20 against the Tigers just one week earlier. Hurricane Ian doesn’t look like it will be a factor by Saturday night, so there’s no reason to doubt this game will go well past the Over. 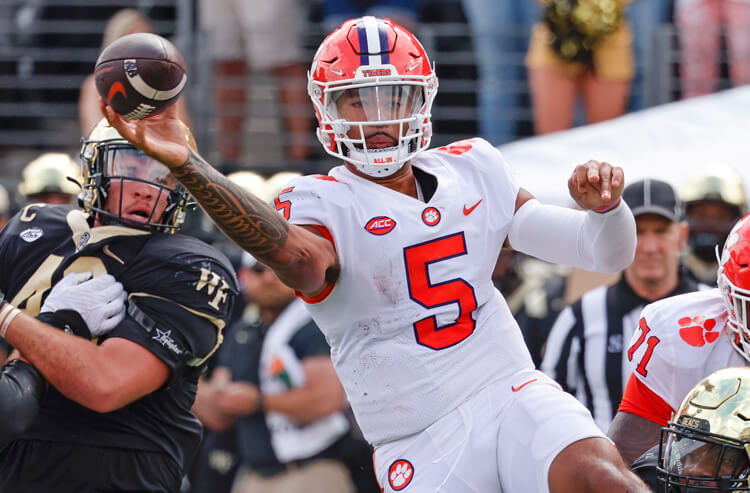