Oklahoma hasn't been able to put together thorough showings on a consistent basis, but still undefeated, the Sooners need things to click fast. Will that lead to a cover against Texas Tech? Find out with our college football betting picks.

The Oklahoma Sooners are currently atop the Big 12 standings and will be aiming to remain undefeated when they host the Texas Tech Red Raiders, who fired head coach Matt Wells earlier this week.

The college football betting odds have the Sooners favored by nearly three touchdowns in this matchup, but will it turn into a blowout with the Red Raiders dealing with some disfunction? Keep reading our Texas Tech vs. Oklahoma picks and predictions to find out.

This game opened with the Red Raiders as 19-point underdogs, but Texas Tech is now getting anywhere from 18.5 to 20 points here. There’s a slight public lean to the Red Raiders, but nothing significant. As for the total, it’s gone from 68.0 at open down to as low as 66.5. It can, however, be found anywhere in between.

The Sooners are 9-4 against the spread in their last 13 games following a straight up win. Find more NCAA betting trends for Texas Tech vs. Oklahoma.

Last week, Oklahoma went into Lawrence and earned a 35-23 victory over the Kansas Jayhawks as 38-point road favorites. The Sooners really underperformed in that game and it’s somewhat understandable to overlook a bad team from time to time. However, Oklahoma does it far too often and head coach Lincoln Riley is going to make sure that his team buttons it up in the home stretch of this season. The Sooners are undefeated and have everything left to play for, so they need to start going out and handling their business on a weekly basis.

This game against the Red Raiders really should be somewhat straightforward for the Sooners. Texas Tech has not been good against the run this season, as the Red Raiders have had two games in which they have given up more than 300 rushing yards. Look for Oklahoma to exploit that in this one, as both Kennedy Brooks and Eric Gray should be able to shred this defense on the ground. If the Sooners are dominating with the run, that will make life on Caleb Williams a lot easier as a quarterback. And Williams can also run it himself, which is part of the reason this is such a bad matchup for Texas Tech.

Overall, it’s hard to imagine the Red Raiders getting enough stops in this game to ultimately cover, and Texas Tech doesn’t exactly have the right tools to pick apart an up-and-down Oklahoma defense. The Sooners are very talented along the defensive line, so they should be able to stifle the Red Raiders rushing attack. That would put a lot of pressure on Henry Colombi, who isn’t exactly a great passer. Oklahoma doesn’t have a good secondary this season, so Colombi should have a couple of successful drives throwing the ball. However, it won’t be enough to keep this game within reach for Texas Tech bettors.

Texas Tech comes into this one after having played three games that went Under the total in its last four contests. Meanwhile, Oklahoma surprisingly played a game that went Under against Kansas last week. The fact of the matter here is that the total is set rather high for these two teams, and it’s entirely possible that the Red Raiders won’t score enough to help this Over cash.

Sonny Cumbie is now the head coach for Texas Tech, but he was previously the offensive coordinator. With that in mind, things shouldn’t change too much for the Red Raiders offense. Oklahoma should be able to hold Texas Tech to 21 or fewer, and that would give the Sooners a chance to cover by scoring 42 or 45.

Also, with Riley as the team’s head coach, the Under is 3-2 in the five games in which Oklahoma was favored by 17.5 to 21 points at home. 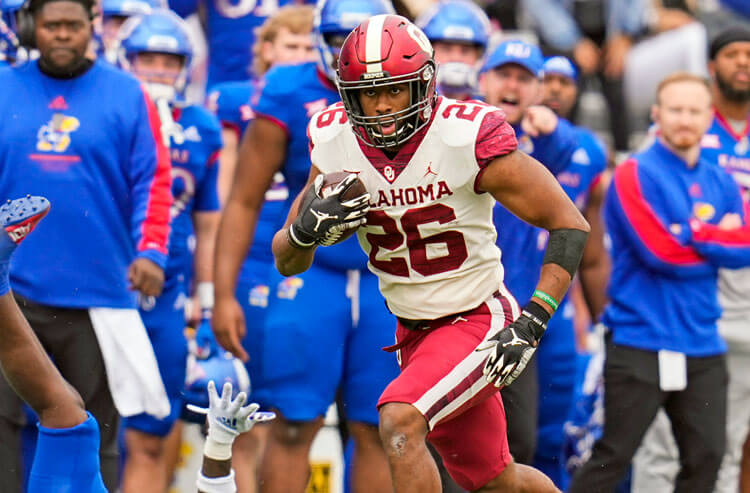 Texas Tech vs Oklahoma Picks and Predictions: Red Raiders Run Over
Provided by