The Bulldogs look to stay on top of College Football when they face the Horned Frogs at SoFi Stadium on Monday night. Read more to see our full breakdown and analysis in our TCU vs. Georgia betting picks. 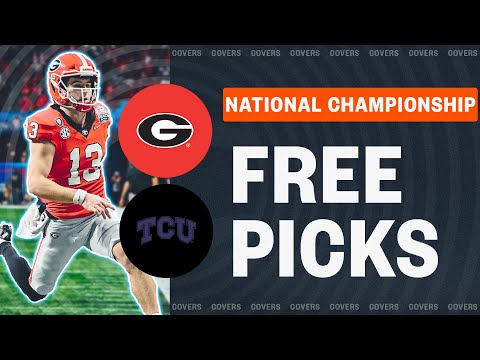 It’s the College Football Playoff National Championship matchup that no one outside of Forth Worth could have imagined.

The reigning champions and No. 1 ranked Georgia Bulldogs did their job this season. They enter the national title game with a perfect 14-0 record but needed an epic comeback to defeat Ohio State 42-41 in the Peach Bowl semifinals.

Meanwhile, no one — and I mean no one — expected the No. 4 ranked TCU Horned Frogs to be here. The perfectly nicknamed Hypno Toads were +15,000 to win in our National Championship odds before the season, and even though they qualified for the CFP, the Frogs were 8-point underdogs against Michigan in the Fiesta Bowl. Despite a furious late push by the Wolverines, TCU held on for a thrilling 51-45 victory.

Once again, the numbers say the Horned Frogs don’t have a chance, as they are nearly two-touchdown underdogs vs. the Dawgs.

However, TCU has been one of the best bets in college football all season. Is taking the points with the Hypno Toads a no-brainer, or does the magic end as the Dawgs dominate their way to a second consecutive national title?

I break it all down and bring you my best bet for the national championship game in our free college football picks and predictions for TCU vs. Georgia on January 9. You can also check out our National Championship X-Factors.

TCU vs Georgia picks and predictions

Georgia survived a scare from Ohio State, but this team certainly deserves this shot to defend its national title.

The Bulldogs have won 16 consecutive games dating back to last season, which was made all the more impressive considering 15 players from last year’s team were selected in the NFL Draft — including eight from an all-time great defense.

Yet, the defense was still dominant. Led by another potential top draft pick in defensive lineman Jalen Carter, the team ranked 17th in opponent yards per play and second in scoring defense, giving up just 12.8 points per game.

That said, quarterback Stetson Bennett remains the heart and soul of this Bulldogs team. Bennett, a Heisman finalist this season, didn’t play his best in the Peach Bowl, as head coach Kirby Smart was quick to point out immediately after the game. And yet, Bennett still threw for 398 yards and three touchdowns.

Bennett has a habit of putting up his biggest numbers in the biggest games. Over two SEC championship games and three College Football Playoff games, he has thrown for 1,549 yards (309.8/game) with 15 TDs and three picks.

He’s going to have a great chance to put up some more numbers against this TCU unit. The Horned Frogs play an aggressive, ball-hawking defense which we saw create two pick-sixes in the matchup against Michigan.

But that style of play comes at a cost. TCU has a propensity for giving up the big play through the air. The Horned Frogs ranked 83rd in passing yards allowed per game, but more stunningly, they have allowed the sixth most passing plays of 20 yards or more in the entire country. That ranks 125th out of 131 FBS teams.

So, in a game with a spread that is difficult to handicap, my best bet will be for Bennett to go Over his passing yard prop of 275.5. Aside from the numbers above, the other reason to like this bet is there seem to be multiple avenues for Bennett to get there.

TCU could continue to do what it has done all season, which is shock everyone and keep this game close, forcing Bennett to keep making plays until the bitter end. Even though I have a lot of faith in the Georgia defense, Max Duggan, Quentin Johnston, and the Horned Frogs' offense is good enough to put up some points in this game.

There's also the scenario where Bennett takes advantage of a suspect TCU secondary and lets it fly early and often, as he did in the SEC Championship against LSU or in last year’s Orange Bowl CFP semifinals.

In a matchup where I don’t have a strong feeling about the spread, I’m much more confident in Bennett’s ability to move the ball through the air against this TCU team and go over a number he’s eclipsed twice in three career College Football Playoff games.

Looking to bet on some Bowl season action? Here are two of the best bonuses* available:

B) Get a 50% profit boost on any live (in-game) bet for tonight's game at Unibet! Bet Now

When I saw the opening line for the College Football Playoff national championship game hit the board at 13.5, my gut reaction was, “sportsbooks are begging for everyone to take TCU.” That’s exactly what happened early on as the line has moved from Georgia -13.5 down to -12.5.

As of Thursday afternoon, a whopping 78% of the public at our Covers Consensus page is taking the points with the Horned Frogs, and I get it.

It has been an absolutely magical year for TCU, as the Horned Frogs weren’t even ranked before the season. They were once as long as 200/1 to win the national title and were even picked to finish seventh in their own conference on media day.

But with veteran quarterback Max Duggan under center and some NFL-caliber skill-position players, the Horned Frogs knocked off win, after win, after win. Only Tulane has covered more spreads than TCU has this season.

Even heading into the Fiesta Bowl against Michigan, people weren’t believers in the Horned Frogs. That’s likely due to their several second-half comebacks, many of which came against backup quarterbacks.

Yet, the Hypno Toads deserve to be here, as their wins over Texas, Baylor, and the Wolverines were all impressive.

The way TCU pulls off an upset is by hitting some big plays in the passing game while still mixing in a good amount of runs. They also need to create some turnovers, and if not pick-sixes, they need to score off any turnovers they create.

However, there is still a reason why Georgia is nearly a two-TD favorite in this game. While TCU has some really great players and some guys who will go on to the NFL, the level of talent on the two rosters just doesn’t compare.

While you can argue Michigan has as much talent as Georgia, the Wolverines did a poor job of tackling in that game, and the talented TCU skill position players took advantage. Georgia is maybe the best team in the country at tackling. And it’s not just individual tackling, they swarm to the football.

It's also important to note that despite the Horned Frogs' strong play in the Fiesta Bowl, they needed two pick-sixes in a game won by just five points.

On the other side, one of Georgia’s issues in the Peach Bowl was that they were unable to consistently get pressure up the middle. The Buckeyes' excellent tackles were left one-on-one on the outside and were able to spend much of the game double-teaming Jalen Carter. It will be interesting to see if the less-talented TCU tackles can get away with that strategy.

As I’ve said. I think this is a difficult game to handicap. My heart says Hypno Toads, but my brain says Bulldogs. Georgia played one of its worst games of the season in the Peach Bowl, while Ohio State played one of its best.

The Dawgs still managed to prevail in that one, so I'm leaning toward laying the chalk with Georgia. If you do like the Bulldogs, take them now. I think some sharp money could drive this closer to two TDs as kickoff approaches.

The total for the national championship hit the board at 62 and has been bet up to 62.5, with some 63 starting to pop up at some books as well. That number makes sense, considering how good both offenses can be.

But to get straight to the point, I’m staying away from the total in this game. I just see the variance in outcomes of the final score being too wide for me to be comfortable taking a side on the O/U.

I can see a scenario where Georgia dominates somewhat like the way they did against Oregon in the season opener. The Bulldogs won that game 49-3 and went Under this number.

And at the same time, I wouldn’t be shocked at all if TCU did what it has done all season, and surprise everyone and keep this game close thanks to their impressive offense and end up with a result similar to both semifinals, which both went Over.

Bennett will have a chance to move the ball through the air against a suspect TCU secondary. He’s gone over this number in half of his 14 games this season and tends to show up for the biggest games. He’s also thrown at least two TD passes in seven of his last eight games and in all three of his career CFP games.

On the other side of the ball, I think TCU will see how CJ Stroud found success moving around the pocket, and Duggan will be more likely to tuck it and run. Additionally, I do believe Georgia will win its second straight national championship, so I like adding it to this parlay.

Learn how to bet a same-game parlay with these helpful tips and strategies. 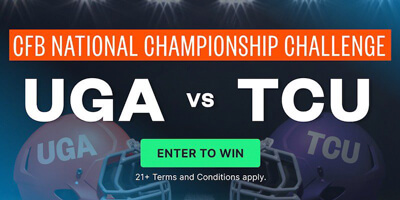