The Pac-12 should be highly competitive in 2021 — because every favorite has a major question mark. But where does the betting value lie in the Power 5 conference that annually gets the least respect? Well, we think the conference is going to the dogs.

Ah, the three certainties in life: Death, taxes, and the Pac-12 being left out of the College Football Playoff. Oregon played for the national title in the first-ever CFP back in 2015, but since then the Pac-12 has only sent one entrant to the playoff.

But is 2021 the year we give some respect back to the Pac-12? In the South Division, USC is once again loaded with talent and has a favorable schedule. While in the North Oregon and Washington will be strong contenders. Can the Pac-12 return to the promised land?

The biggest problems for the Pac-12 might be competition and the fact there is no clear-cut favorite. One may emerge but it’s hard to tell who at this point. Heck, the five highest favorites in the conference have a win total of between 8.5 and 9.0.

Oregon is the betting favorite to win the Pac-12 this season at +250. Mario Cristobal’s Ducks have plenty of talent, starting with potential No. 1-overall NFL draft pick Kayvon Thibodeaux, and whoever is under center will have plenty of weapons... but Oregon has a tough schedule.

But the biggest question every year in the Pac-12 is whether this is the season USC is back? The Trojans are the third favorite to win the conference +400 but head coach Clay Helton would be lying if he said his seat wasn’t warm. That said, he has a veteran QB in Kedon Slovis and a favorable schedule — but the defense will need to be better if they want to be serious CFP contenders.

Additionally, Washington could be the class of the conference, Arizona State could make some noise (if the NCAA doesn’t crush them with sanctions first), and never overlook Utah.

This was the year everything was supposed to fall in place for Arizona State. It is Year Four of the Herman Edwards era and his team has the talent to win the Pac-12... but now the dark cloud of NCAA sanctions lay over the team.

The Sun Devils reportedly brought in and met with recruits during the NCAA’s “dead period” and are now being investigated. At this point, we don’t know what the repercussions will be but it was enough for me not to pick Arizona State as my value play to win the conference. That said, I am still too tempted by this team’s talent, specifically quarterback Jayden Daniels.

The junior QB is a true dual-threat QB and could be one of the best in the nation if he can be a little more consistent. Daniels has thrown for 22 touchdowns against just three interceptions, while adding and seven scores on the ground, in his college career to date. He has plenty of weapons at the skill positions and returns four of five starters on the offensive line. And while it was a small sample size with just four games, the Sun Devils led the conference in scoring and yards per play in 2020: The ceiling for this offense is very high.

Oh, and while the offense has a chance to flourish, it's the defense that led the Pac-12 in scoring defense (23.3 ppg) and returns 10 starters.

While the future of this team is a little murky, the talent is there and could be a better bet than most this season.

This looks like a make-or-break year for the Trojans and head coach Clay Helton. Anything other than a conference championship will be a disappointment for USC.

And those championship hopes rest on the throwing arm of QB Kedon Slovis. The junior signal-caller threw for nearly 2,000 yards in just six games last season and has tossed 45 touchdowns to just 16 interceptions over his two years at USC.

He will be missing his top two receivers from last year, but the program brought in transfers Tahj Washington from Memphis and KD Nixon from Colorado to pair with Drake London. The Trojans’ offense could be really scary if Graham Harrell starts implementing more handoffs in his game plan and picking up Keaontay Ingram from Texas could give the run game the boost it needs.

But what could make the Trojans a great Over bet is combining that offense with a defense that still has some holes to fill. The defense improved last year under first-year defensive coordinator Todd Orlando but the secondary has to replace two key starters — which should put more pressure on the USC pass rush — and the tackling also could have been better for the Trojans last season.

Mix in a favorable schedule and there could be plenty of points in USC games this season.

There may not be a college football team more overlooked year after year than the Utah Utes: And overlooking Utah is a big mistake.

Head coach Kyle Whittingham has built a winning program and 2021 should be no different, as the Utes return 19 starters this season — nine of which will be on what should be another dominant defense.

Led by the likes of Mika Tafua, Maxs Tupai, and Devin Lloyd, this stop unit will be among the best in the conference. But defense usually isn't the problem in Utah over the years.

So, where do you go to improve offense? The Big 12 of course. And that’s exactly what Whittingham has done, bringing in transfer quarterback Charlie Brewer from Baylor, then pillaging Oklahoma for running back T.J. Bledger and receiver Theo Howard.

But Brewer is the key here. The former Bear had an excellent 2019, throwing for 3,161 yards with 21 TDs and seven interceptions in leading Baylor to the Big 12 title game. If he can regain some of that magic behind arguably the best offensive line in the Pac-12, don’t be surprised if he and the Utes are back in another conference title game.

The last thing to love about this bet is the Utes schedule. They have a tough game at USC on Oct. 9 but have a good chance to be 4-0 heading into the game. Utah should then be favored in at least six of their final seven games, with a home date against Oregon on Nov. 20 being the only relative toss-up.

I really like what Washington brings to the table in 2021, in what amounts to Chris Lake’s first full season as head coach of the program. The Huskies return 17 starters this season — including seven on what should be another strong defense.

That unit will be led by linebacker Edefuan Ulofoshio and arguably the best secondary in the Pac-12. If the Huskies can get back impact edge rusher Zion Tupuola-Fetui back at some point this season, watch out: This defense could be downright scary.

On offense, Washington is led by its run game and a powerful offensive line that returns all five starters. They should be able to make big holes for a deep and talented group at running back.

If the Huskies can get competent QB play out of Dylan Morris — or maybe even from five-star freshman Sam Huard — they could not only be the class of the Pac-12 but maybe end the conference’s drought in the College Football Playoff... Maybe.

For me, it comes down to question marks in the Pac-12 — and Washington has the fewest of them among the conference favorites. Combine that with a good schedule — and this value — and the Huskies are the pick.

USC also has a cushy schedule but the offensive line needs to be better in front of Slovis and the secondary lost its top two players. Arizona State could be a conference contender but those recruiting violations could put a damper on the season. And while Oregon rivals Washington’s talent, their matchup this season is at Husky Stadium.

And like that game against the Ducks, all of the Huskies' toughest conference games are at home this season. Plus, their conference crossover games will be road dates at cupcakes Arizona and Colorado.

The Pac-12’s last CFP participant? The Washington Huskies in 2016-17. Coincidence? I think not. 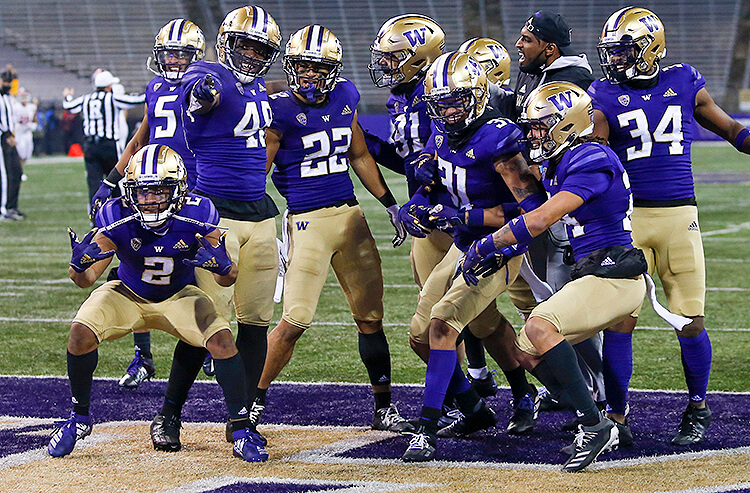