Justin Fields may be gone, but the road to the Big Ten title still goes through the Buckeyes. We break down Ohio State, Nebraska, and the rest of your best bets from the conference with our Big Ten college football betting preview.

What’s that old saying about the road not traveled? Well, that’s not the case in the Big Ten because all roads to the conference championship lead through Columbus and the Ohio State Buckeyes.

In a conference with Penn State, Michigan, Wisconsin and teams like Indiana on the rise, Ohio State’s dominance is that much more incredible. Even though Justin Fields and Trey Sermon have moved on, Ryan Day has restocked the shelves, the Buckeyes are still the betting favorites to win their fifth consecutive Big Ten title.

Want an idea of just how dominant Ohio State has been? Despite the fact the Buckeyes play in arguably the second-best division in college football, they haven’t lost a Big Ten East game since a 2016 White Out game at Penn State and are 74-5 in Big Ten play over the last nine years. Yeesh.

Yes, replacing Justin Fields is a big deal. But the Buckeyes have arguably the best receiving corps in the country and should have a beast of an offensive and defensive line. And now the QB room has gotten a boost with No. 1 overall recruit Quinn Ewers redeclared and possibly taking snaps before we know it.

The team with the best chance to dethrone Ohio State is Wisconsin. The Badgers return Graham Mertz, who could be the best QB in the conference, have a retooled running back room, and will always have a bruising o-line and a solid defense.

Can Indiana continue its upward trend, will Nebraska finally see a breakthrough in Year 4 of the Scott Frost era (#FadeNebraska), and as always, what to do with Michigan?

For anyone who has followed my college football betting coverage over the last couple of seasons, was ever any doubt?

It was 2018 when Scott Frost was announced as the new head coach of Nebraska, as Cornhuskers fans trumpeted from the rooftops that their savior had arrived. Well, it’s funny how things work out sometimes. Frost is now just 12-20 at Nebraska and I’m not sure if the turnaround is in sight.

QB Adrian Martinez has never been able to put it all together for the Huskers. He looks great in some games but awful in others. He consistently battles his accuracy against good teams, and while he has 22 rushing touchdowns, he also has 32 fumbles to go along with those.

To be fair, the Nebraska defense has shown some promise, particularly when it comes to stuffing the run. But they have a non-existent pass rush and that has opened Nebraska up to big plays down the field. To make matters worse, they have potentially lost their best edge rusher, Will Honas, for the season due to a knee injury.

But this fade isn’t about the players, it’s about expectation surrounding a name.

Nebraska is a program and a fan base that still believes it is a great football school. But that’s just not the case. Want an example? Well, Nebraska actually has the sixth-best odds to win the Big Ten at +1,600, but their win total of 6.0 is ahead of just Purdue, Michigan State, Rutgers, Maryland, and Illinois.

Nebraska is also a cold 13-19-1 ATS (41.9 percent) with Frost at the helm and is 6-11 ATS when laying points. The Cornhuskers are projected favorites in six of their first seven games. #FadeNebraska should be trending early this season.

Why not give Tua’s little brother some love? Taulia Tagovailoa had about as up-and-down first season in Maryland as anyone could have. COVID-19 definitely had something to do with that but there was still a learning curve to be sure.

But in the two losses, he completed just over 50 percent of his passes for just 335 yards with one touchdown and six picks. That said, Tagovailoa and the Terrapins’ offense is primed to break out in 2021.

On the other side of the ball, the Terps have potential. It was hard to throw on their secondary last season and it will be again as all the starters at the back return. But that was in part because you could run all over Maryland.

The Terps surrendered 230 yards per game on the ground and, as a result, allowed 32 points per game. They also didn’t have much in terms of a pass rush last season and there isn’t much to say that won’t be different in 2021. This group will be improved but will be leaky enough to make them an exciting Over play each week.

This isn’t meant to be a slight against Iowa. I think they will be a very good team in 2021. Tyler Goodson will give opponents nightmares this season and has All-American potential, and so does center Tyler Linderbaum for that matter. The defense known for getting pressure without blitzing and dropping into tricky zone coverages should be strong once again.

But the road to nine wins looks tough. That’s not to say the Hawkeyes can’t do it, but it won’t be easy by any means. For starters, they have road dates at Iowa State, Wisconsin, and Northwestern. They also welcome Indiana and Penn State to town.

It doesn’t get easier when you need more out of the quarterback position. Sophomore QB Spencer Petras returns and while he was able to show off his big arm at times last season, he battled his consistency and his accuracy far too often. And now his top wide receiver Ihmir Smith-Marsette and both of his starting tackles are gone.

The Hawkeyes’ record will probably land somewhere between 7-5 and 9-3, but the former seems more likely than the latter, so with a number of 8.5 we’re taking the Under.

This is the obvious value play in the Big Ten this season. Wisconsin is primed for a big year after being one of the programs most impacted by COVID-19 last season.

Graham Mertz is healthy and could be the best quarterback in the conference. Jim Leonard’s defense is returning eight starters and should be among the best units in the country.

Besides COVID, the problem for Wisconsin last season was the once explosive running game averaged just 3.9 yards per carry, but that could return to normal in 2021 as well. The offensive line should once again be stout and RB Jalen Berger will have a chance to bounce back while being pushed by a batch of strong freshman runners.

But the biggest thing to like about this value play is the Badgers’ path to the conference title game is pretty clear. Yes, they have some tough matchups against Penn State, Notre Dame, Michigan, and Iowa, but three of those games are at home and the other is a neutral site.

The matchup with Iowa on Oct. 30th is the key one, with a date in the conference title game possibly up for grabs. But with a full stadium at Camp Randall, this Badgers team will be tough to beat and should be a tough test for Ohio State.

This is a chalky play, no doubt. But it’s hard to argue against Ohio State in this spot. As we said, they have been the class of the Big Ten, and even though Justin Fields leaves some very big shoes to fill, whoever is under center will have plenty of support around him.

For starters, with Chris Olave and Garrett Wilson both returning, the Buckeyes have arguably the best receiving corps in the country. OSU will also have a beast of an offensive and defensive line this season. The secondary should be better after giving up too many big plays last season.

Ohio State will have some challenges on the schedule with an early-season date with Oregon, a date with Penn State at the Horseshoe, and trips to Indiana and the Big House to take on Michigan. That said, it will be shocking if they lose more than one game in the regular season. The Buckeyes will be in the national title hunt once again. 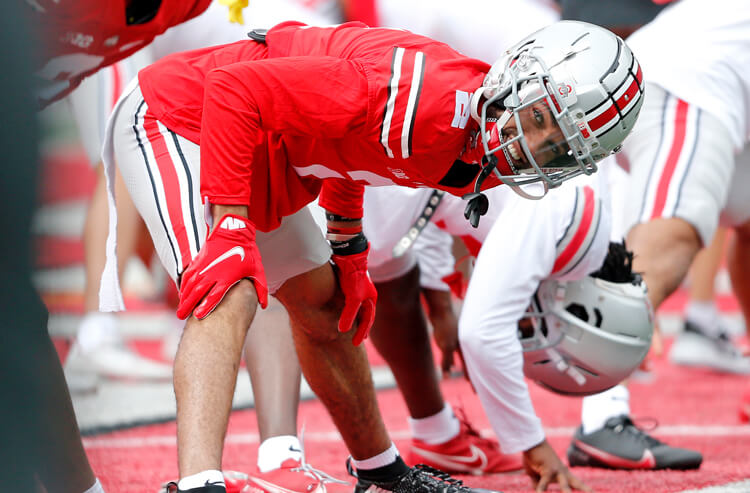