People seems to doubt Mike Leach and Wazzu every year, but we'll be using caution when fading his Cougars in 2019 after going 11-2 ATS a year ago.

The Pac-12 has been the odd man out among the Power 5 conferences when it comes to the College Football Playoff, having only qualified two teams in the five seasons since the CFP was introduced.

But, is the Pac-12 is as bad as everyone makes it out to be? This season, they have five teams ranked in the preseason Top 25, while say, the ACC only has two (but one is Clemson). So, not only do we figure out if there is a CFP contender in this bunch, we give you our best bet/fade, Over/Under, season win total picks, and much more in our Pac-12 betting odds breakdown.

It seems like every year people overlook Mike Leach and Wazzu. Last season, people were wondering what would happen after Luke Falk moved on and then Gardner Minshew happened. All he did was lead the Cougars to an 11-2 record, while throwing for almost 5,000 yards, not too mention a Pac-12 best 11-2 record against the spread. Now, it’s Eastern Washington transfer Gage Gubrud’s turn to see if Leech’s air raid offense can extract the best out of him.

But the most overlooked aspect of Leach’s squad is his defense. They led the Pac-12 in sacks, forced 23 turnovers and ranked fourth in passing yards against per game. While there is some turnover, this is just the second year of a new defensive system in Pullman.

Oh, the enigma that has been the Southern Cal football program. So much potential every year, and more often than not in the past decade that potential has gone unrealized. Now, the Trojans enter 2019 with another talented roster, but so many questions about what that roster can do after one of the most disappointing seasons in recent memory.

Sophomore quarterback JT Daniels needs to take a step forward in his development if the Trojans want to improve on their 5-7 record from last season. He’ll have some help with an elite receiving core, but the defense, while full of blue-chip recruits, will be very inexperienced. No matter that, expectations will always follow USC because of the prestige and talent and that should create an opportunity for bettors this season.

Because of that tantalizing potential, and the fact they are USC, they will always be heavily bet by the public and that should create some inflated lines. The Trojans have only covered seven games over the past two seasons. It feels like 2019 could be more of the same.

Khalil Tate entered 2018 with a ton of confidence, and then the season happened. It turned out to be an injury riddled campaign where Tate struggled through ankle, shoulder and toe ailments. And it showed. His completion percentage dropped from 62 percent to 56.3 and the most jarring stat: Tate had 1,200 fewer rushing yards last season as he had the year before. 1,200! Despite that, the Wildcats still ranked third in the Pac-12 in scoring at 31.3 points per game.

Now, Tate enters this season healthy and somewhat under the radar, which could be a good thing for the Wildcats. He also has another year of experience in Kevin Sumlin’s system, a relatively soft schedule to start the season, and running back J.J. Taylor, who racked up 1,434 rushing yards, returns. This could once again, be the most explosive offense in the Pac-12.

We have to mention the defense as well. Only UCLA and Oregon State gave up more points and surrendered more yards than Arizona did in the Pac-12 last season. Arizona has plenty of experience returning on that side of the ball, but should continue to struggle getting after opposing quarterbacks.

WEEK 1 IS JUST A FEW WEEKS AWAY! CHECK OUT ALL THE LATEST LINE MOVES ON OUR LIVE ODDS PAGE!

Was there really any doubt about which team this would be? Cal’s defense was one of the most feared in the country last season. Nationally, they ranked ninth in passing yards, 15th in total yards and 22nd in points allowed. The scariest part about the Golden Bears is that nearly every impact player returns, starting with linebacker Evan Weaver. Additionally, they bring back nearly every member from a secondary that led the Pac-12 in passing yards (175.1 per game) and interceptions (21). This defense will be giving the rest of the Pac-12 nightmares all season.

But what will make Cal a great Under bet this season, will be what holds it back from taking the next step. It’s offense. Cal ranked 115th in total yards and 116th in points per game and there isn’t a whole lot to be optimistic about in 2019. The Golden Bears are replacing their quarterback, running back and top four receivers. Who knows, maybe it’s a good thing, but at the very least you have to expect some growing pains.

There is a lot of turnover in Palo Alto this season, but two things remain the same. David Shaw and K.J. Costello. If there is anyone equipped to deal with this amount of turnover, it’s Shaw. And he arguably has the best quarterback in the conference to carry the load.

While other quarterbacks in the Pac-12 may be getting more hype, Costello arguably had the best 2018 season of the returning signal callers. Costello completed 65.1 percent of his passes for over 3,500 yards and 29 touchdowns.

Also, in now eight seasons at Stanford, Shaw has 82 wins and has never had fewer than seven wins in the regular season. Excellent coaching and quarterback play should get the Cardinal over this low number.

TEST YOUR NCAAF HANDICAPPING SKILLS IN ONE OF OUR FREE CONTESTS AND WIN PRIZES!

This one may be a bit controversial, considering the Huskies are the favorites to win the Pac-12 North and the co-favorites to win their third conference title in the last four years. While Chris Peterson has done an awesome job since arriving in Seattle, the amount of turnover he has to deal with this season is unreal, starting with the Huskies famed defense.

It’s essentially a brand new unit after it seems every player from last year’s squad got selected in the NFL Draft. The Huskies recruit well, and Peterson and his staff get the benefit of the doubt when it comes to the defense, but its tough to envision not seeing some kind of drop off.

And then there’s the quarterback situation. Jake Browning graduated, and while he probably wasn’t as great as Huskies fans had hoped, he was very efficient. Now, the offense rides on the arm of Georgia transfer Jacob Eason and it’s hard to know if he will be an upgrade over Browning. He also faces a stiff test early, as Cal and their elite defense comes to Seattle in Week 2. While it’s fortunate that USC, Oregon, Utah and Washington State all come to Seattle, this Huskies squad will be in tough to get to 10 wins.

WILL A CFP CONTENDER PLEASE STAND UP?

Always the bridesmaid, never the bride. That’s what the Pac-12 is when it comes to the College Football Playoff. No Power 5 conference has had fewer qualifiers for the CFP, sending only two teams in the five seasons since its introduction. The last being Washington in 2016-17.

So, the big question surrounding the Pac-12 this season, is whether there is a contender among this bunch. The Pac-12 will be better from top-to-bottom this season, but with the perceived deficiency of the conference nationally, the winner will likely need one or fewer losses to qualify.

So, who, if any program, has a shot? If the stars align maybe USC will have a bounce back season, but that seems unlikely. Mike Leech and Washington State can’t be counted out, but it will take some real breakout performances. That leaves Oregon, Washington or Utah. The Utes may have the easiest path in the South, but we still think its another team that has the conference’s best chance to return to the CFP.

YOU CAN’T OVERLOOK THE UTES

The Pac-12 South this season will essentially stack up like this: Utah, then everyone else. The Utes may be getting less press than any Power 5 conference favorite heading into the season, but don’t underestimate them. Because that’s exactly what the Utes are, the +250 favorite to win the Pac-12.

Utah won nine games last season and that was without their starting quarterback and running back for the last month of the season. They also return 15 starters overall. The offense is balanced, the defense is stout and with a favorable schedule, don’t be surprised if the Utes are back in the Pac-12 title game.

Behind Utah, there are a ton of questions in the Pac-12 South. You could make a case for literally all the remaining teams to finish second in the division. All of them have potential, but all come with significant questions. How hot will Clay Helton’s seat at USC get is the Trojans get off to another poor start? Will UCLA take a step forward the second year into the Chip Kelly era? Will Khalil Tate return to his Heisman form? Will Arizona State get sufficient quarterback play? And is Laviska Shenault Jr. so good that Colorado can make a jump? With so many possibilities in play it will be important to follow along with all these teams early on.

BEST VALUE TO WIN THE PAC-12

This all starts and ends, of course, with Justin Herbert. I firmly believe he is the best quarterback in the conference and he’s going to show it this season. But, the best part for the Ducks is that he’s not going to do it alone. The Ducks return two running backs who totaled over 2,100 rushing and receiving yards, essentially his entire starting offensive line, and a fierce defensive front that now features No. 1 overall recruit Kayvon Thibodeaux.

The Ducks are buying into Mario Cristobal’s system and are primed for a big run. Now, all they need to do is learn from their experience and avoid the letdowns they had from a season ago. If the Ducks can keep the pedal to the metal all year, and avoid the eggs like the one against Arizona last season, then they have a real opportunity to capture their first conference title since 2014. The combination of talent, experience, and the current price makes the Ducks the bets value to win the Pac-12. 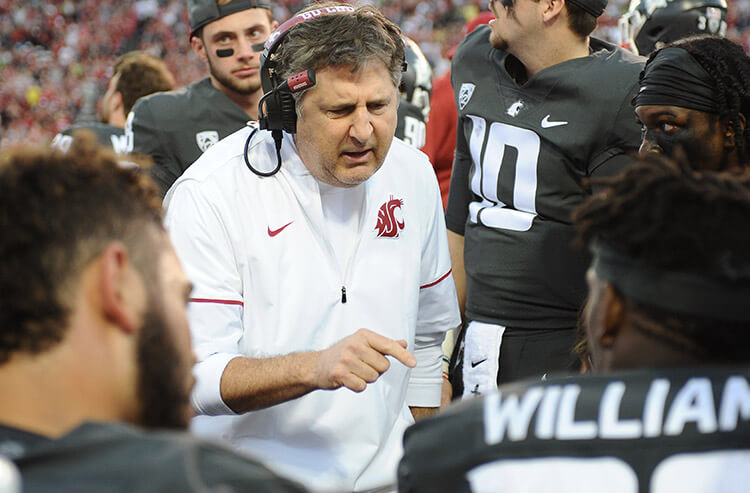