Ohio vs Louisiana Picks and Predictions: Which Side Finds a Get-Right Spot?

The Bobcats and Cajuns are both off to pretty questionable starts this season. As the two get set to clash in Week 3, our Ohio vs Louisiana picks break down which of these very fade-able teams is worth backing.

We’ve got a college edition of Thursday Night Football. The Ohio Bobcats will take their 0-2 record off to Lafayette, Louisiana to take on the 1-1 Ragin’ Cajuns at Cajun Field on Thursday, September 16.

Louisiana was ranked in the AP 25 before the season began but they have not looked anywhere close to a Top 25 team to start the season. After two weeks of underachieving for both teams, who will prevail on Thursday night? Find out in our Ohio vs Louisiana pick and predictions.

Louisiana opened as a -19.5 favorite and has now been bet up to a -20 point favorite. Some sportsbooks like FanDuel have raised their lines to Louisiana -20.5 for this Thursday night matchup.

However, the total has shifted from 54.5 at opening to 57.5. This is based on both teams struggling on the defensive end to start the season.

Under is 6-0 in Ragin' Cajuns last 6 home games vs. a team with a losing road record. Find more NCAA betting trends for Ohio vs. Louisiana.

It’s been an ugly two weeks for Ohio. They opened up their season at home against Syracuse and couldn’t score a single touchdown in their 29-9 loss. That was a disappointing loss, but you figure a loss to an ACC school isn’t the worst.

However, Ohio proceeded to then lose to Duquesne, an FCS school, by a score of 28-26. Duquesne had previously lost to TCU, 45-3 and never had a chance against the Horned Frogs.

So, that’s how the Bobcats’ season has gone so far. Sophomore quarterback Kurtis Rourke has completed 70 of his passes this season but only has one touchdown to show for it. His quarterback play really hasn’t been bad, along with the running game behind O’Shaan Allison, who has 119 yards on 21 attempts rushing the football. What’s bringing this offense down is the O-line. The pass protection has been lackadaisical and the run blocking isn’t far off either.

To be fair, 26 points against an FCS team usually gets the job done. This time, it didn’t against Duquesne, thanks to a defense that has allowed 225.5 yards per game on the ground in the first two games. Ohio has a solid secondary that can cover receivers, but nothing else.

Louisiana, on the other hand, lost to Texas in a big Top-25 ranked game. It turns out Louisiana and Texas never belonged in the Top 25 to begin with. The Ragin Cajuns lost to Texas 38-18 in Week 1 and then proceeded to squeak by Nicholls 27-24 at home.

Texas lost to Arkansas by double digits the following week and now have a quarterback controversy. That loss to Texas looks worse by the day. But to only defeat Nicholls by three points is completely embarrassing if you’re Louisiana.

Nicholls gained 359 yards of offense in that game and earned more first downs and third-down conversions than Louisiana. Memphis had defeated Nicholls 42-17 the previous week.

The Ragin Cajuns are led by senior quarterback Levi Lewis. The veteran has 586 yards passing in two games with three touchdowns and no interceptions. His play hasn’t been bad behind a formidable offensive line.

Both of these teams need to look at themselves in the mirror before Thursday’s game. Louisiana is not worthy of being a three-touchdown favorite, even against Ohio.

Louisiana will still win this game, don’t get me wrong. However, it won’t be by more than 20 points.

As I said above, Louisiana has shown off a solid pass rush that has really been the only effective portion of their defense. In turn, the pass protection from Ohio has been dreadful, giving Rourke little time in the pocket to make things happen.

Neither team has had a fantastic passing game to start the season. The top receiver for Ohio has seven catches for 102 yards, while the leading receiver on Louisiana has three receptions for 84 yards, along with a touchdown.

Ohio has looked solid in coverage and should be able to shut down any deep balls that are thrown their way.

I know both teams are led by solid quarterbacks, but they’ll need help on offense from other playmakers and their offensive lines. And they won’t get that. 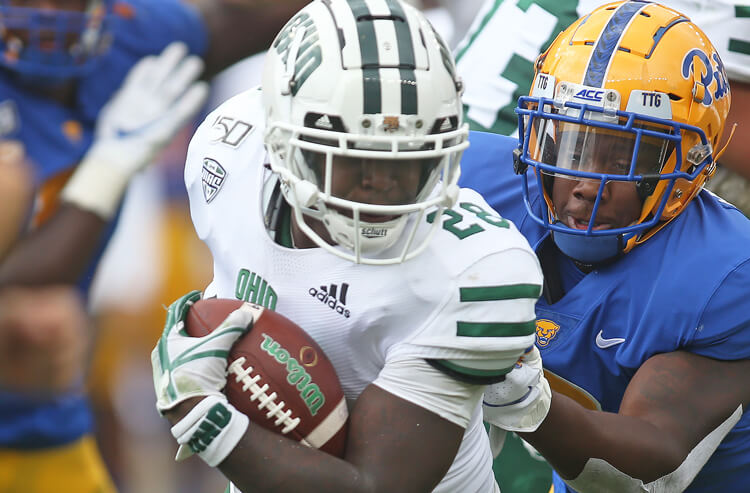 Ohio vs Louisiana Picks and Predictions: Which Side Finds a Get-Right Spot?
Provided by