Navy vs Tulsa Picks and Predictions: Midshipmen Lost In a Storm

Navy's defense has belied its name this season, and the Midshipmen run the risk of being swept away by the Golden Hurricane. Find out if they can hold water with our Navy vs Tulsa picks.

The Navy Midshipmen are potentially on their way to the worst season that Ken Niumatalolo has had since becoming the team’s head coach. Now, Navy faces a Tulsa Golden Hurricane group that has won three of its last four and is rising in the American Athletic Conference standings.

Will the Midshipmen find a way to keep things close on Friday? Keep reading our Navy vs. Tulsa picks and predictions to get a better idea of who to back in this game.

Tulsa was a 10-point favorite at open and is now laying as many as 11.5 points, despite nearly three-quarters of the action being on the Midshipmen right now. The total, meanwhile, has gone from 48.0 down to either 47.5 or 47.0.

Tulsa is 5-0 against the spread in its last five games when coming off a bye week. Find more NCAA betting trends for Navy vs. Tulsa.

Getting the right number on this game is going to be important, as Tulsa is laying either 11.0 or 11.5 on most books. However, the Golden Hurricane can be found as 10-point favorites if you look hard enough, so make sure you don’t cheat yourself out of points.

This head-to-head series has mostly gone Navy’s way in the past, with the Midshipmen winning in five of the last six meetings between these teams. However, the one win for Tulsa was the most recent game, with the Golden Hurricane earning a 19-6 win as 12-point favorites when the two met last year.

Over the last three seasons, Tulsa is 8-1 against the spread when coming off a game in which the team committed three or more turnovers. They’re also 6-0 against the spread when coming off a game with a turnover margin of -2 or worse in that time. With that in mind, look for the Golden Hurricane to avoid making costly mistakes in this one. Head coach Philip Montgomery will emphasize the importance of ball security here more than ever, as turnovers can be deadly against a team that runs the ball as often as Navy.

And speaking of Montgomery, Tulsa is 10-3 against the spread when coming off a bye week in his time as the coach. Don’t think for a second that the extra week won’t come into play here, as that extra time is crucial when facing an offense as unique as the triple-option attack.

Offensively, the Golden Hurricane should be able to make enough things happen in this game. Tulsa quarterback Davis Brin occasionally makes some bad mistakes, but he’s a very talented player and is more than capable of having some big games. Now, Brin gets to face a Navy defense that has allowed 31.9 points per game this season.

The Midshipmen defense is no longer the elite group it has been under Niumatalolo in the past, and it is actually one of the team’s biggest weaknesses. That means that the Golden Hurricane should also be able to run the ball pretty effectively, so keep an eye on Shamari Brooks here. Brooks has had a huge year for Tulsa thus far, and he has done so despite splitting carries with a very capable stable of backs.

Last year, these teams combined to score only 25 points in what was a serious defensive battle. This time around, the two should score more points than that but it still should be a somewhat low-scoring affair.

Navy comes into this one after having played three straight games that have gone Under the total. Tulsa has also had two weeks to prepare for an offense that isn’t a threat to make big plays, and that means that the Midshipmen could struggle to score in this game. However, the Golden Hurricane aren’t going to put up a massive number either.

Tulsa can win this game 28-14 and the Golden Hurricane would cover and the Under would end up hitting. Don’t be surprised if that’s ultimately what this one looks like. The sharp money happens to be on the Under early, with a majority of the bets being on the Over and the total moving the other way. 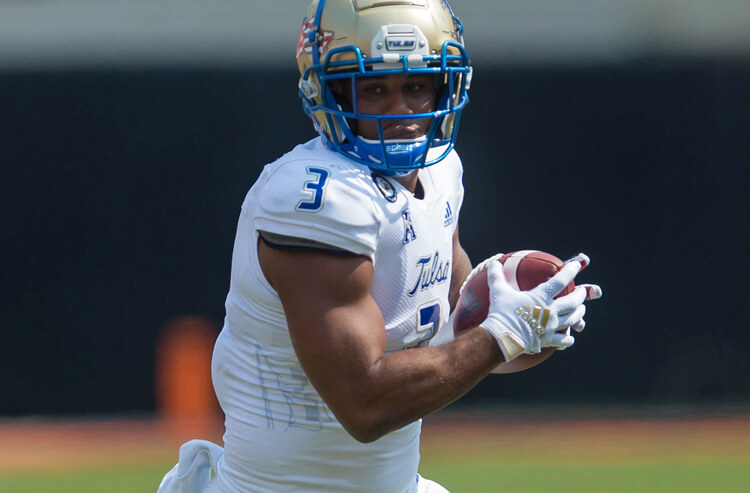 Navy vs Tulsa Picks and Predictions: Midshipmen Lost In a Storm
Provided by