Michigan ran the ball down Ohio State's throat last year, but offseason changes and recent injuries will make sure that doesn't happen again. With the Buckeyes having a superior offense, our college football picks are siding with the favorites. 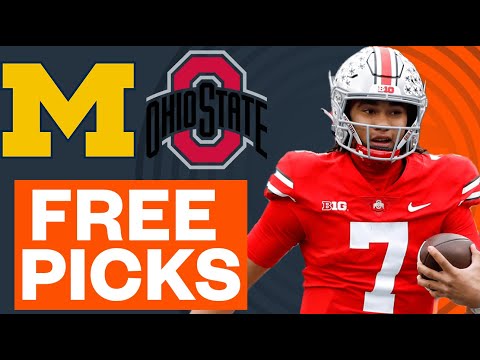 The rivalry that is so massive, it’s simply known as The Game. The Michigan Wolverines and Ohio State Buckeyes continue their storied tradition with yet another epic matchup.

Both teams enter this game that equates to the de facto Big Ten Championship with perfect 11-0 records, where the winner will have a huge leg up when it comes to qualifying for the College Football Playoff.

So, what is the best bet in what should be yet another intense and tightly contested edition of The Game? I dig through the numbers and tell you what my favorite play is in my college football betting picks and predictions for Michigan vs. Ohio State on November 26.

Revenge will be on the mind of Ohio State following the 42-27 loss to Michigan in last year’s edition of The Game. The Wolverines bullied the Buckeyes with their physicality in that matchup and the gameplan should be no different this time around. It just won't be as easy.

This time Michigan won’t have the comforts of playing in front of the home fans in Ann Arbour. And more importantly, the health of its backfield leaves a lot of question marks.

Top back Blake Corum went down with an injury in last week’s escape act against Illinois, while electric backup Donovan Edwards was banged up in Week 11 against Nebraska. The two backs have combined for nearly 2,000 yards and 22 touchdowns at over six yards per carry. While Corum has come out and said he’ll be good to go, it’s hard to know how effective he will be.

The other problem is that after last year’s loss, Ryan Day knew he needed to improve his defense. So, he went out and hired coordinator Jim Knowles away from Oklahoma State, and the results have been immediate. The Buckeyes rank fifth in the nation in opponent yards per play when facing FBS opponents and 10th in scoring defense, allowing just 16.9 points per game.

Expect the Buckeyes to try and take advantage of the battered Wolverines backfield and force an inconsistent JJ McCarthy to beat them with his arm. The sophomore signal caller got off to a great start this season, but he hasn’t been as productive as the coaching staff would like. McCarthy has thrown for just 655 yards while completing 52.3% of his passes over his last four games.

Now let's talk about CJ Stroud and the Ohio State offense. The high-octane Buckeyes' offense leads the country with 7.3 yards per play and ranks second in scoring at 46.5 points per game. Their back backfield is also banged up, but they have the benefit of having Stroud and the best wide receiver room in the country — led by Marvin Harrison Jr. and Emeka Egbuka.

This Michigan defense is great — leading the country in opponent yards per play — but it has not seen anything close to an offense like the Buckeyes'. Like, not even in the same realm.

At the end of the day, the biggest change from last season is Ohio State now has the ability to stuff the run. With Michigan’s backfield battered it could be hard for the Wolverines to generate points. Stroud will make some big plays late to pull away and cover this spread at home.

Ohio State opened as 8.5-point home chalk but it was Michigan that saw the early money, moving the line to 7.5. There has been some buyback on the Buckeyes with some 8.0s starting to pop up as of Friday afternoon.

With that said, I’m not sure oddsmakers are not giving enough respect to the impact a Blake Corum injury has on the line. I’ve already stated that I’m happy to lay the 7.5 points with the Buckeyes, but with a banged-up Corum, I’d be comfortable taking them up to -9.5.

We just saw what happened when Corum went down against Illinois. The Wolverines had to rely more on the arm of JJ McCarthy and he ended up going 18-for-34 (his second-most pass attempts in a game this season), for just 208 yards with no touchdowns in a game they were losing all the way to the final minutes. The final score was 19-17 in a home game where they were favored by 17.5 points.

Even in games where the Buckeyes have struggled (Notre Dame, Penn State, Northwestern, Maryland), they have still managed to win by at least 11 points in every game this season. They'll do it once again on Saturday.

The total hit the board at 57.5 with steam on the Under, moving the number down to the current 55.5. And it makes sense. This is a matchup of Top 5 teams when it comes to opponent yards per play, and Top 10 scoring defenses.

Michigan has the type of defense that can cause CJ Stroud and the Buckeyes offense problems. If the Wolverines can pressure Stroud without blitzing too much, they should be able to limit him at least for a little while.

On the other side of the ball — even with a banged-up backfield — Jim Harbaugh won’t be abandoning the run anytime soon. That could lead to the Wolverines struggling to put up points because the best way to attack the Ohio State defense is with the deep ball. Something McCarthy has had problems with all season.

I would lean toward the Under, but Ohio State’s ability to put up crooked numbers means I’m staying away.