Michigan is 5-0 and rolling on both sides of the ball ahead of a road trip to face Indiana in Week 6. The Wolverines' offense may not be the truth but our picks have full faith in the defense silencing the Hoosiers.

The No. 4 Michigan Wolverines will look to continue their push towards a spot in the College Football Playoff as they visit the Indiana Hoosiers for a Big Ten conference showdown on Saturday.

Michigan comes into the game as a substantial favorite after starting the year 5-0, while Indiana has lost two straight games to fall to 3-2.

Can the Wolverines take care of business on Saturday, or do the Hoosiers have some surprises in store for Michigan?

Let’s take a closer look at this matchup in our college football picks and predictions for Michigan vs. Indiana on Saturday, October 8.

Michigan vs Indiana picks and predictions

As expected, Michigan hasn’t kept up its torrid scoring pace from the first three weeks now that it is facing stiffer competition. After scoring over 55 points per game against overmatched opponents, the Wolverines worked much harder in wins over the Maryland Terrapins (34-27) and the Iowa Hawkeyes (27-14).

While the offense may have slowed down, the Michigan defense is playing as well as ever. The Wolverines are allowing just 11.6 points and 252 yards per game, both of which rank sixth in the country. Michigan has hounded opposing quarterbacks with its pass rush, recording 15 sacks over its first five games.

That could be a problem for Indiana, which has relied heavily on throwing the ball so far this season. The Hoosiers are passing the ball over 65% of the time on offense, and aren’t doing so very efficiently. While Indiana is 33rd in the country in passing yardage per game (278.8), it is averaging a paltry 5.67 yards per attempt, one of the lowest figures in the FBS.

Indiana will likely be reliant on its passing game to attempt to stay in the game on Saturday. Michigan comes in as more than a three-touchdown favorite. The Wolverines should be able to score plenty of points against a Hoosiers defense that is allowing 30.5 points and 423.4 per game and has yet to play against a team of Michigan’s caliber.

That means that Indiana’s best hope to stay in the game will be to turn it into a shootout, in the hopes that it can pierce the excellent Michigan defense. This isn’t likely to go well for the Hoosiers.

Indiana quarterback Connor Bazelak has thrown for just three touchdowns and three interceptions over the last two weeks and has been sacked eight times in those games. While Nebraska and Cincinnati have capable defenses, they aren’t in the same league as the Wolverines, who have held four of their five opponents to 14 points or less.

This is an incredibly tough matchup for the Hoosiers. I’m not sure how much Michigan will score, which scares me away from backing it given the huge point spread. On the other hand, this should be a banner day for the Wolverines' defense, and that’s why I’m instead focusing on Indiana’s team total.

You can find the Indiana total set anywhere from 17.5 to 18.5 at most sportsbooks. Since we can get slightly better odds at Under 17.5 without passing over any key numbers, that’s where I’m putting my money.

Michigan opened Saturday’s game as a 22-point road favorite. Over the week, the lines have drifted slightly further in Michigan’s favor, with the consensus spread now sitting around 22.5 points.

The Wolverines have started the season 5-0 behind an unusual balance of offensive and defensive success. Michigan is seventh in points scored at 45.4 points per game, while its defense ranks sixth in the nation in points allowed (11.6).

The Michigan offense has been particularly effective on the ground, running for 221.8 yards per contest. This is partially due to the fact that the Wolverines are usually playing with a lead. But they are also running for 5.6 yards per rush, good for 11th in the country. Junior running back Blake Corum has already run for 611 yards and 10 touchdowns on the year. Indiana hasn’t been particularly stout against the run either, giving up 145.6 yards per game.

On the other hand, Indiana will struggle to get much of anything going against the Michigan defense. The Hoosiers haven’t been able to run the ball effectively, averaging just 105.6 yards per game, while Michigan is ranked 14th against the run (94.2 yards allowed per game). While Indiana fares better when throwing the ball, Michigan has held opponents to just 157.8 yards per game in the air, and just 5.37 yards per passing attempt.

These factors support Michigan being a huge favorite on Saturday, even playing on the road. However, giving up over three touchdowns is a little too much for me to back the Wolverines, and I’m avoiding playing the spread in this game.

After opening at 57, the total on this game has moved up to 58.5 as of Thursday afternoon. On the surface, that number looks solid. Michigan has played over that number three times, and Indiana has twice, with the Wolverines actually playing to exactly both 58 and 59 points once this season.

However, a deeper look has me favoring the Under in this game. Michigan’s offense has slowed down significantly against its Big Ten competition, scoring an average of 30.5 points per game against Maryland and Iowa.

Meanwhile, Indiana has yet to prove it can score against a capable defense. The Hoosiers scored 21 points against the Nebraska Cornhuskers last week, and 23 points in a win over the Illinois Fighting Illini earlier in the season. Even in its biggest offensive outburst — which came against the Idaho Vandals — Indiana only managed to score 35 points.

The Hoosiers will face their toughest test of the year offensively when they line up against the Michigan defense. That means that the Wolverines will have to carry most of the load if this game is going to hit the Over.

It’s possible that Michigan could get there if it is willing to score quickly by airing out the ball. The Wolverines could even find success this way. Sophomore quarterback J.J. McCarthy has been highly efficient, throwing for six touchdowns and no interceptions with a 78.6% completion percentage this year, while Indiana is allowing 277.8 yards a game through the air.

But with Michigan likely to build a lead early and with one of the best running backs in the country in Corum, the Wolverines will almost certainly pound the ball on the ground, especially in the second half. While I don’t have a bet for the total, this makes me lean towards the Under, as it’s hard to see Michigan scoring enough to hit a reasonably high number like 58.5.

Michigan has held opponents to 14 points or fewer in four of its last five games. Find more NCAA betting trends for Michigan vs. Indiana. 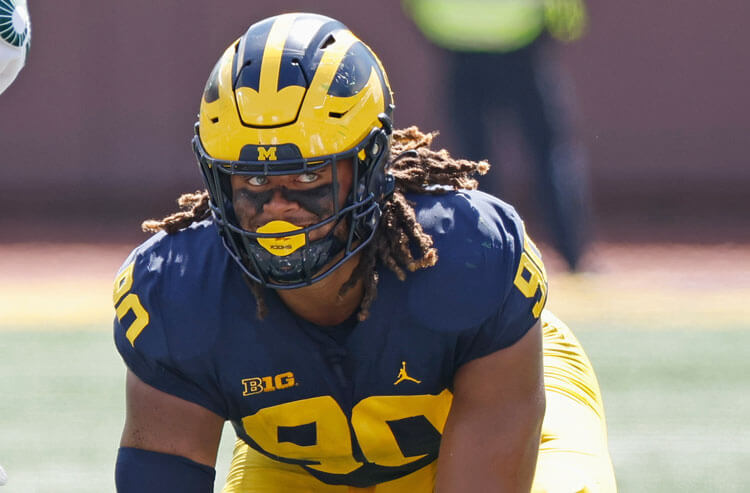