Despite still winning by 17 points, Georgia wasn't at its best in its Week 4 matchup with Kent State. As such, we suspect the Bulldogs will mean business when they go on the road to face Mizzou. Read more in our NCAAF betting picks below.

Georgia and Missouri will both play their second conference game of the season when they face off Saturday afternoon.

Georgia has been mostly dominant but did look quite human in their last game against Group of Five opponent Kent State. The Bulldogs remain undefeated but were uncharacteristically generous in giving up multiple touchdowns.

Missouri comes into this one off of heartbreak, losing in overtime at Auburn as they fumbled on the goal-line, giving the Tigers a win.

Will Georgia bounce back from their first non-cover of the season? Find out in college football picks and predictions below.

Georgia vs Missouri picks and predictions

I'm going to continue my Under run with the Bulldogs, as it's been too good for me to stop.

Georgia has played four games on the season, and all four have gone Under. The reason? It's multifaceted, but one of the biggest is a disconnect between the spread and the total in Georgia's games.

For instance, this week, FanDuel has the Bulldogs listed as a 28-point favorite with a total of 58.5. Against popular opinion, bookmakers don't "predict" final scores; instead, they make numbers that will attract action on both sides. However, those two data points suggest that books expect Missouri to score around three times. A team total that is sitting just over 12 points backs that up. I couldn't disagree more with that thinking, and that's why I'm riding the Under as my best bet.

Missouri has played two Power Five opponents scoring 12 points and 14 points against them. To put it plainly, neither of those defenses are comparable to the Georgia defense – I'm not sure any team in college football is.

Yes, Georgia gave up some cheap scores against Kent State a week ago, but I believe that should be considered an outlier. From a big-picture perspective, the data surrounding their team suggests they are still an elite defense.

Troubles last week against a weak opponent open value for this one for two reasons. Georgia will be ready to rectify those struggles after a week of hearing about them. Secondly, oddsmakers have ticked this number up a few more points than it would have had they not given up so many scores against the Flashes.

I like the full-game total here better than the Missouri team total simply because it gives us more wiggle room. However, I'm really not sure how the Tigers score on Georgia. There are a ton of metrics that justify this, but one of the biggest is stuff rate, a metric that is exactly as it sounds. It measures the percentage of plays stopped at or behind the line of scrimmage., and there's not a single stat that highlights the differences between these two teams as much as this one.

Georgia ranks the best in the SEC with the fewest number of runs stuffed, and Missouri ranks the worst in the SEC. That's a problem for the Missouri Tigers when facing what could be the best defensive front in the country – it's undoubtedly going to be the one with the most NFL draftees.

I see this game going like many do with Georgia against an inferior opponent. They jump on them early and coast to victory with a dominating rushing attack. This matchup will see Missouri struggling at the point of attack and repeatedly getting behind the sticks.

It's impossible to score consistently against Georgia when you do that. I'm very much on the pregame Under cashing in this one, but as a bonus, I'd look to double-down live. Georgia has scored in the first five minutes of each game they've played. Because of that, you may catch a better number live.

I won't dip in here but If I had to lean on a side, it has to be Georgia. It's pretty similar to the handicap of the total. Missouri simply doesn't have the team speed to slow down the pass rush of Georgia. When you can't do that – and you're getting dominated at the line of scrimmage – it's impossible to have any reasonable success against this team.

Playing this number is a measure of estimating Georgia's motivation to cover it. The situational aspect is in your favor. The Bulldogs are clearly capable of covering the number but again, how much will they want to, and how much will their opponent be up for this one?

Even though it won, Georgia is coming off a disappointing performance. This week, they'll get an SEC opponent and will be looking to avenge one of their worst defensive performances in recent times.

Missouri lost in about as painful a way as you can imagine when they fumbled the ball on the one-yard line in overtime and handicapping the motivation for the Tigers is much more difficult. They could conceivably throw in the towel as that disappointment spills into this week, or they could respond. Not knowing a direct answer is why I'm staying off this one.

I expected this spread to be around 28 points, and that's where we're at around publication. I'd look to take Georgia if Missouri pulls an early surprise and scores. If not, I will pass on a side here altogether.

Again, I love the Under here. If you want to add a little Missouri team ttal Under, I don't think that's a bad play, either.

The Tigers are so overmatched on the lines that I don't think they get multiple scores. Getting behind the sticks and getting off schedule against Georgia may be a death sentence. It's hard to get ten yards for a first down against them; you don't need to make it any harder.

In addition to that, I don't expect Georgia to go out of its way to run the score up. They don't need to do that for any type of playoff implications, and they'll want to continue to put less on film if they can help it. Once Georgia establishes an early lead, the clock should run early and often with lots of plays on the ground. Because of that, the pace of this game will help our Under pursuit just as much as anything.

Let's note a few trends before we wrap up our analysis of this one:

Both the trends and the handicap point one way — another low-scoring blowout victory for Georgia.

The Under is 6-0 in Georgia's last six games. Find more NCAA betting trends for Georgia vs. Missouri. 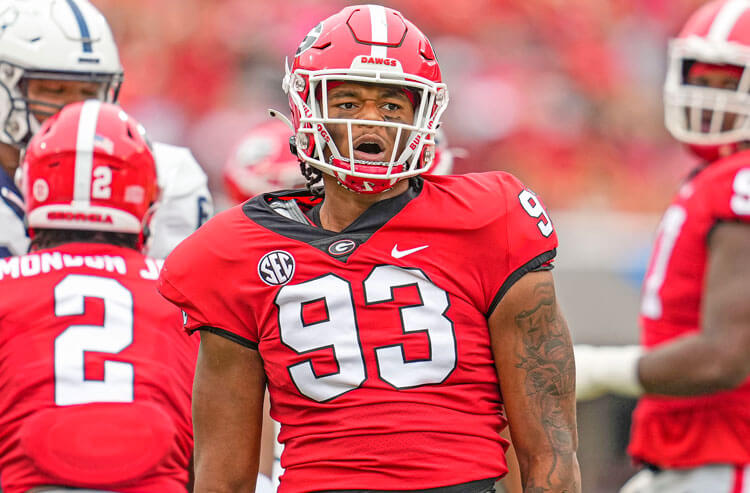