With the Seminoles travelling to Baton Rouge for a primetime matchup with the LSU Tigers, player prop markets have hit the board. We break down our three best player prop plays below — highlighted by LSU wideout Kayshon Boutte.

Labor Day Weekend isn’t over just yet! There’s more college football left to be played and Sunday Night features a good one between the Florida State Seminoles and LSU Tigers.

All eyes will be on Brian Kelly as he begins his tenure in Baton Rouge. The Tigers are slight 3.5-point favorites and anything less than a victory would be a disappointing start.

Despite finishing just 5-7 a year ago, Mike Norvell and the Florida State Seminoles don’t figure to be an easy out.

Since it’s a standalone game, plenty of props are available on the board to bet. Check out our best prop bets between the Florida State Seminoles and LSU Tigers below.

We don’t know who is going to be under center for the Tigers. Brian Kelly hasn’t tipped his hand on whether or not it will be Jayen Daniels or Garrett Nussmeier who gets the start, but the most likely scenario is that Daniels gets the nod.

Regardless of who the signal caller is, they’ll have one of the best weapons in college football at their disposal in Kayshon Boutte.

Boutte’s receiving yards prop is set at 75.5 at DraftKings. The star wideout has appeared in 16 career games and amassed 1,244 receiving yards — good for 77.8 per contest. That alone gives him an edge over the projected number. It’s especially impressive considering Boutte was a minor part of the offense as a freshman in 2020 and didn't become a go-to target until later in the season.

Since becoming a key factor of this offense, Boutte has amassed 1,036 yards across his last 9 games — good for 115.1 yards per game. That’s a truer indicator of future performance, as he’s a legitimate weapon on the field that will be difficult for any secondary to contain this season.

There’s a reason that Boutte is pegged by many to be a first-round NFL Draft pick. He’s a special player and has a chance to showcase that to a large audience in a nationally televised standalone prime-time game. Back him to do just that.

Florida State quarterback Jordan Travis has been given a rushing total of 36.5 at DraftKings.

Travis is a real threat running the football — that’s his identity as a player. Forget to put a spy on him or to accurately account for him on the ground, and you’ll soon be watching him roam free across the field. Despite splitting time at the quarterback position last year with McKenzie Milton, Travis managed 530 yards and seven touchdowns on the ground.

He only appeared in 10 games last season, which puts his rushing yards per game average at 53. That’s well above his rushing yards prop of 36.5 and creates immediate value. The Seminoles have their work cut out for them against a good LSU defensive front, and Travis will be tasked with keeping the chains moving.

With a closely lined game ahead (LSU -3.5), there’s no concern about a blowout impacting this prop. That’s often a concern in Week 1 of college football, where starters aren’t given a full workload against an overmatched opponent. That is far from the case on Sunday and Norvell’s game plan should revolve around keeping LSU’s defense honest and having to account for Travis’ rushing threat.

Another Florida State Seminole that I have my eye on is running back Treshaun Ward. The former walk-on impressed last season in limited duty, averaging 6.4 yards per carry on only 81 attempts while playing a complementary role to starter Jashaun Corbin.

Corbin is now off to the NFL and starting duties have been relinquished to Ward. The offseason hype was on Oregon transfer Trey Benson, but Ward was the one who had two first-half touchdowns and had the overall more impressive showing in Week 1 despite both backs playing well.

This will be a rotation in 2022, but I expect Ward to be the lead dog. Where does that leave us for Sunday?

Ward’s receiving prop is listed at 14.5 over on DraftKings. Last season, Ward caught 22 passes for 167 yards and a touchdown. That’s good for 13.9 yards per game, which is actually slightly below his prop for this game.

Ward should see an uptick in usage this season as the current RB1 on the roster. He’s no longer an afterthought in the room or a player who should exclusively be known as “the former walk-on”.

Rather, he’s a starting running back for an ACC team that wants to run the ball for 200 yards a game. This team doesn’t have an alpha wide receiver and I expect Ward to be utilized in the passing game more this season.

He’s a better player than most give him credit for and he could play on Sundays with a strong season in 2022. 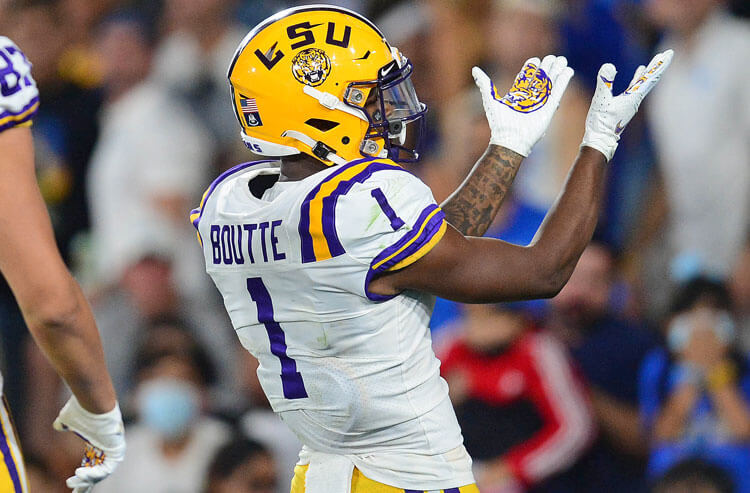